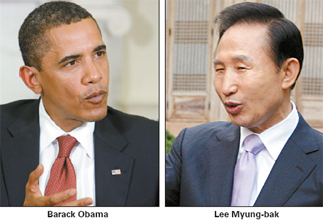 WASHINGTON - In a summit here this morning with U.S. President Barack Obama, President Lee Myung-bak was to propose five-party talks as a new framework for resolving the North Korean nuclear threat, according to a high-ranking Blue House official.

Under the new proposal, the five parties will consult on Pyongyang, then the United States and North Korea would enter into bilateral negotiations. In a June 13 interview with the Wall Street Journal, Lee said it was “very important for the remaining five countries - which excludes North Korea - to agree on the way forward.”

The five countries are South Korea, the U.S., Japan, China and Russia. Lee’s two former predecessors - Kim Dae-jung and Roh Moo-hyun - supported the six-party talks framework launched in 2003 by the Bush administration. The Blue House official said the new framework indicates Lee’s strong desire to break the past conventions of giving North Korea “carrots,” such as economic aid, whenever the state broke promises with the international community and took provocative actions.

The two national leaders were scheduled to start summit talks at 11 a.m. Tuesday, local time, in the White House Oval Office. A joint press conference and luncheon will follow. The whole process is expected to take around two hours, according to the Blue House.

This is Lee’s second Washington visit since his inauguration earlier last year. Earlier, Lee had a summit meeting with then U.S. President George W. Bush. Lee met with Obama at April’s G-20 summit in London.

After arriving in Washington Monday afternoon with First Lady Kim Yoon-ok, Lee was first greeted by U.S. Trade Representative Ronald Kirk. In their 30-minute conversation, Lee urged the U.S. to ratify a free trade agreement inked around two years earlier, saying enactment of the deal will not only benefit both countries but also help strengthen the overall alliance.

Kirk promised to proceed with the ratification, adding that Obama is willing to carry out what had previously been promised. The U.S. trade envoy’s remarks signal significant progress of the deal, given that Obama said during the presidential campaign that the pact heavily favored Korean automakers.

Later in the day Lee met with other U.S. top officials, the presidential office said. Lee and U.S. Secretary of State Hillary Clinton reaffirmed their alliance in coping with the North. Clinton called for close cooperation among South Korea, the U.S. and Japan in implementing the UN sanctions to “get North Korea to realize that its bad behavior will bring due consequences.”

Lee responded that “as long as the United States and its allies maintain a firm stance, North Korea’s belief that it will be rewarded for its bad behavior if it waits long enough will dissipate,” according to the Blue House.

Lee and U.S. Treasury Secretary Timothy Geithner agreed in a separate meeting that it is too early to declare the world economy has recovered. Geithner praised Korea’s “prompt and pre-emptive” action on the crisis, the Blue House said.

QR codes to be required at bars, clubs to contain virus