Neon shines brightly during the bustle on Yeouido stock street

Neon shines brightly during the bustle on Yeouido stock street 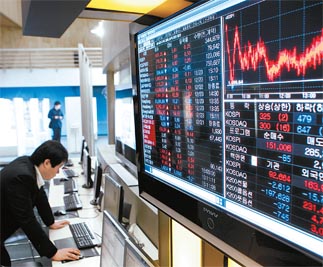 On the fourth day of the new year yesterday, the heaviest snowfall on record in Seoul blanketed the fast-paced city and its inhabitants in white. The snowfall led to road blockades and offices closing early but the stock display at the Korea Exchange building in Yeouido shone bright in neon, with the benchmark Kospi finishing at 1696.14.

The Yeouido stock street holds the history of Korea’s capital market, dating back to the 1970s, when stock exchanges were difficult due to a shortage of phone lines.

Before Yeouido, most securities companies were located in Myeongdong, forming one by one after Korea’s independence from Japanese rule.

After the country was freed, there was high demand and hope for a local stock and bond market. Song Dae-sun, the first head of Korea Financial Investment Association, created a cooperative group in 1947 comprised of a few traders. In November 1949, Korea’s first securities firm, Daehan Securities (now Kyobo Securities Co.), opened in Myeongdong.

“Myeongdong was the heart of the city at the time, so, naturally, money transactions started to take place there,” said Chung Won-koo, a director at the Kosdaq market division at the Korea Exchange. Chung started his career at the exchange during the late “Myeongdong days” in 1977.

“There were no stock transactions. Almost all exchanges were in Treasury bonds,” he remembered.

One executive, who declined to be named, also a part of the “Myeongdong generation,” said, “At the time, no trader made a lot of money because the market was just beginning to form. All the money back then was concentrated on manufacturing and machinery building.”

After Daehan, numerous other firms started opening up, including Koryo Securities, Yeongnam Securities, Kookjae Securities and Tongyang Securities. After the Korean War, the Korea Exchange opened in Myeongdong in March 1956.

“You wouldn’t be able to imagine the market back then,” said Kim Jong-chan, another director at the Korea Exchange who had participated in writing a book on Yeoiudo’s history.

“From the outside, traders back then looked more like some street vendors trying to sell lighters. 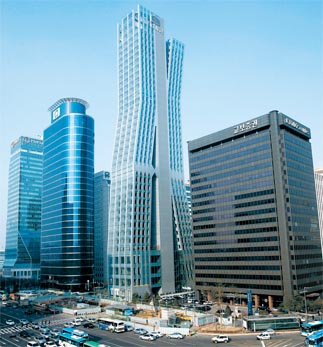 “It looked nothing like the images you would see of Wall Street in movies,” Kim said.

Yeouido only started to take the shape of a proper financial district after the Korea Exchange moved its headquarters there in 1979.

“Moving to Yeouido was a natural transition, as the government was pushing to develop the area into a financial center. Securities companies agreed to move to the area, thus forming Yeouido stock street,” said Chung.

In the 1980s, Yeouido stock street saw rapid development. Some companies even went abroad in their operations and the number of firms increased as well.

“The first wave of real growth came after 1985 when the market first went into the black. There were almost 200 listed firms during that time,” said Kim, adding that the second wave came after the 1988 Olympic Games in Seoul.

With the ups and downs of the Yeouido stock street affected by the global financial climate, there are around 80 companies which have now disappeared. One was Hanheung Securities, which was founded in 1954 and later changed its name to Hanil before changing again to Hanvit. It finally merged with LG Investment and Securities Co. Others, including Shinwu Securities and Sungyeong Securities, followed similar paths, changing their names over the years.

The Asian financial crisis was a brutal time for the Yeouido stock street. Many firms, including Hannam and Saneun, were ordered to suspend business. Even securities firms operating as subsidiaries of banks, including Chohung Securities and Boram Securities, found themselves in trouble and eventually closed.

The new millennium signaled a hopeful start, however.

“From the 2000s, especially after 2005, there was a strong ‘fund’ trend in the Korean stock market,” said Kim. “Funds soared and many people earned a lot of money during these years. Yeouido firms’ interactions with foreign securities firms started becoming more active.”

Although the global economic slowdown starting in 2008 proved to be another hard blow for Yeouido, the new Capital Markets Consolidation Act which took effect in 2009 allowed for many restrictions on traders to be eliminated and opened the doors for freer exchanges in the market. 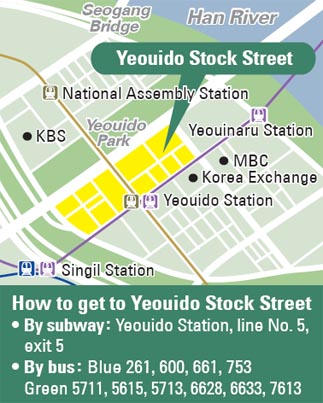 Another fact that let Yeouido stock street grow was the development of communications networks.

“In the early days, we used bulletin boards and paper to write down individual transactions by hand. However, this began to take too much time and labor, not to mention a lot of mistakes in numbers,” said Kim.

“After several big mistakes cost us quite a bit, we replaced our old manual system to computerized versions starting in the late 1980s.”

At the moment, there are 60 registered securities firms in the area, including foreign and local companies.

“The important thing for Yeouido stock street in terms of future growth is to create a stable basis for the stock market,” said Chung.

“The Korean stock market, much like the temperament of Koreans, is very ‘hot pot’ [meaning that things boil fast but cool down just as fast]. In order to keep a steady flow, there needs to be a strong, steady foundation for the market which will not wither with a simple change in direction of the wind.”