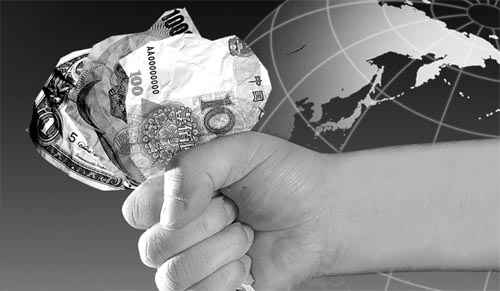 The ongoing currency dispute among major countries has had a negative impact around the globe. Korea is likely to face difficulty mediating the dispute at the upcoming G-20 Summit in November. [JoongAng Ilbo]


The world is in the midst of a war, but it is not the kind of war you may be imagining. It is a currency war in which nations compete to lower the value of their currency in order to help their industries gain greater profits from exports.

The currency disputes have arisen from a conflict of interest between the United States and China.

The U.S. has been struggling against a massive fiscal deficit and foreign debt in recent years, especially since the global financial crisis. With so much at stake, the era of U.S. dollar hegemony seems to be ending.

China has been raking in profits from its biggest export market, the U.S., by keeping its yuan, also known as the renminbi, undervalued. China has also been purchasing U.S. treasury bonds to add to its foreign reserves, worth more than $2 trillion.

In September, the U.S. House of Representatives passed the Currency Reform for Fair Trade Act with a vote of 348 to 79. Under the bill, the U.S. is allowed to slap tariffs on goods from China and other countries with currencies that are perceived to be undervalued. Basically, the U.S. is pushing China to allow the yuan to appreciate.

“For so many years, we have watched the China-U.S. trade deficit grow and grow and grow,” House Speaker Nancy Pelosi said on the day of the vote, which was on Sept. 29 local time. “Today, we are finally doing something about it by recognizing that China’s manipulation of the currency represents a subsidy for Chinese exports coming to the United States and elsewhere.”

But China does not want the value of its currency to increase because a stronger yuan will hurt Chinese exporters who will see a decline in exports to the U.S. once the currency’s value rises. 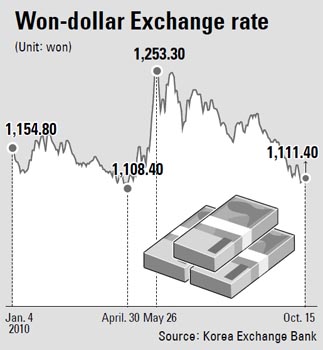 The Chinese renminbi was fixed against the dollar from July of 2005 until June 2009. With a fixed exchange rate, a currency’s value is matched to the value of another single currency or to a basket of other currencies. So when a country pegs its currency to the dollar, the value of the currency rises and falls with the dollar. This action helped China survive the global financial crisis. But China removed the dollar peg after the global financial crisis ended last year.

Meanwhile, Japan has also seen the value of the yen grow stronger. With the U.S. economy continuing to lag and growing fiscal uncertainty in European countries, the yen has continued to gain strength because it was the only currency that was stable. So countries like China expanded their purchases of the yen, resulting in the yen’s appreciation. As the yen continued to rise against the dollar, the Japanese government intervened in the currency market in September for the first time since March 2004.

This is not the first global currency war the world has seen. In 1985, the finance ministers of West Germany, France, the U.S., Japan and the UK gathered at the Plaza Hotel in New York to sign the Plaza Accord. Under the deal, the countries agreed to bring down the U.S. dollar exchange rate in relation to the Japanese yen and German mark.

As the recent currency war continues to spread around the globe, some countries are now saying that there is a need for a new Plaza Accord to stabilize the world economy and the global financial market.


The effect on the Korean won

Amidst the recent currency disputes, the local currency has gained strength. But when the value of the won increases it has a negative impact on the nation’s exports. Why?

Korea is one of the countries negatively influenced by the ongoing currency war between the U.S. and China.

“[Korea’s] exports are expected to be influenced by major economies more than in the past because the effect of the strengthening of the won, which has a positive effect on the Korean economy, will mostly be removed,” said Kim Jae-hong, an economist at Shinyoung Securities.

For Korea to see its exports stabilize, advanced countries’ economies need to recover to a moderate degree, Kim added.

In fact, a recent study by the Samsung Economic Research Institute said that if the won-dollar exchange rate hits 1,050 won, around 91 domestic export companies could see a drop of nearly 6 trillion won in operating profit. In other words, the stronger the value of won, the lower a company’s profits from exports.

Besides such theoretical concerns, another thing worrying the nation is Korea’s role in the upcoming G-20 Summit in November. As the host country, Korea will have to serve as arbitrator among the G-20 countries to prevent disputes between the member nations.