A group of people visits Haneul Park, located at the highest elevation of the four parks at 98 meters (107 yards) offering a fine view of the Han River and southern Seoul, on March 3. By Park Sang-moon

Chung Woon-suk, 72, has lived in Mapo District, western Seoul, for 36 years. For the past decade, she has made an effort to take a two-hour constitutional at least once a week in Seoul World Cup Park. It’s good for her health.

“The unusually prolonged cold weather this year kept me from coming as often as I like,” said Chung last week while taking a break after climbing 292 steps to the summit of Haneul Park, one of the four parks comprising the World Cup Park. “It’s hard to imagine our lifestyle without this park. It’s such a huge turnaround from what it used to be some 20 years ago.”

The park’s distant ancestor was Nanjido, an island in the Han River once known for orchids, peanuts and melons. In 1978, Nanjido’s destiny took a turn for the worse when the Seoul government designated it a garbage heap and landfill site where much of the garbage of the growing city was sent. It was soon nicknamed “Island of Death” for its deathly stench.

“At the peak of its use as a landfill in the ’80s, its foul smell made its way into every household in the neighborhood areas, especially during the evenings,” said Kim Hoon-ki, a self-employed man who has lived in Mapo for decades. “It was foul.”

Seoul World Cup Park is not only an emblem of Seoul’s transformation from a third-world city smelling of garbage to a modern metropolis with an appreciation of urban green zones. It also shows that with political will and technology even a towering heap of garbage can be made into something people can grow proud of. Other countries going through Korea’s development trajectory have come to study Seoul’s success with the park, especially China.

“I was actually one of the crew members for Samsung Construction, which participated in the creation of this park and the Sangam World Cup Stadium,” said Kim, 48, who was strolling on a park trail with his wife last week. “I’m proud to be a part of the wonderful change.”

Seoul grew rapidly in the 1970s and ’80s as Korea industrialized and people from the countryside were drawn to the country’s main metropolitan area.

Nanjido became a dump and landfill site in 1978. In the next 15 years, over 92 million tons of garbage were dumped there. According to the Seoul City Government, that amount of garbage is the equivalent of garbage unloaded from 13 million 8.5-ton trucks.

In 1993, the landfill was 98 meters high, much higher than the international norm of 45 meters, and it was closed. The government deemed that it couldn’t handle any more garbage. 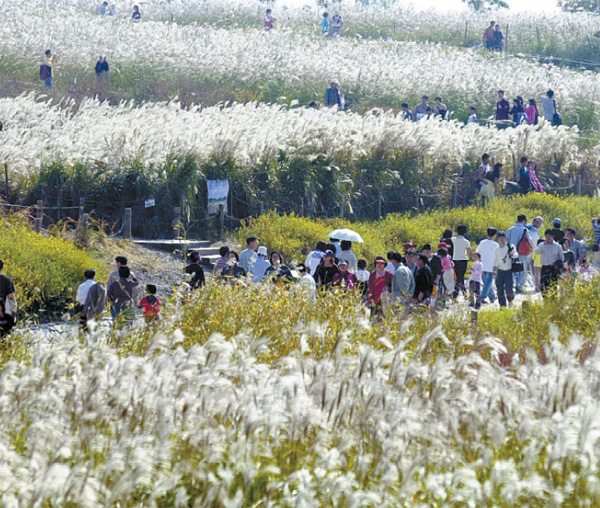 People visit Haneul Park, one of the four parks comprising the World Cup Park in Sangam-dong, western Seoul, strolling by fields of flame grass during the fall season. Of a total of 6.5 million visitors last year, 3.7 million visited the park in October. [JoongAng Ilbo]

What followed was a bold idea: To turn a mountain of household and industrial waste into the gold of a new urban district of 1 million square meters (247 acres) through a Landfill Recovery Project initiated by the Seoul city government.

“The recovery project was initiated in the early 1990s as part of a new city project at the time to build what is now Sangam Digital Media City in western Seoul,” said Chung In-cheon of the World Cup Park management team.

The project began with the closing of the site, which stretched for 2.4 kilometers in 1993. Then the garbage had to be stabilized enough for it to be used for construction or any other purpose and leakage of polluting elements also had to be stopped.

“The construction included setting up a wall to contain sewage and burying the garbage site in massive amounts of earth, which cost 140 billion won ($129.3 million),” said Park Sae-bom, an official at the Seoul Metropolitan Government’s Seoul World Cup management team.

“It took five years from 1996 to 2001 to complete a stabilization of the site,” she said. Another 95 billion won was spent to create the park after the stabilization.

The garbage down below is still producing gasses, mainly methane and carbon dioxide, and the park is dotted with pipelines and wells that collect the gasses and transport them to the Korea District Heating Corporation.

There are 106 gas wells the park at intervals of 120 meters.

“Those gases are transported to the heating corporation to go through a recycling process to be used as an energy source for Sangam neighborhood residents,” said Park.

An amazing element of the transformation is the area’s rebirth as a home of wild life and plants. Since its opening in 2002, the diversity of wild plants and animals in the park has more than doubled, the Seoul city government reported on Feb. 25. 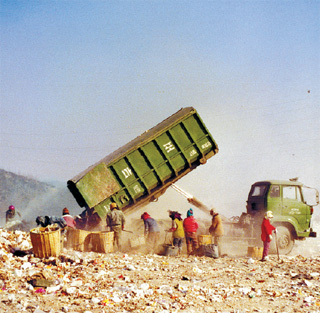 The World Cup Park, now beloved by the public, was a landfill site for 15 years from 1978 through 1993, the destination of waste generated by Seoul during the period of rapid economic growth. Over 92 million tons of garbage were dumped there. Provided by the World Cup Park

The city office reported that 486 plant species and 484 animals reside there, more than a two-fold jump from a combined 438 species reported in 2000.

Last year alone, 20 new plant species were found at the park. Wildlife such as weasels and snakes are found there.

“One special aspect of the park’s ecology is the increased presence of plants whose seeds are thought to have entered the site in the ’80s and early ’90s as part of garbage,” said Park.

The park’s walking trails are so popular that over 6.5 million people visited last year.

“October is the most crowded month because of a fall festival held at the park,” said Koo Ja-il, another management team officer.

The highest elevation of the former garbage heap is now 98 meters at Haneul Park, which affords a fine view of the Han River and southern Seoul.

Foreign officials are also coming to take a look to see if they can replicate the feat in their countries.

“The most have come from China, which is undergoing rapid industrialization and accelerated environmental damage. Around 200 Chinese government workers visited last year.”

“I came here today from Incheon,” said 23-year-old student Park Hee-hyun as she unpacked lunches at Haneul Park with her boyfriend, who was having a day off from military duty. “Finding a place like this is very hard either in Seoul or its surrounding areas. So I think the long ride it takes to reach her was well worth it.”

At Haneul Park, Mrs. Kim, 72, is picking naengi, known in English as shepherd’s purse, to use for cooking at home.

Asked if she was concerned about possible contamination because of the park’s history as a garbage dump, Kim replied, “Not a bit.”