Large portrait sculptures made of resin and life-size portraits of vinyl on wood by British artist Julian Opie are seen here installed in the K3 space of Kukje Gallery in central Seoul as part of his solo show running until March 23. By Keith Park

What would the images of contemporary people walking on the streets of Seoul look like interpreted by a foreign artist, such as the famous Julian Opie?

The British artist, well known for his simplified human figures, edged with bold black lines and full of dynamism, is now exhibiting several paintings - or, technically, flat sculptures, as they are made of vinyl cutouts on wooden stretchers - depicting the city’s pedestrians in his signature style.

They are part of his solo show at the K2 and K3 spaces of Kukje Gallery, in the art zone east of Gyeongbok Palace, central Seoul.

The works depict in vivid colors men and women viewed from the side, walking through Sinsa-dong and Sadang-dong. Whereas their features are simplified, their bags, sunglasses, mobile phones and other accessories are all depicted in stylish detail.

He made the works based on thousands of photos he had commissioned of Seoul’s streets. 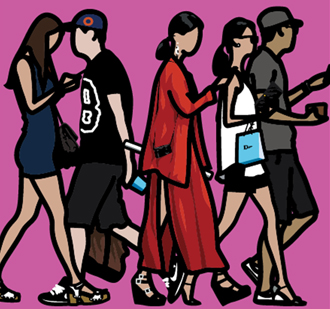 “Walking in Sinsa-dong 1” (2014) is one of the works by British artist Julian Opie made based on photographs of people walking on Seoul’s streets. It is part of his ongoing solo show at Kukje Gallery. Provided by the gallery

“When I saw the photos, I was amazed at how well-dressed they are,” he told reporters at the gallery last week. “Each individual seems to have a project about themselves.

“And more details - more accessories - caught my eyes, especially mobile phones! It seemed that about 80 percent of young people were carrying phones,” he added, laughing.

“And I saw more colors, but could seldom find shadows, unlike from London photos. Accordingly I decided to use vivid colors and highlight the accessories.”

Regarding the works, Kukje explained, “Framing crowds of people on the street and in markets, these articulated groups are composed in what resemble historical friezes, presenting a drama of shopping and hurried commuting, highlighted by fashion choices and handbags.”

“Using only black-and-white LED lights, these familiar moving signs evoke a kind of melancholy poetry as they showcase the quiet unassuming movement of tourists and everyday street-goers,” Kukje said.

“As for these works, I dropped colors to focus on movements,” Opie said. 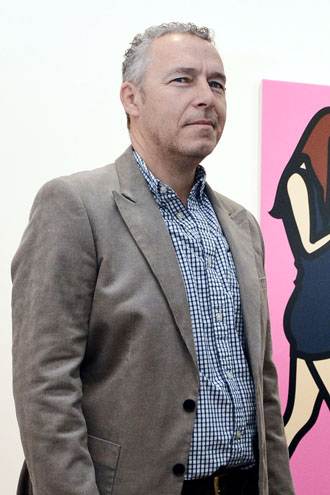 Kukje Galley also quoted Opie on this subject, saying, “Stop for a moment on any street and watch the passing crowd. There is a beauty and energy in the striding figures. Each person wrapped in their own purpose, dressed in their own way, combining with strangers to create a constantly changing, random dance.”

Opie’s works simplified through the computer will remind people of modern pictograms and might seem to have no relations with traditional Western paintings.

But the artist said he has been inspired by old artworks. For example, works depicting pedestrians viewed from the side were influenced by the murals in ancient Egyptian tombs and temples.

A group of life-size full-length portraits of ordinary people near the London Eye, a giant Ferris wheel and tourist spot in the British capital, are also part of the exhibit.

“In the past, full-length portraits were exclusively for kings, queens and the nobles, and they took grand poses in such portraits,” Opie said. “But my works are portraits of ordinary people unconsciously taking various poses while seeing the London Eye.”

When asked why he is concerned about old paintings, he said, “We exist on the very surface of history.”

His newest works - giant portrait sculptures, made out of dense resin and painted with the same palette and iconic style as his flat vinyl works - also remind people of classic sculptures. “Reminding us that historical sculptures were also polychromed in their days,” Kukje said.