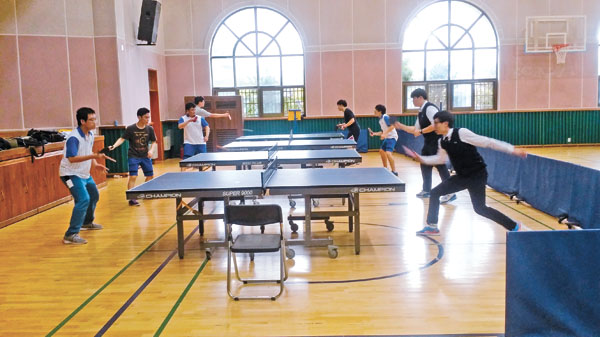 
Four sophomores at Bundang High School in Bundang District, Gyeonggi, were playing table tennis in the corner of the school gym at 8:10 a.m. on Oct. 7. Not far away, about 20 students were playing basketball and badminton.

“My friends sometimes make a date to play badminton in the morning as the school is starting an hour late,” said Kim Myeong-jun, a sophomore. “If I don’t play badminton, I come early and read some books.”

As of Sept. 1, the Gyeonggi Provincial Office of Education recommended that schools in Gyeonggi start at 9 a.m., delaying the opening bell for most of them by an hour. The initiative was aimed at giving students more time in the morning to have breakfast with their families - or get more sleep.

Some criticized the change saying it would disrupt students’ life rhythms. Some seniors are worried about getting used to the late start because the all-important college entrance exam has a starting time of 8:40 a.m.

But the initiative brought one unexpected change to some high schools: early-bird students are making use of the extra hour for studying, socializing or playing sports.

At 8:20 a.m. on Oct. 7 at a different high school, Seohyun High School in Bundang, four sophomore students were holding a discussion about U.S. economic difficulties. They named their discussion club “Show Me the Money” and meet for 40-minute discussions at 8 a.m. twice a week.

“I welcome the change because I can use the time in my own way instead of studying in class waiting for school to start,” said Lee Kyeong-hun, a sophomore at Seohyun High School, who leads the club.

Other high schools in Gyeonggi cities such as Uijeongbu, Anseong, Gwacheon, Goyang, Paju and Bucheon are also taking advantage of the free time in the morning. Hyoja High School in Uijeong city has seen an increase in student club activities in the mornings. The school used to have five voluntary morning clubs organized by students, but the number grew to 10 this month. The themes include cartoon theory, psychology and cooking.

Some teachers contribute to the voluntary morning clubs upon the students’ requests. At Jukjeon High School in Yongin, when students said they wanted do something different, the music teachers organized an orchestra called “The Morning Brass Band.”

Gwacheon Women’s High School in Gwacheon did a survey of students before the change and there was a big interest in diets and weight loss. As a result, teachers who specialized in dance organized a yoga class, which 15 students and teachers are participating in.

“The consulting program used to be an afterschool program, and many students skipped it because of their afternoon schedules,” said Gwon Cheon-suk, vice principal of the school. “Now many more students are willing to participate in it. We are planning to post a notice on the website at Gyeonggi Provincial Office of Education to invite college students to come give advice.”

Of 2,250 elementary, middle and high schools in Gyeonggi, 90.1 percent of them have delayed their school starting time to 9 a.m., and 15 to 20 percent of those schools run voluntary morning programs, according to the Gyeonggi Provincial Office of Education.

Schools without formal morning programs are seeing early-bird students studying by themselves.