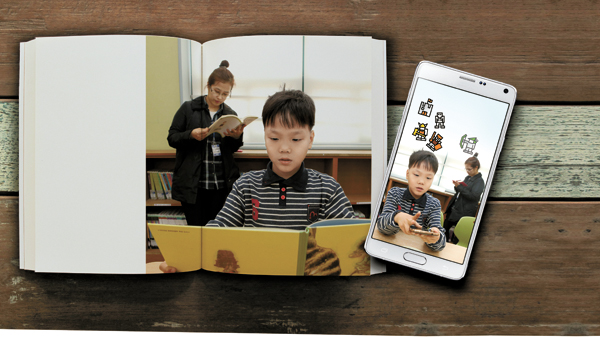 Lee Kyeong-hee, a parent who supervises after-school reading activities, and Lim Soo-hyun, a first grader at Daeyoung Elementary School in Seoul, read books at the library as part of an extracurricular class. Lee thinks that parents’ overuse of smartphones can be a bad influence on children. By Oh Jong-taek

Soeui Elementary School in central Seoul encourages parents of students to read to their children for 40-minute stints as part of a regular extracurricular class.

The school has carried out the activity since Principal Shim Yeong-myeon took office in 2011.

Members of a reading club supervise a reading activity on Nov. 25 at Daeyoung Elementary School.

“I learned from research published in the U.S. that when parents read books to kids, necessary brainwaves are sent to the kids’ brains, ultimately triggering them to like reading books,” Shim said.

“So I tried applying that to my school, and it seems as though the students like it.”

The students also read books with each other, with older children reading one on one with younger kids.

The number of books each student has checked out from the library has increased from 19 in 2009 to 85 last year. The statistics imply that each student borrows more than one book every week.

“Kids start to show interest in reading on their own after parents read to them,” Shim said. “And that is the starting point of reading books.”

Cho Hye-kyeong is a mother of a 7-year-old daughter who would not pick up a book two years ago, preferring to watch television. Although Cho bought English books for her daughter, she would sit or scribble on them rather than read.

“But I kept reading books for her, such as those that have princesses in them, ranging from traditional to foreign fairy tales,” Cho said.

“Then my daughter started to show differences one day, opening up a book herself.”

Cho said her daughter now reads three books every day. Sometimes, she even makes up a story based on her reading when she completes a tale, Cho said.

Kim Soo-kyeong, a professor at Changwon Moonsung University’s library department, emphasizes that reading to children should not stop once the students reach a higher grade in elementary school.

If a child becomes interested in reading books, the next step is to praise their efforts, childhood education experts say.

When Oh Ji-hwan, an 11-year-old, finished a whole series of fantasy novels instead of educational books, his mother, Kim Eun-young, still praised him.

When Oh asks off-the-wall questions regarding the novels, Kim doesn’t underestimate his ideas. Instead, she complements his efforts to be investigative.

Gradually, as a result, Oh has started to expand his reading interests to fields such as philosophy or literature.

Hur Yong-rim, a professor at the department of education at Kookmin University, says the home environment is critical in creating a foundation for children to become interested in reading.

Kim Eun-yeong who has earned a certificate in reading education, emphasized the importance of a parent’s role. It is parents who best understand their kids’ tendencies, Kim said.

One of the most important things when supervising reading at home is for parents not to force their own recommendations on the child. Parents should also not scold children for sticking to certain genres when reading.

Lee Kyeong-hee’s fifth-grade son only liked to read science books. After her son read a book that he enjoyed, Lee started to read him stories about historical heroes - a genre far from her son’s interests - little by little.

Gradually, her child began to show an interest in these tales.

“In terms of leading kids to read a variety of books, it can be likened to chopping vegetables up and hiding them in food,” said Prof. Kim Soo-kyeong.

When kids reach middle school, it is necessary to increase the level of difficulty of the books they read, going beyond those that are for fun, said Hong Ji-yeon, a professor at the department of childhood at Kyungmin University.

“Besides best-sellers at bookstores, it is recommended that middle school students explore diverse fields of books that touch on ideas such as cultural knowledge or philosophy, or something that provokes their curiosity,” Hong said.