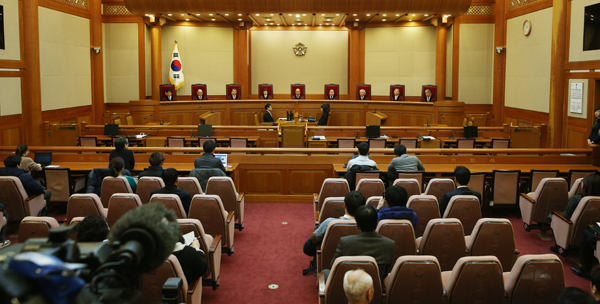 The Constitutional Court struck down the 62-year-old adultery law in 7 to 2 decision on Thursday. By Kim Sang-seon

The Constitutional Court on Thursday struck down the long-standing adultery law that made Korea one of a very few non-Muslim countries that punish cheating husbands and wives with prison terms, reflecting changes in a culture that now stresses the importance of individuals’ rights over the state’s intervention in the name of common good.

In a landmark seven-to-two decision, the court declared Article 241 of the criminal code, which was written in 1953, unconstitutional because it infringes upon people’s privacy rights and sexual freedom. Immediately after the ruling was announced, the anti-extramarital affair law lost any legal validity, freeing around 600 people being prosecuted for adultery.

Under the 62-year-old law, a married husband or wife caught cheating faced up to two years in prison. A third person involved in an affair was also subject to legal punishment even if they were not married.

In a joint statement of opinion, five justices said that because of changes in public attitudes about the state policing marriages, there was a mismatch between the law and a legal respect for individual rights.

The five judges also said that the controversial law had strayed from its original intention of acting as a deterrent against extramarital affairs and was now misused by estranged spouses in divorce trials as a way of winning more assets in a settlement.

“While it is now perceived that the law fails to achieve a public objective of protecting the integrity of marriage, it encroaches too much upon individuals’ basic rights of self-determination for sexual conduct, thus losing the right legal balance,” ruled the five justices.

They also cited a growing legal trend internationally that adultery is an outdated crime in an era of respect for individual choice and privacy.

In his decision, Judge Kim Yi-su ruled that the adultery law was unconstitutional because it also penalizes unmarried people for having an affair with married people even though they were not bound by the code of conduct mandated by marriage. Judge Kang Il-won stated that even though he saw a social need to have such a law against extramarital affairs, it still conflicts with constitutional values because it subjects cheating husbands and wives to prison terms without taking into account different levels of infidelity.

Two judges opposed repealing the law, saying its eradication will lead to a downgrade in ethics surrounding sex and cause more sexual misconduct.

“Adultery is not only a personal or ethical matter but is an issue that undermines the social order and violates the rights of others,” stated Justices Ahn Chang-ho and Lee Jung-mi, who was the only female judge on the nine-panel bench. To back up their position, the two cited a public poll of 2,000 adults conducted last year that showed 60.4 percent of respondents support the anti-cheating law.

The two judges said that because of its detrimental effect on families and the social order, an extramarital affair should not be viewed as a self-determination right for sexual conduct.

With the law repealed, law enforcement officials will not be mobilized to collect evidence of marital infidelity, such as filming sexual contact between two parties.

Such evidence was usually used to win greater divorce settlements.

This was the fifth time in 25 years that a petition to abolish the controversial law was brought before the Constitutional Court. All four previous rulings maintained the law, saying the social order had to be maintained, a reflection of conservative Korean culture.

But in a 2008 ruling on a motion put forward by actress Ok So-ri, who was indicted for adultery, five of nine judges supported the law’s abolishment, which was the first time that a majority called it unconstitutional. But six out of nine votes - or two-thirds - would have been needed to strike the law down, and Ok received an eight-month suspended sentence as a result.

With the court’s ruling Thursday, 2,973 men and women convicted of adultery since the 2008 ruling, which was delivered on Oct. 30 that year, can appeal to overturn their convictions and claim compensation, including for legal fees and any period of time they spent behind bars. Only those who have been indicted or convicted since the ruling seven years ago are eligible for re-trials and compensation.

As Korea moved to null the controversial law, Taiwan and the Philippines are part of the handful non-Muslim countries that still have anti-adultery laws on their books.