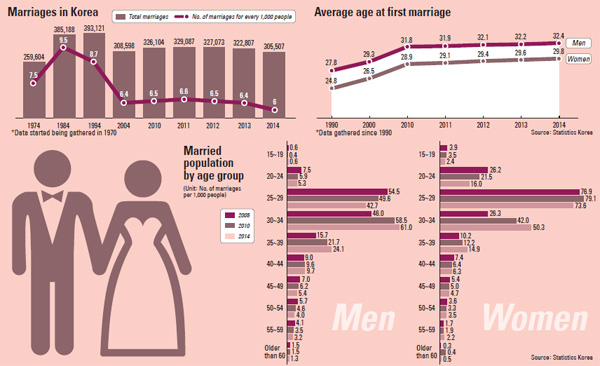 Last year, only six in 1,000 Koreans wed, Statistics Korea said on Thursday, adding that many young people in their 20s and 30s are either postponing marriage due to economic changes or because they generally believe the institution is no longer necessary.

This is a record low, following 2009 when only 6.2 people in 1,000 tied the knot. And it’s significantly lower than the 9.2 people in 1970, when researchers first started collecting data.

Those marrying for the first time are also doing so later, the statistics agency said.

“The trend of delaying marriage has become a new norm for both men and women,” said Yoon Yeon-ok, the director of the Population Statistics Department at Statistics Korea. “More men are marrying now in their early 30s, in a trend that has completely settled, while the [average age] for women is also shifting from the late 20s to the early 30s.”

The steady rise in the number of unmarried people is also another factor dragging down the overall marriage rate. Due to changing perceptions, many Koreans no longer believe marriage is necessary.

However, Korea’s number is relatively high considering the idea of cohabiting unmarried couples with or without children is more culturally and legally accepted in those societies.

“The Korean government needs policies that encourage marriage,” Yoon pointed out, adding that number of young people ages 15 to 24 who believe marriage is mandatory has steadily decreased since 2008.

Another contributing factor in the reduction in the married population is the decline in international marriages, particularly between Korean men and foreign women.

“The government has strengthened regulations on international marriage brokers as well as the criteria for issuing marriage visas to immigrants, so since 2010, the number of marriages between Korean men and foreign women has decreased at a sharp pace,” Yoon said.