Actor Choi Min-sik took home the grand prize at the 2015 edition of the ceremony on Tuesday evening for his portrayal of the complex, emotional battle of Admiral Yi Sun-sin (1545-1598), one of Korea’s most beloved war heroes, in the record-setting film “Roaring Currents” (2014).

Na Young-seok, the star TV producer behind some of Korea’s most watched and talked about entertainment programs such as “Grandpas Over Flowers,” also won the grand prize at the awards, which honors talent in both film and television.

This marks the first time an entertainment show producer has clinched the grand prize in the event’s half-century history, which some critics say reflects how these programs are the hottest format on Korean TV nowadays compared to drama series, which formerly dominated the tube. 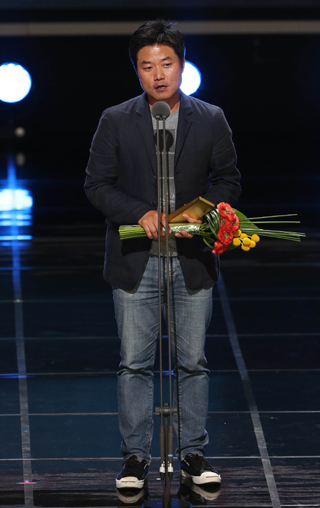 It was notable that Baeksang honored impressive acting skills regardless of how popular the actors were or the length of their career.

For instance, actor Lee Sung-min, who delivered the regrets and passion of a middle-aged, average Korean office worker in tvN’s drama “Misaeng” (2014), won the best actor award in the TV category. Before the show, Lee had mostly played supporting roles and hadn’t received much spotlight. It was the actor’s first Baeksang.

In fact, “Misaeng” was one of the brightest stars at the awards, beating rivals from terrestrial channels KBS, MBC and SBS, which are the usual winners. Both the best director award and the best male newcomer award went to two of the people behind “Misaeng”: producer Kim Won-seok and actor Yim Si-wan.

“Viewers saw from ‘Misaeng’ more than what I performed in it,” Yim said. “It goes to prove that ‘Misaeng’ had that much more significance and that there are many ‘Jang Geu-raes’ in the world,” referring to the character he played, an entry-level office worker who lacks wealth and higher education. 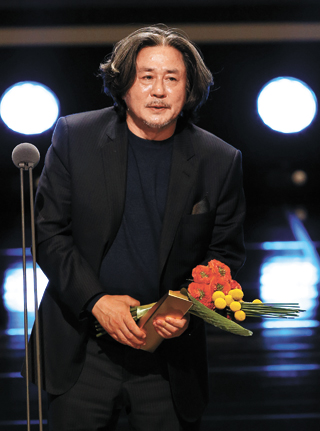 For best actor in the film category the jury decided Lee Sun-kyun and Cho Jin-woong of action movie “A Hard Day” (2013) were equally as deserving and conferred on both the award. It was the first time in 40 years for the best actor award to be given to two individuals. The best movie director award was also given to Kim Seong-hun of “A Hard Day.”

As for the best actress award in film, veteran Yum Jung-ah, who played an irregular worker at a mart facing a sudden layoff in “Cart” (2014), took home the prize. The same award in TV went to Song Yun-ah, who played an equally desperate character in MBC drama series “Mama” (2014), about a single mom who becomes terminally ill.

SBS series “Heard it Through the Grapevine” received the best drama award. Go Ah-sung, who appeared on the show, took home the best new actress award.

“I found the screenplay [of ‘Heard It’] so interesting that I’m concerned I’ll find all the scripts I’ll get in the future to be dull,” she said.

“Revivre,” a movie by veteran director Im Kwon-taek, won both best film and best supporting actress (Kim Ho-jung). The movie stars Ahn Sung-ki as a man who finds himself attracted to a young and beautiful woman while his wife is dying of a brain tumor. Kim Ho-jung plays the wife.