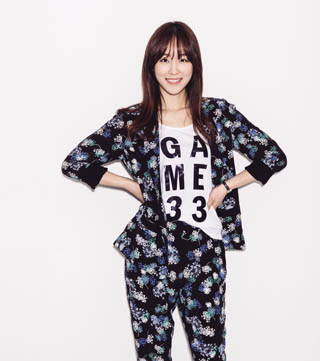 There are many former girl group members in Korea trying to make a name for themselves as actresses.

But the truth is few succeed.

Seo Hyun-jin, formerly a member of girl group Milk, is one of the few lucky ones. After her recently concluded tvN drama series “Let’s Eat 2,” she’s now emerged as one of directors’ top choices for main character for romantic comedies.

In the drama - which was about one-person households in Korea and presented a lot of dining scenes - Seo’s down-to-earth eating and at-times comical character won the hearts of many viewers.

In a recent interview with the JoongAng Ilbo, an affiliate of the Korea JoongAng Daily, Seo said she is, in fact, very shy in person.

Q. Many say in the drama, you were the character, Baek Su-ji.

A. I agree. It was my first drama where I didn’t have to deliberate on what kind of tone I would adopt for my lines. I just had to work on the emotions. It was also different from playing somewhat predictable roles like the femme fatale or the obedient, traditional woman. I never knew that not having to be pretty would give me so much freedom.

How did you interpret the character?

At first, I felt pity. Because she spent many years in her house, avoiding social contact, some of her alumni even thought she might have died. But she loses more than 50 kilograms (110 pounds) and ventures out to the world again. I felt compassionate, how she worked hard to fit it and be happy, and also rooted for her.

Many were impressed by your eating scenes.

When I had eating scenes, I didn’t eat all day. Not necessarily because I was afraid I would be overweight if I did, but because I wouldn’t be able to really dig in and enjoy the food. I thought only when I eat when I’m really starved, that I would eat with relish.

Didn’t you find the scenes where you had to burp or show your armpit hair difficult?

Not really, actually. I just thought when viewers get to see scenes like that, they would feel closer to Su-ji. So I wasn’t hesitant at all. I just hope the viewers found them funny and not annoying.

What prompted you to make a leap from being a girl group member to an actress?

I was a member of Milk and we performed for about a year. But the group suddenly disbanded [partly because a member had conflicts with the agency]. It was 13 years ago. I was surprised and unsure about what to do. I got into musicals, my acting coach and I clicked well and I studied acting for four years after that.

Weren’t there times when you wanted to quit?

It took 10 years for the public to learn my name as an actress. I learned dancing since I was four, and I was in the showbiz industry from a young age. Getting a job [outside showbiz] didn’t seem like my journey. That’s why I stayed in showbiz and endured ups and downs all these years. It got me to where I am today.

You were only in short films. Do you ever want to be in feature films?

I am very curious about how my acting would be different on the big screen. I’m also curious about what it would be like to act all my heart out, immersed in just one piece [film] for a long time. I’m currently reading “Night Train to Lisbon” [by Pascal Mercier]. I would love to be in a film one day that examines human nature like that book.