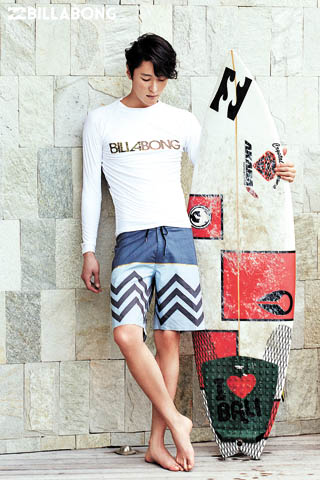 For men, it’s best to style a rash guard top with board shorts. Provided by Billabong

The blistering temperatures this summer continue to send sweltering people to the country’s beaches, streams and swimming pools.

But this summer’s hottest swimsuit fashion trend isn’t a new type of bikini - rather, it’s the so-called rash guard.

Unlike previous years when many young women were spotted boldly showing off their figures in bikinis or monokinis, revealing one-piece swimsuits that were all the rage last summer, women and men of all ages are instead more focused on covering up this year.

Rash guards, which are a type of spandex water wear that covers the entire upper body, are not a new invention. In places like the Gold Coast in Australia, surfers have been wearing rash guards for many years. 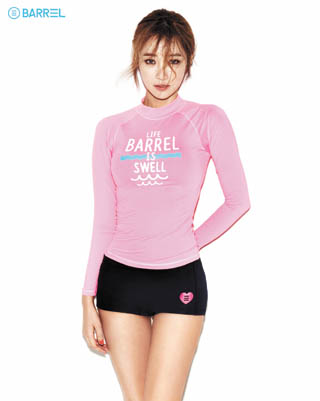 For women, a rash guard top can be worn with a bikini bottom. Provided by Barrel

Due to their multiple functions, including protecting wearers from chafing while surfing as well as from sunburn due to overexposure to the sun, rash guards are often worn by those who enjoy water sports.

But this summer, rash guards have become a popular swimsuit for the general public, even though most are just dipping their feet in the pool.

“Rash guards allow you to hide parts of the body you don’t want to expose,” said Lee Young-ah, a fashion stylist. “Those who used to be quite hesitant wearing a bikini due to love handles, for example, tend to be very satisfied with rash guards.”

Although rash guards reveal less skin, Lee says, “it doesn’t mean that it is less sexy.”

“Rash guards are spandex, so they reveal the curves of your body line, presenting a very sexy image,” she added.

In an effort to reach consumers looking for a new swimsuit for their summer holidays by the water, swimsuit and sportswear brands from high-end fashion to mainstream have scrambled to launch this popular item this summer, in diverse designs and colors.

There is no right answer to wearing rash guards, say fashion stylists.

For a more fashionable look, Lee says it is better to mix and match.

Although many women choose black as it tends to make you look slimmer, fashion stylist Kim Yeon-ji recommends a bright color for at least the top or the bottom.

Kim also says it will look more stylish to mix a new rash guard with the bikini you have at home.

“Swimsuits are very easily affected by trends. Many women will have bikinis they only wore for one season in their drawers. This mix-and-match is another way to make use of your old swimsuits.”

Rash guards were first introduced to Korea three years ago, according to Quicksilver-Roxy Korea, a sportswear brand that has been leading the rash guard market in Korea. Back then, sporty designs in bright colors were the most popular.

Now, as they are gaining more popularity among men, women and even children, the brand said customers’ preferences are differentiating while the market is continuing to expand.

Local casual wear brand Head said late last month that it decided to increase its production of rash guards by 200 percent over last year upon witnessing a jump in popularity. Since May, it has been seeing a 15 percent increase in sales every week, going through its fifth reorder, according to the brand.

“Our latest rash guard from Head’s M3 line is highly functional, not only in blocking UV rays and preventing see-through, but it is also designed to correct body lines so that it can be worn as stylish beachwear as well,” said Yang Soo-young, a manager at Head’s sales and planning department.

Although rash guards have many charms, not only nixing UV rays but also extra flab, Lee says it’s better to avoid wearing rash guards if you are too skinny or too plump.

“Men and women who are too skinny or too large should try to avoid wearing rash guards as the tight swimsuit will look too loose or too tight,” she said.