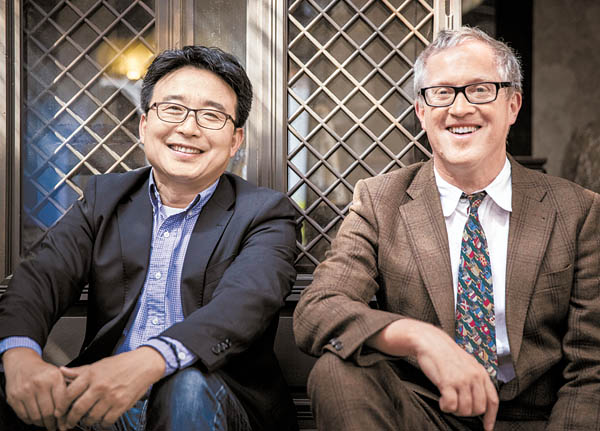 An installation piece by Korean artist Kang Ik-joong, 55, will float along the Thames River as the representative work for a festival in London next September.

Kang Ik-joong is an internationally recognized artist who is primarily active in New York. His installation work “Moon of Dream,” created in 2004, is a vinyl globe consisting of nearly 130,000 children’s drawings that measures 15 meters (49 feet) across and floats on water in Ilsan Lake Park in Goyang, Gyeonggi. “Moon of Dream 2016” will revisit the same concept and present a fresher version of the installation for the first time in 12 years.

Evans became interested in Kang’s piece at the beginning of this year and had been consulting with the artist, leading to their first in-person meeting Oct. 8. Evans expressed his admiration for Kang and praised him for “sharing understanding and philosophy about rivers similar to ours.”

Totally Thames takes place along the 68-kilometer (42-mile) stretch of the Thames River in London throughout the month of September. About 100 film, music and theater events happen in conjunction with this outdoor festival. It originally started in 1997 as “The Mayor’s Thames Festival,” but, along with the name change, it reinvented itself as a much larger, cultural event last year, attracting about 10 million visitors.

At last year’s festival, installation artist Florentijn Hofman, famous for his piece “Rubber Duck,” exhibited a giant floating hippo sculpture called “HippoThames.” Next year, Kang’s “Moon for Dream” will be displayed in the vicinity of the iconic Tower Bridge.

“Once we learned that Kang’s piece was created with the help of children, we came to believe that aspect of his work was in line with the participatory nature of the festival,” Evans said. “We look toward to the rebirth of ‘Moon and Dreams,’ paired with the beauty of the Thames River and the culturally eclectic scene of London.”

Kang, known for series such as “Moon Jar” and “Hangul,” has become an internationally acclaimed installation artist. In 2008, he installed a piece called “A Moon Over Gwanghawmun.” His new piece for the London festival is expected to be seen by about 2.7 million visitors.

“As a river flows, it becomes a medium for connections,” Kang said, “As such, I am envisioning how to present the remake, while keeping the connection of the work that originally started in Korea and will soon be displayed in London and received by much larger and global audience.”

He added, “Given the changes that occurred in the past 12 years, the new ‘Moon of Dream’ will be more high-tech than its predecessor.”

At the Diamond Jubilee of Queen Elizabeth in 2012, commemorating the 60th anniversary of her ascension to the throne, Evans led the parade of 650 boats on the Thames River as part of the celebratory festival. For this endeavor, he received the Royal Victorian Order.

Evans also has developed a strong interest in cross-cultural exchange between renowned urban riversides. He has already arranged exchanges in Seoul and will visit Jeonju, North Jeolla, for the same purpose before the end of the year.