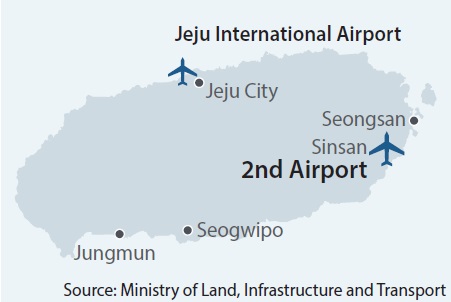 As visitors to Jeju Island continue to grow, particularly from China, the government decided to build a second airport on the east coast of Korea’s most popular tourist destination by 2025.

The announcement was generally welcomed by people in Jeju, though some residents of locations near the new airport’s site expressed concerns.

The Ministry of Land, Infrastructure and Transport announced its plan on Tuesday to build a second Jeju airport in Sinsan-ri, Seogwipo, due to rapidly growing demand.

The ministry said the need to expand airport facilities on the island has become urgent due to rapidly growing demand, including hordes of Chinese tourists traveling to Jeju and a recent boom of low-budget carriers that need more landing strips.

According to the ministry, the number of passengers using Jeju International Airport has surged nearly 70 percent from 11.3 million in 2005 to 19.3 million as of September 2015.

“When we did a study in 2010, we didn’t expect the number of people using the airport to grow explosively as it has today,” said Suh Hoon-taik, director general of aviation policy at the ministry.

The ministry said it looked into three options: expanding Jeju International Airport, shutting it down and constructing a new airport, or building a second, complementary airport. The government decided the third option, which would cost less. Expanding the existing airport would have cost 9.4 trillion won ($8.1 billion), including landfill on the north coast, while the second option to reconstruct it would cost 7.1 trillion won. To build a second, complementary airport will only cost 4.1 trillion won. Additionally, the first two options would face resistance from Jeju residents, who would oppose closing the existing airport because it would hurt the island’s economy. Environmentalists would object to the landfill’s effect on the marine ecology of the island.

The ministry said it looked into 30 possible locations and took into account five major determining factors - airspace, weather, environment, noise pollution and obstacles. The government said it particularly emphasized protection of the unique natural environment of Jeju. In three stages of evaluation, the ministry narrowed down the possible sites to four. It chose Sinsan-ri on the east coast largely because its airspace did not overlap with the existing airport’s, while the damage caused by construction will be less harmful to the local environment than in other sites. The population of the area is also less dense, reducing the number of people who will be affected by noise pollution.

Additionally, Sinsan-ri is only 80 kilometers (50 miles) away from the existing airport, which would take only an hour by car or bus.

The second airport will be built on a 4.95 million square-meter lot. This is larger than the 3.30 million square-meter lot on which the existing airport is constructed. The new airstrip will be 3.2 kilometers long and 60 meters wide. While the length of the airstrip is the same as the existing airport’s, the width will be higher by 15 meters. The new airport is expected to accommodate 25 million travelers annually.

“The construction of the second airport will be the biggest project on the island,” the island’s governor, Won Hee-ryong, said in a statement, “and will be a turning point for the island’s future.”