[Korea and the fourth industrial revolution <9-2 Education>] In the education technology business, success is elusive

[Korea and the fourth industrial revolution <9-2 Education>] In the education technology business, success is elusive 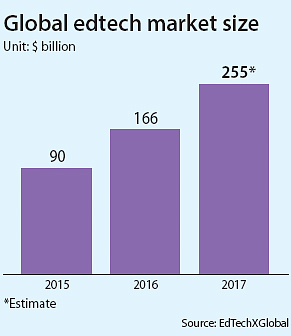 Rapid advances in information technology are changing the way the world operates, and education is no exception.

The global education industry has scrambled in the past several years to combine traditional pedagogy with the latest technologies to transform learning models that have barely changed for over a century. “Edtech,” a portmanteau of education and technology, has risen as one major pillar of the education industry, a $5 trillion market. Edtech promises student-centered and student-driven education as laptop and tablet access grows and classrooms become more connected. The global edtech market is projected to grow 17 percent annually to reach $252 billion by 2020, according to EdTechXGlobal, which runs an annual educational technology-focused conference.

Korea has only recently recognized the prospects of edtech. Local start-ups can be roughly classified into companies dealing with methods and subjects of learning; management of students’ self-discipline and problem solving; and parent-teacher communication. A majority of them are running mobile apps. Some traditional education companies are moving into new technologies by tying them into their existing methods, but most attempts have turned out to be no more than marketing hype.

No official data is available on the number of edtech companies and market size in Korea, though sources working in the industry say fluctuation is more severe than in other sectors. Only companies that have “innovative” technologies manage to find international success.

Riiid was able to stand out with its artificial intelligence algorithm that can run practice tests for the Toeic. The company has patented its AI formula for multiple-choice tests in Korea, the United States, Japan and China and is set to expand its platform to the Chinese College English Test, taken by 20 million Chinese students every year, and other popular English proficiency exams.

“Too few edtech start-ups manage to get along on the back of services and technologies with a competitive edge,” said Jang Young-jun, CEO of Riiid. “Too many of them jump into edtech with vague and naive ideas.”

Another successful Korean start-up, Knowre, has developed a set of mobile games to help students learn math and can be accessed through the company’s cloud system.

The five-year-old company has exported its kit to around 70 middle and high schools in the United States and signed supply deals with other education companies.

Global internet giants are rushing to get involved and capitalize on edtech. Silicon Valley and tech moguls are trying to change the way children learn by building alternative schools, rolling out their own programs and investing in new types of educational institutions.