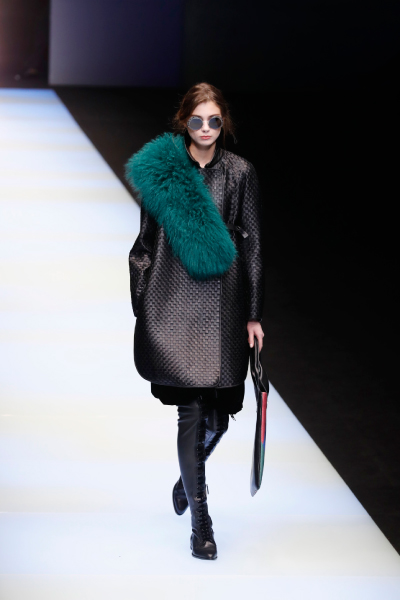 A model wears a creation as part of the Armani women’s Fall/Winter 2018-2019 collection in Milan on Saturday. [AP/YONHAP]

MILAN - Fashion and politics clashed Saturday in Milan’s main squares and runways, as protesters rallied ahead of Italy’s divisive national election and designers at Milan Fashion Week showed off their own visions of what the future should look like.

Right-wing leader Matteo Salvini of the anti-migrant League held a major rally in front of the city’s Duomo cathedral at the same time that Milan Fashion Week shows were taking place in an adjacent palazzo. Students protesting a neo-fascist party scuffled with police.

Here are some highlights from Milan Fashion Week womenswear previews for next fall and winter.

Giorgio Armani countered the increasingly violent tones surfacing in his native Italy’s election campaign by producing an ethnically inspired collection - and in rejecting fashion shows that use shock tactics to get attention.

Asked after the show for his suggestions on translating the inclusion seen in his collection to politics and other arenas, the 83-year-old fashion designer said he was calling himself out on the strategy of using emotion to incite strong reactions.

“I would not overdo it with easy emotions at all costs, creating a spectacle,” he said.

He transitioned immediately to a comment on fashion houses that he thinks employ shocking images to attract attention. The reference to Gucci was clear.

“One can do whatever he wants. But if I put on the runway a head under the arm, severed, we have reached the limit,” Armani said, days after Alessandro Michele’s “Cyborg” collection for Gucci featured two models carrying replicas of their own heads under their arms.

Armani’s collection for the next cold weather season took inspiration from many cultures “as an ode to coexistence as opposed to exclusion.” The designer said “sophisticated simplicity” was the unifying element.

Draped looks and soft jackets defined the silhouette. Ponchos were belted, skirts were knotted at the knee and trousers were loose and comfortable.

The color palette heated up from the new neutral, pink, with gray to warmer tones of purple, blue and flamingo red, which Armani swirled together for a dreamy, iridescent effect. Evening wear featured colorful beaded and fringe jackets with velvet trousers. 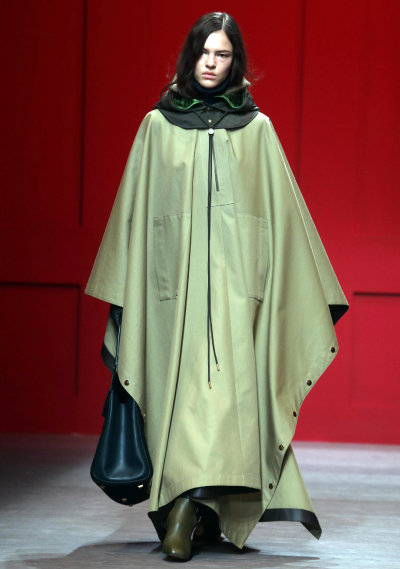 A model wears a creation as part of the Salavatore Ferragamo women’s Fall/Winter 2018-2019 collection in Milan on Saturday. [AP/YONHAP]

“I was looking at the show ‘The Crown,’ and the idea of Princess Margaret, who is this sort of naughty aristocratic person, who has been out all night long, she is still wearing her velvet gown and it is 7 a.m. and she realizes, ‘Oh, no, I need to go out and feed the pigs,’” he said.

And just for that highly specialized occasion, Andrew has created a leather poncho, a flat pair of Ostrich boots with the signature Ferragamo buckle and a big soft calf bag.

In homage to Ferragamo’s inception as a shoe brand, Andrew said he approached the collection “from toe to head.”

The footwear included heels galvanized with metallic glazing for the fashion house by automakers as Andrew seeks to win the attention of younger consumers with new technology while hewing to the brand’s trademarks.

Soft ponchos, knit tops that complement Napa leather trousers and shirt-dresses in foulard prints pulled from the archives formed other key elements of the collection. The brand’s trademark double buckles - or ganci - appeared as belts and accents on footwear, peek-a-boo detailing on high boots or as a sort of stirrups on heels. The cool color palate included pewter blue, parakeet green, merlot reds and mustard yellows.

“I really wanted to make sure in this collection and going forward we really embrace color and make it a major feature of the house,” Andrew said.

Missoni models splashed through an industrial space, dragging scarves and jackets through puddles. The message was not clear but there was a suggestion of a disregard for the material world.

The looks Saturday had a Bohemian-Rasta-Grateful Dead vibe, sans patchouli and incense, but with a mostly Earth-tones color palette. The designs were long, flowing and layered easy-to-wear pieces.

A mini-skirt was unfinished for a long, rough-hewn fringe effect. A big blanket-y coat appeared to have no arms, completely enveloping the wearer. Beneath the silhouette was tighter, made of a finer knit.

Necklaces looked like amulets and gemstones and big-brimmed hats finished the looks. AP