Bringing Korean tradition to high fashion: Seo Young-hee has made her mark by combining art and style

Bringing Korean tradition to high fashion: Seo Young-hee has made her mark by combining art and style 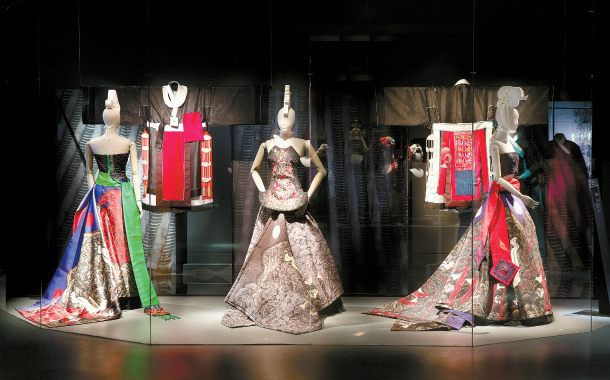 A scene from the exhibition “Korea Now,” which was put together to celebrate the 130th anniversary of the diplomatic relationship between Korea and France in 2015. Creative director Seo Young-hee curated the exhibition. [SEO YOUNG-HEE]

The name Seo Young-hee is almost never missed whenever there is a big name local or international fashion event. Sometimes an exhibition curator, and other times a stylist, this creative director has worked to combine modern and traditional Korean culture in her works for special exhibitions to celebrate the 130 years of diplomatic relations between Korea and France at Musee des Arts Decoratifs in Paris, or Van Cleef and Arpels’ photos, and the Korean version of “La Traviata” produced by the Korea National Opera.

Whenever the reason for choosing Seo is asked, industry experts answer one thing; There is no one else in Korea’s fashion industry who can do what she does. What she does goes beyond mixing fashion, art and tradition.

Now, Seo is working with Louis Vuitton to make “Hahm,” a traditional Korean style carrier that contains jewelry and other gifts given by one family to another when two families are to become related through marriage. (The word can also be spelled ham in English.) The French fashion house, which has done many different made-to-order special projects, decided to take motifs from hahm and invited Seo to pitch in her ideas.

The hahm has touches of traditional Korean culture here and there. It doesn’t seem much different from a standard Louis Vuitton suitcase, but the size is different. Considering that the hahm is supposed to be carried on the back instead of being held by hand, the height is about 40 centimeters (15.7 inches). Inside the hahm, there are embroideries of oriental Pheonix and moran, or a peony. The inside has trays of jewelry and gifts and in the center is a letter, which the newly married couple can keep forever. The highlight is hidden in the very bottom - a wooden pair of wild geese, which represents a happily married life.

While Seo may now seem like the guardian of tradition, the journey to get there didn’t just happen overnight. She studied clothing in college and previously worked as a fashion designer for a big name company. In 1991, she stepped into a new role as a stylist as she was coming back to work after taking care of her children. She didn’t have any experience as a stylist, but she was confident that she could do it after seeing photos in a fashion magazine. She thought that she could do better than what she saw, and so she started to knock on doors.

Since then, Korea has seen the introduction of more fashion magazines including Elle, Marie Claire, Harper’s Baazar and more, which gave her a bigger stage to work on. She became an in-house stylist for Vogue Korea in 2001. She was very clear about her style: doing photo shoots that were equally high fashion and artistic. She put jewelry around the neck of ogolgye, a chicken known to have black bones, and put luxury handbags on top of piles of briquettes.

When she got more serious about making fashion styling into a work of art, hanbok, a type of traditional Korean clothing, started to appear in her works. When the words “modern hanbok” were unfamiliar to many in the mid-2000s, she featured creatively designed versions of the Korean traditional dress in her shoots. She put jokduri, a traditional hair accessory often worn by women, on people who had dyed their hair different colors, and had models wear dangui, an outer jacket that usually is closed with ties in front, as a jacket that’s supposed to be kept open. These seemingly small, but innovative, stylings provided her with so many opportunities to direct exhibitions later on, not only about hanbok, but also traditional craftworks.

Seo recently sat for an interview to discuss her career and her collaboration with Louis Vuitton. The following are edited excerpts. 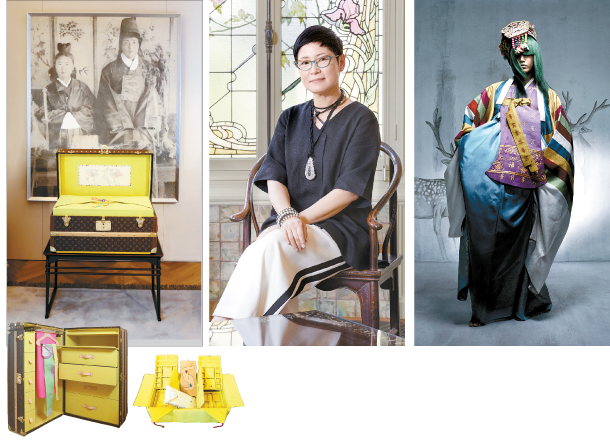 Left, and above left: French fashion house Louis Vuitton made a suitcase that takes motifs from Korea’s hahm, a bag that contains jewelry, gifts and a letter from one family to another when they become related through marriage. The inside of the hahm has smaller boxes that carry jewelry. Middle: Creative director Seo Young-hee has worked hard to combine fashion, art and tradition. Right: A hanbok that Seo styled, worn by a model with green hair. [LOUIS VUITTON, VOGUE KOREA]

Q. Did you know a lot about hahm before starting this project?

A. No. But as always, one answer I have is that I have to study. One of the spaces I love is the library inside the National Museum of Korea. There, I started to learn more about hahm. Based on the information I learned there, I talked with Louis Vuitton to set the size of the trunk and then made the form it has now. Once it is opened, it has a cloth cover. We also made leather pads with five different colors.

Are you satisfied with the result?

I learned a lot during the 10 months I worked with the brand, even to the level where I think I should pay them instead of receiving money from them. But at the same time, I have mixed feelings. Louis Vuitton started with a simple trunk, and we have a similar legacy with hahm, but failed to [develop] it. Each time we do work about tradition, I always think a lot about why certain things started to disappear from everyday life, and I look back on what [more I could have done.]

How have you been able to do so much with art when you didn’t study it in school?

While working as a stylist, I always thought the world of fashion was too narrow, and was also thirsty for more as it is limited because fashion items have to be something that can be worn. So, for aesthetics, I turned to contemporary art. I saw fashion’s ubiquitous character in contemporary art as well. Even 20 years ago, when I went to London and New York Fashion Weeks, I always lengthened my stays by about two days to visit galleries to get myself more inspired with things I never got to experience from doing fashion work.

I did not know anything in the beginning. Then as I looked around, I started to see more pieces that were filled with language that I didn’t understand. I’m a bit of a nerdy type and I’m very diligent in doing what I am given. Because I didn’t know too much about art history, I bought a history book from the Tate Modern and then crossed out the names of artists whose works I had seen. That’s how I started to study on my own.

What did you do to make your look books stand out from the others?

I first tried to take the photos as if I was doing a still life painting. When I have a shooting schedule set, I hurried to buy things at Gyeongdong Market. When many others didn’t get I was doing, editor-in-chief Lee Myung-hee at Vogue Korea was different. When I suggest my ideas and said I wanted to do things that way, Lee told me the ideas were fun. Then I put a coal briquette next to all kinds of luxury products. If Lee then had said no, I would still be just dressing models, taking photos and that would be it. I am still so thankful to her.

How did you come to think more about making art books?

Back when designers were really scary to me, designer Jin Teok asked me to visit her and I was really nervous on my way there. Jin wanted to make an artbook and was debating whether to choose a Japanese stylist or myself, and she said she chose to do work with me. Then we did photo shoots for over a year. I went to museums to study, checked all the graphs and texts and learned the artists out there. That was when I learned that there is a fantastic world other than fashion. I still send cards to her - not on Teacher’s Day, but on Parents’ Day. Since then I got more serious about aesthetics where fashion and art overlap.

Why did you decide to include hanbok in fashion look books?

When I was younger, mothers came to school wearing hanbok and they did their housework in it as well. I have that hanbok gene in me. Then when I was really focused on working in the fashion industry from the late 1990s and early 2000s, a lot of imported fashion brands started to come in. I started to question whether the new phenomenon was okay, whether Korea was being colonized [by foreign fashion trends] and whether I should do something about it. I shot my first look book, which has a feel of traditional Korean style, at the Hwanghak-dong market in 2002. I put a dress that had an image of an oriental phoenix on top of the piles of black beans.

Were you condemned by anyone for doing so?

I was worried because the styling was quite unprecedented and unconventional. But even master hanbok designer Lee Young-hee said she wanted to photograph her hanbok in a similar way. A younger stylist who works on period dramas once said that they grew up with the look books made by me. When I heard that, I not only felt honored, but felt responsible. As I continue to style hanbok, I have gotten to know many people who do traditional craftworks and I even did a national tour to make hanbok and Korean tradition come together as a whole thing.

There are so many experts in art and heritage. Is it burdensome to enter their fields?

Of course. I feel a lot of burden especially when I do exhibitions as they are the works that the public sees for a long time, and I worry whether people will think I did not do a very good job. It was particularly difficult to do the work at Musee des Arts Decoratifs in Paris as there was a limited budget and only a few works [to display]. Every night I tortured myself thinking whether to have a particular piece in a particular part of the exhibition. I could only sleep after chugging some beer.

Is there any principle you have that never changes?

If I do things, it has to be like me. It was to be my styling and my exhibition. In fact, everyone has their own color. If you want to expose that color, you need to let go of the prejudice you have against yourself.

Is there anything you want to do that you have not done yet?

When I did the exhibition on the 100 years of movie fashion history two years ago, I started to think that it was something I wanted to study more. So I’m doing movie history now. Movies and fashion are very closely related. Didn’t Givenchy become famous in the United States thanks to the movie “Breakfast at Tiffany’s”? When the local movie industry grew in the 1960s, many designer boutiques also became more famous. I want to show the young designers now that we also have a fashion history.