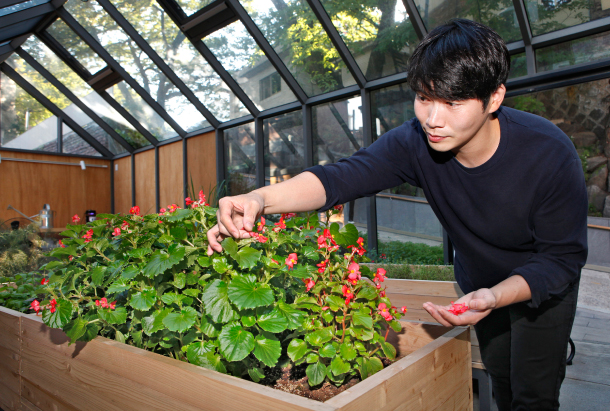 Zero Complex, which sits on the slopes of Mount Namsan, is making its mark among full-course French restaurants in Seoul with its unique approach.

It has a greenhouse just a 30-second walk from its kitchen, where executive chef Lee Choong-hu and his staff can get fresh cut herbs and flowers to use with their dishes. It was the first restaurant to offer pairing with natural wines (wines made with minimal use of chemicals and human intervention) years before these wines became more popular earlier this year.

Lee is the youngest chef to earn a star in the Michelin Guide Seoul. Zero Complex also has a foreign sommelier who speaks Korean, English and French. It is also the first Michelin starred-restaurant to move its restaurant to a completely different neighborhood across the Han River, from Seocho District in southern Seoul to Jung District in central Seoul earlier this year. The restaurant sits inside the same building as hot new art gallery Piknic.

Lee, who used to study and work in Paris, got to use a variety of herbs and plants he had never seen before in Korea. While working for Le Chateaubriand and its sister restaurant Le Dauphin, he learned more about farmers in France who grow specifically for chefs who need rare ingredients. 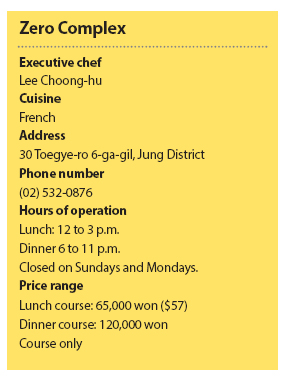 After he came back to Korea to open the restaurant in 2013 after spending six years in France, he got to know one farmer in Korea who grew herbs that were not widely available here. To prove how passionate he is about using rare herbs, he has visited the farm in Yeoju, Gyeonggi, once a week for about four years. Whenever he visits, he helps out with any work that needs to be done on the farm.

“As much as chefs’ [talent] to combine different ingredients on a dish is important, the works of such farmers is essential. What makes a good dish starts from using quality ingredients, obviously,” said Lee. He added that the flourishing business of such farmers who experiment with growing rare ingredients has a direct impact on making the dining scene more diverse and full.

Lee’s dishes are highlighted with small flower petals or green leaves, which further accentuate the overtones of his dishes, which are often simple. He wants to make pumpkins taste like pumpkins and carrots taste like carrots, so he doesn’t use any strong condiments that could overwhelm the original taste of the ingredients.

The colors on his dishes are true to his use of ingredients, which leads to a simple presentation that uses one or two colors. His use of tiny flowers and herbs, which are often sprinkled over the plates, is noticeable. With his recent move from Seorae Village in Seocho District to central Seoul, he decided to set up a greenhouse right next to the restaurant. The farmer he works with comes by once every week to check how the restaurant staff are growing herbs. 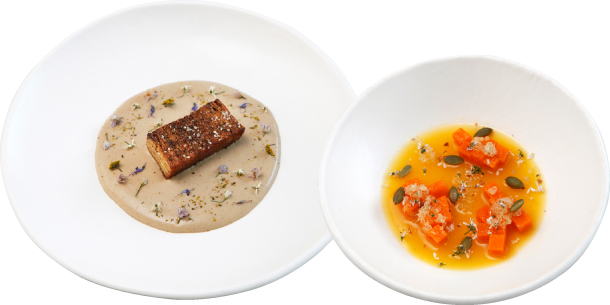 “Any flowers that are in bloom or even the herbs that are sprinkled naturally on the ground are my inspirations for food,” said Lee. He added that the pathway with the greenhouse, which leads visitors to the entrance of the building where the restaurant is located, is one of the crucial reasons why he chose to take on the challenge of moving to a new location despite having a successful restaurant in southern Seoul.

“Almost everybody told me that I was taking on a risky challenge trying to make a restaurant on the northern side of Seoul,” said Lee. “After I remembered that I thought a lot about the way that leads me to the door of a restaurant, I wanted the walk to the restaurant to be a more memorable one.”

The restaurant also attracted devoted fans who followed it across the river because of its offering of natural wines. These wines, produced with minimal chemicals or human meddling, have become popular among both wine connoisseurs and formerly-non-wine drinkers starting early this year. Zero Complex’s move to become the first restaurant in Korea pairing food with natural wines has earned them a loyal following and made them a must-visit place among natural wine fans.

Lee first experienced a variety of natural wines while he was working in Paris. He sold some natural wines when he opened the restaurant, and the list grew longer after he met French sommelier Clement Thomassin in Korea. Thomassin used to run a wine bar in France and now his passion lies in promoting natural wines to locals here in Korea. He already had extensive experience with wines in the Korean market. The French sommelier has helped the restaurant earn its reputation as one of the best places to drink a wide variety of natural wines and learn more about the international trend.

“What leads the restaurant to go strong for a long time is bringing out the talents hidden in the staff working with me. After all, what’s left in the end is what the staff can provide and contribute to the restaurant,” said Lee.