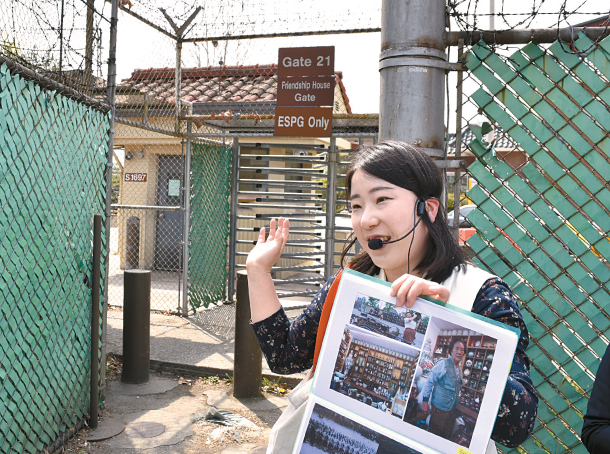 Tour guide Lee Sun-kyung stops at Yongsan Garrison’s Gate 21 during a walking tour around the base. [KIM EUN-JIN]

Last November, the public got a brief and partial look at the Yongsan Garrison for the first time in 114 years.

Located in the heart of Seoul and covering a 2.43-million-square-meter (2.9-million-square-yard) area, the garrison was Korea’s own Forbidden City, blocked off to its own citizens and home base to powers stronger than Korea. 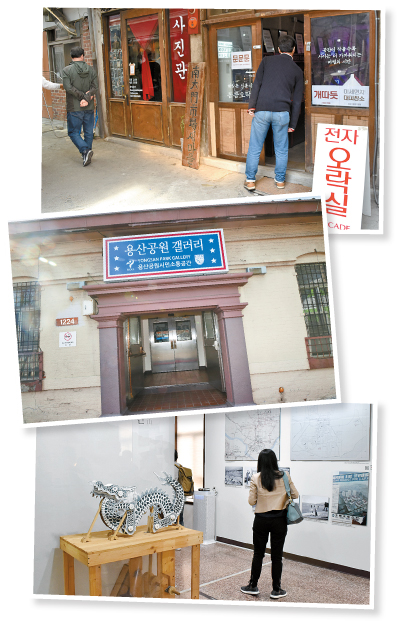 Top: Onlookers peek inside shops at Sinheung Market. Middle: The external view of the Yongsan Park Gallery, which was previously a United Service Organizations building. Below: The gallery documents the history of the area. [KIM EUN-JIN, YONHAP]

The Japanese military first began stationing troops there during the Russo-Japanese War in 1904, and later made the area the headquarters of the Imperial Japanese Army. After Japan surrendered at the end of World War II in 1945, the U.S. Army took it over. Last June, the United States Forces Korea (USFK) headquarters was relocated to Pyeongtaek’s Camp Humphreys, 40 miles south of Seoul.

On Nov. 2 of last year, Seoul residents got an unprecedented opportunity to see select areas inside the garrison, which still contained active U.S. military facilities that had yet to be transferred. The government launched bus tours starting that day, with stops at historical spots like the former Japanese Garrison Prison and the highest point of Mount Dunji. Over 700 Koreans have taken the bus tours already.

The bus tours are for Korean citizens only and seats are limited. But there are other ways for curious locals and tourists to learn the history from outside the garrison, which will be transformed into a giant park in the coming years.

The Seoul City Government launched free guided walking tours last month that go around the walls of the garrison, making stops at areas whose history dates back to the Japanese colonial occupation (1910-1945). There are two routes that visitors can choose from: one starting at Noksapyeong Station and another at Yongsan Station. The treks are around two hours long and led by local volunteers.

The Yongsan route has a more urban focus, passing by landmarks like the 90-year-old Yongsan Railway Hospital and Yongsan Post Office, as well as “Yongnidan-gil,” with its lively restaurants and cafes.

The Noksapyeong route is better suited for history and nature lovers, especially those looking for some exercise. The route starts in forested paths by the barbed-wire walls of the garrison, where signs of “No Trespassing” are still in place. It continues onto the outdoor Sinheung Market and hillside neighborhood of Haebangchon - or “Liberation Village” - initially settled by displaced Koreans in 1945 and now home to many foreigners: and more restaurants and cafes.

“There is so much historical content in Yongsan, and we want to share the history and offer a better understanding about the culture through these tours,” said Lee Sun-kyung, a local guide and member of the Yongsan History Culture Social Cooperative. 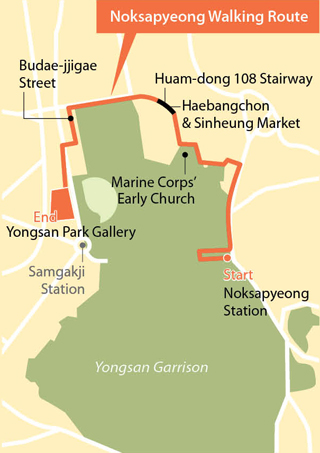 Both routes end at the Yongsan Park Gallery, a former United Service Organizations (USO) building and the first facility inside the garrison to allow access to Korean citizens. The gallery, opened Nov. 30, features maps, photographs and documents that record the footprint of the USFK in Seoul over the last 65 years.

The gallery is open from 10 a.m. to 4:30 p.m. on weekdays, and is set to extend its hours to weekends starting from May.

“There are known to be around 1,300 buildings inside the Yongsan Garrison, with only around 900 in use,” said Yongsan Park Gallery manager Kim Hong-ryeol, a Seoul government official under the city’s Urban Planning Division.

“It’s the responsibility of the Seoul government and the Ministry of Land, Infrastructure and Transport to launch a joint investigative team and brainstorm how to deal with the buildings. Seoul city will continue to make spaces of communication to collect citizens’ opinions […] and work closely with the central government to preserve the memories of the USFK and recover Korean history.”