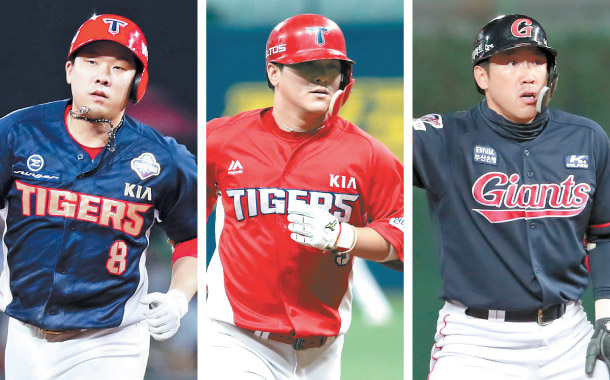 From left: An Chi-hong, Kim Sun-bin and Jeon Jun-woo are considered the bigger names in the free agent market this year, but they have not yet found a club to play for in the 2020 season. [YONHAP, JOONGANG PHOTO]

Despite the LG Twins’ signing of shortstop Oh Ji-hwan, the KBO’s 2019 free market has yet to see much action.

The Kia Tigers still have not signed either of their free agents - An Chi-hong or Kim Sun-bin - while the Lotte Giants also haven’t finalized their contract with outfielder Jeon Jun-woo.

“Oh Ji-hwan’s contract will affect [the contract of our players] because they play similar positions,” said the Tigers general manager Cho Kye-hyun. “We’ll speed up our negotiations.”

This year, there are 20 free agents in the KBO, and of those 20, only seven players have signed their contracts for the 2020 season. Oh’s contract is the most expensive among the seven but doesn’t compare to others when looking at the free agent market over the past few years.

Looking at the free agent market over the past three years, it was all about the records. In November 2016, Choi Hyoung-woo hit the 10-billion-won ($8.6-million) mark when he signed a four-year contract with the Tigers. Then, just few months later, Lee Dae-ho of the Giants set a new record by signing a four-year contract at 15 billion won.

However, this year, the trend has shifted. Rather than spending big, clubs are starting to look into a cheaper and more affordable option. As the free agents this year aren’t big-name stars like the previous years and are considered older, quite a number of clubs fulfilled their needs through the second round draft by signing veterans at cheaper prices.

Due to this, 13 players are still struggling to find their clubs for the 2020 season.

Originally, it was reported that the Twins estimated Oh’s contract to be about 7 billion won, which is higher than that of the Doosan Bears’ shortstop Kim Jae-ho, when he was a free agent back in 2017. Oh’s contract was estimated at that price as he had a higher wins above replacement number than any other shortstops in the KBO over the past 10 years. However, due to the market trend, the Twins lowered Oh’s contract price.

“Considering the current trend of the free agent market, we thought a four-year contract at 4 billion won was just right for Oh Ji-hwan,” said the Twins general manager Cha Myung-seok.

Other teams are expected to follow in the Twins’ footsteps, and it is unlikely An, Kim or Jeon will see any big contract offers. Of the three, An is the only player who can possibly sign a more expensive contract than Oh. Throughout his 10 seasons, An had a 0.300 batting average with 100 home runs and 586 RBIs. He also won the Golden Glove Award three times as a second baseman, in 2011, 2017 and 2018. Last year, he was also a part of the Korean national baseball team who won gold at the Asian Games.

Of the free agents this year, Jeon was considered the biggest name in the market, but surprisingly, there hasn’t been any news regarding his negotiation process. At age 33, Jeon earned his eligibility for the first time this year, and looking at his 2019 season, he’s been the best player in the struggling Giants’ batting lineup as he finished with a 0.301 batting average and 21 home runs throughout 141 games.

In addition to the three players, the Bears’ captain Oh Jae-won also hasn’t signed his contract. Oh struggled throughout the 2019 season but still fulfilled his role off the field as the club’s captain, and in the Korean Series, he played a crucial role at bat to help the Bears to win the title.

Despite the slow free agent signing, contracts are expected to be completed within a month, as the clubs have to register their players for the 2020 season by Jan. 31. Once that’s completed, the clubs will be leaving for spring training starting in February.