Comfort and joy for migrant workers

Comfort and joy for migrant workers 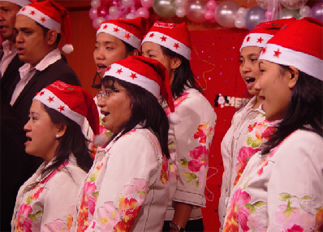 A choir of migrant workers sings during a Christmas Eve service at the Seoul Migrant Worker’s House in Guro District, southern Seoul, on Monday. By Moon Gwang-lip

Dissa Wijamuni, a 29-year-old Sri Lankan, came to Korea early this year with a “Korean dream” that he now fears may have to give it up.
A business owner-turned-migrant worker, Wijamuni soon realized working in a Korean factory couldn’t earn him as much money as he needs to send home to his family in Sri Lanka. On top of that, the job was tough and dangerous, and he was homesick.
But Wijamuni felt a little less lonely on Monday when he attended a Christmas Eve service along with other migrant workers at the Seoul Migrant Worker’s House in Guro District, southern Seoul.
“Spending time with these people helps me forget the loneliness and hardships I deal with in Korea,” said Wijamuni, as he was waiting to go onstage for a drama performance. “This is my first Christmas holiday at a church, and I am grateful to be here.”
On the fifth floor of the building, which many foreign workers in Seoul now call their home away from home, around 200 people, from Bangladesh, Indonesia, the Philippines and Sri Lanka, had a two-hour service that went past midnight. A short sermon was followed by a Christmas cantata, Bible dramas and a potluck dinner.
With smiles on their faces, most congregants appeared, at least for the moment, to be free from pains from work injuries and anxieties over unpaid salaries, problems that plague many migrant workers here.
“Problems are still out there,” said Lee Seon-hee, a female Protestant pastor who has helped migrant workers for more than a decade. “But here they take comfort by sharing their troubles with each other. Especially tonight, the message of the birth of baby Jesus, I believe, is enlivening hope for them, believers or unbelievers alike.”
The Seoul Migrant Worker’s House is one of the 14 migrant workers’ help centers Pastor Kim Hae-sung established across the country.
There are around 430,000 migrant workers in Korea and around 14,000 of them are turning to Kim’s organizations for legal aid, language support and medical treatment, according to Kim. The makeshift hospital on the second and third floors of the Seoul center treats more than 300 foreign workers, including dozens of in-patients, every day, Kim said.
These daily hospitalities come in second on Sunday to services which many migrant workers say are healing their pain.
Guruh Kristianto, 29, from Indonesia, got eye surgery at the hospital recently after he hurt his left eye working in a factory. He said he still cannot see with the left eye, but that does not bother him at services.
“I don’t know how I could feel this way, but I feel so secure and peaceful whenever I attend service here,” he said Monday.
Judith Hernandez, 36, an English teacher from the Philippines, said migrant workers also come to the service at the Seoul center because it welcomes everybody, with no regard for the color of their skin.
“Despite being categorized together as foreigners on the surface, migrant workers from developing countries like us are treated as second-class foreigners in Korea compared to white foreigners,” she said. “This church embraces everybody, regardless of skin color and language. There are not many places in Korea we are treated equally like here.”
That same night, Pastor Kim also preached to around 100 Chinese workers, a single majority group among migrant workers in Korea.
“In human history, it has always been the poor that work all day and all night,” Kim said during the sermon. “But remember that poor shepherds were the first to see the birth of the baby Jesus, not the haves. Your poverty is a blessing in disguise that enables you to meet Jesus, who has come for the lowest among us.”
“Amen,” the audience shouted back in response.