Hanjin Group Chairman Cho Yang-ho, fifth from right, mixes a giant bowl of bibimbap with Korean Air employees yesterday in front of Korean Air’s world headquarters building in Gonghang-dong, Seoul to mark the airline’s 40th anniversary. The company was founded on March 1, 1969. Provided by the company

As Korea Air Lines, Korea’s state-run airline had long been in debt, and when it was privatized as Korean Air the fledgling carrier had just around 2.7 billion won ($1.7 million) to start operations and scored last in profit out of all airlines in Asia. 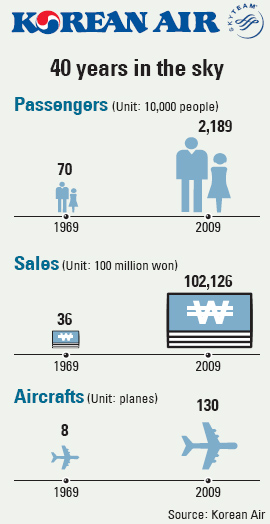 “Forty years ago, we lacked in every aspect. However, with our fierce determination to connect Korea to the rest of the world, we have become Korea’s leading airline company today,” said Cho Yang-ho, chairman of the Hanjin Group, which owns Korean Air, yesterday in its world headquarters building in Gonghang-dong, western Seoul.

Over the years, the company has grown to become Korea’s flagship carrier with 10 trillion won in sales last year.

Since its founding, the airline has flown over 5.87 billion kilometers - equal to circling the Earth 146,000 times or making 7,700 trips to the moon and back.

It currently operates 130 aircraft to 116 destinations in 39 countries around the globe.

The airline also plans to add 20 million passengers every year until 2019.

President Lee Myung-bak yesterday sent a congratulatory message to the company, saying, “In the midst of a very rough worldwide financial crisis, Korean Air’s efforts to overcome the situation have been exemplary.

“I hope Korean Air grows to be one of the top 10 carriers in the world in the future and helps the revival of the country’s economy.”