Actors run from an explosion during the filming of “Into the Gunfire,” a movie about South Korean student soldiers during the Korean War set to be released in June. Provided by EinsM&M


HAPCHEON COUNTY, South Gyeongsang - The rattle of machine guns cuts through the air as I arrive in what looks like a bombed-out city inside Hapcheon Image Theme Park. It seems frighteningly real, with hundreds of people dressed as soldiers from North and South Korea vying to control the tiny town - but in fact this is the filming location for the film “Into the Gunfire.”

The same site served as the location for the hits “Taegukgi” and “East of Eden.”

Four celebrities stand out of the fray: Cha Seung-won, dressed in a North Korean military uniform; Kim Seung-woo, who plays an officer from the South; and Kwon Sang-woo and T.O.P, a member of the Korean hip-hop group Big Bang, who were cast as student soldiers.

The film is set in August 1950, and their faces are made up to look sunburned. The movie is based on the true story of the battle between a North Korean Army unit and 71 South Korean student soldiers who defended Pohang while the South Korean Army gathered along the Nakdong River.

At a press conference held after the day’s shooting had ended, T.O.P recalled that when his involvement was announced his young fans weren’t even familiar with the Korean word for student soldier - hakdobyeong - many instead thinking it was the name of a disease.

That’s evidence of just how little young people know about the Korean War, Cha said. “I hope postwar generations like me remember the tragedy by watching this movie,” he added.

The film’s director John H. Lee said, “Since setting out to work, people have asked about the politics behind the movie many times. Because it’s a student soldier story, the North Korean soldiers play the role of villains, but as far as possible, I try to treat the South Koreans, students and North Korean soldiers in a balanced way.”

Into the Gunfire, which will be released in June, has a budget of 11.3 billion won ($10 million) including marketing expenses, the biggest of any domestic Korean War film since Taegukgi. Equipment such as tanks and guns were partly supplied by the Defense Ministry.

Not all Korean films made about the war are able to secure such government help. 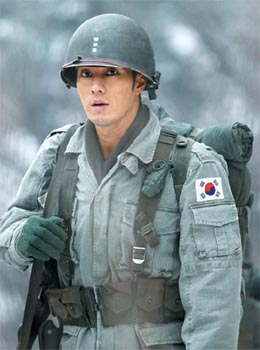 So Ji-seob plays a South Korean soldier in MBC’s drama “Road No. 1.” Provided by Logos Film

The producers of Taegukgi had to do without ministry support when officials demanded some scenes be changed. At the time one producer was rumored to have said the requested changes would have made Taegukgi into “The Leader of Baedal,” a propaganda film used for military recruiting in the 1970s.

Some in the industry believe the Defense Ministry has relaxed its standards since Taegukgi was released in 2004. Chung Tae-won, CEO of prominent production house EinsM&M, said, “Now the Defense Ministry knows nobody’s going to watch movies” if producers cater to their demands. On the other hand, “as making a war film costs a tremendous amount of money, getting financial help from anywhere would be very appreciated.”

Chung is also producing Into the Gunfire, which he describes as “not an anti-Communist movie, though it does deal with the true story of a fratricidal war, and marking the 60th anniversary of the Korean War, I want to show it to war veterans in the world who might visit Korea.”

To that end, a contract was signed earlier this year to distribute it in Germany, Chung said, and negotiations with a Japanese company are ongoing. EinsM&M is even considering a 3-D release overseas, though there is not enough time to convert the film to 3-D for its domestic debut.

Films about the so-called “Forgotten War” are a rarity in the United States. The most memorable are “MASH,” 1954’s “The Bridges at Toko-Ri” and the much-maligned “Inchon” (1981). In contrast, warehouses full of celluloid tales have been spun about World War II and Vietnam. But the anniversary has helped set in motion a new project called “17 Days of Winter,” produced by Hollywood startup Mad Media Entertainment. Like Into the Gunfire, 17 Days will also receive heavy logistical support from the Defense Ministry. Touted as the first war epic to be shot in 3-D, it will depict a battle between a group of U.S. Marines and the Chinese who surrounded them at the Battle of Chosin Reservoir (Changjin Lake) inside North Korea during the winter of 1950.

By e-mail, Mad Media told the JoongAng Ilbo that they selected the subject because it would show how the sacrifices of soldiers from across the world, including the U.S. Army, kept the Korean Peninsula free.

Not all the 60th anniversary projects aspire to uncontroversial neutrality or simply to honor the UN troops. The Korean-produced “A Little Pond” is a dramatization of the incident at No Gun Ri in which American soldiers of the 7th Cavalry Regiment killed a number of South Korean civilians. The event gained global notoriety when The Associated Press ran a series of articles concluding that a massacre had taken place based not on carelessness but U.S. military policy. The series won the Pulitzer Prize for investigative reporting in 2000.

The film has been in production for eight years, including four years of investigations and interviews with survivors, and writer and director Lee Sang-woo has emphasized his first priority is to retell the story as accurately as possible. Lee assembled an star-studded ensemble cast, including Moon Sung-geun, Moon So-ri and the late Park Kwang-jung.

A Little Pond has already provoked controversy among local expatriates, especially since one of the soldiers cited in the AP stories later confessed he was not at the fateful bridge when the killings took place.

“As a historian of the forgotten war I’m pleased when new cinematic or literary material comes out,” said Andrew Salmon, a journalist based in Seoul and author of “To the Last Round.” But, he continued, “I’m a little saddened that a film which concentrates on the most negative side of the UN intervention is coming out at a time when the nation will be somberly commemorating the 60th anniversary of the outbreak of this great tragedy.”

Though Salmon said there were “mistakes and even atrocities” committed, he had doubts about No Gun Ri. “I seriously question based on recent evidence whether this was a deliberate massacre rather than a tragic mistake.”

The TV dramas for the anniversary promise to be less controversial. MBC’s upcoming 16-episode “Road No. 1” is now in preproduction with a budget of 13 billion won and popular actors So Ji-seob, Kim Ha-neul and Yoon Kye-sang slated to star in the drama. KBS will broadcast the 20-episode “Comrades,” a remake of a popular drama from the 1970s. Choi Soo-jong will take on the role of the squad commander played by the late Na Si-chan in the original.

But this flowering of interest in a key time in Korean history may not be simply due to the anniversary. Some in the industry instead suggest that filmgoers are only now more open to the war as a subject after being turned off by anti-Communist state propaganda in the 1960s and ’70s. Those movies, critic Heo Moon-young said wryly, “didn’t have much commercial appeal.”