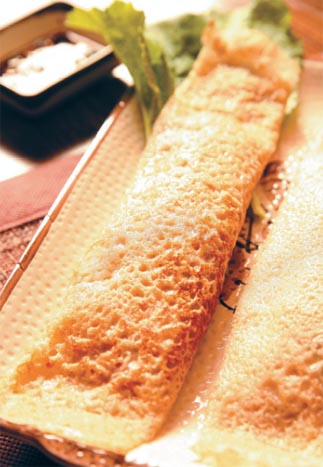 Pyeongchang, a small county in Gangwon, has established itself as the memil (buckwheat) capital of Korea. Its cold temperatures and numerous mountains provide the ideal conditions for the cultivation of buckwheat.

As the town’s hometown hero, Lee Hyo-seok, an early 20th century novelist, wrote in a short story titled, “When the Buckweat Flower Blossoms,” that the whole town turns into a stream of buckwheat flowers in the spring.

The abundance of the grain prompted residents to devise a number of innovative dishes using buckwheat. Preparing memil dishes for special occasions such as jesa, a Korean ancestor veneration ritual, was a must. But it was only after industrialization that Koreans started eating memil dishes for their taste and not because of the oversupply of the grain.

Before industrialization, many Koreans struggled to make ends meet. But thanks to the rapid growth of the Korean economy, people’s incomes improved and they started adding pork, cellophane noodles and kimchi to plain memil pancakes, giving birth to memil jeonbyeong, or stuffed buckwheat crepes.

This dish is formed like a wrap and stuffed with a variety of ingredients. To some, it looked like a gun, which gave it another name: memil chongtteok, with “chong” meaning “gun” in Korean.

Memil jeonbyeong was especially popular as a special dish for invited guests. That custom continues to the present day.

Visiting the town of Bongpyeong in Pyeongchang, the aroma of baking memil jeonbyeong fills the air, particularly in spring.

The town holds an annual buckwheat festival and tens of thousands of people from all over the country visit the region to experience the beautiful memil fields and the delectable flavor of the area’s memil dishes.

In addition to memil jeonbyeong, area restaurants serve a chilled soup with buckwheat noodles, known as memil guksu, which is perfect in the heat of summer. Also popular are memil pancakes and memil jelly, known as memilmuk.

These days, buckwheat is being touted not only for its taste but also for its nutritional properties and low calorie count. Times have certainly changed but memil is still as delicious as ever.