How are the world’s stock markets rated?

How are the world’s stock markets rated?

Top ranked students are placed into an honor class while average students and those below the average are each put into a regular and an easy course. Students are classified into different groups based on their test result. A country’s stock market works the same way. Stock markets from all around the world can be divided into different groups based on a result of an assessment made by an eminent stock index compiler.

The world’s renowned indices evaluating stock markets all around the globe were developed by the Financial Times Stock Exchange, a London-based major global stock index compiler, and Morgan Stanley Capital International, an index provider in the United States. Both the FTSE and MSCI indices classify countries around the globe into different categories based on a result of an evaluation. The best category for both indices is a group with developed countries. Then, what is so good about being placed in this group? The FTSE and MSCI indices are used by global investors who operate large-size funds such as overseas asset managers, institutional investors, hedge funds and pension funds when determining where to invest such huge sum of money. Therefore, these indices play a key role to benchmark the performance of the investment of funds estimated at $2.5 trillion and $3.5 trillion, respectively. In the case of the MSCI index, even merely 1 percent of fluctuations can shift $35 billion worth of money which may have a huge influence on not only certain stocks but also a country’s overall stock market. 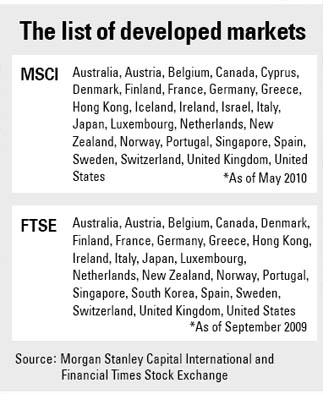 What is the MSCI?

The MSCI index has been calculated by Morgan Stanley Capital International, the affiliated company of Morgan Stanley, since 1969. Over 3,000 types of indices are being operated by MSCI based on region and sector. Among them, ACWI (All Country World Index) and Emerging Markets Index are the ones that Korea is closely correlated with. The MSCI ACWI consists of 45 country indices including 24 developed and 21 emerging market country indices while the MSCI Emerging Markets Index, designed to measure stock market performance of emerging markets, is comprised of 21 emerging market country indices such as Korea, Indonesia, China, Brazil, Colombia and Taiwan. Countries are classified into three different groups - developed, emerging and frontier.

Where does Korea stand in the MSCI?

Korea currently belongs to an emerging market group in the MSCI’s equity indices. MSCI reviewed for an upgrade of the Korean market in June but decided to remain its status the same. It was the second time that Korea failed to make it into the developed market category following June 2009.

Why did Korea fail to upgrade its status to ‘developed’ and would it negatively influence the local stock market at all?

MSCI cited a lack of an active offshore market for the Korean won and limited trading hours of the onshore spot currency market, meaning that investors had to pre-fund trades. Also the “rigidity” of an identification system designed for the local market investors and anti-competitive practices in provision of stock market data were also brought up as reasons behind for the rejection. MSCI has been demanding the Korea Exchange for the easing of regulations on the use of the Kospi 200 index to allow the creation of derivatives for foreign investors to trade when the Korean market is closed at night. Under existing regulations, derivatives can’t be listed in other overseas exchange markets without the Korea Exchange’s permission. These were the very same reasons why Korea was rejected for an upgrade for the first time back in June 2009. Over the course of a one-year period, MSCI and Korea Exchange have tried to fine-tune these issues but eventually weren’t able to reach a consensus.

Finance experts view the recent failure in a status upgrade by MSCI to have not much influence on the local stock market. “The Korean stock market has already been considered as a developed market by global investors since September last year when the country officially joined a developed market category in the FTSE index,” said an official with the Financial Services Commission. Also Credit Suisse, a global prime brokerage, even argued that Korea is better off staying where it is right now since the country represents more than 13 percent of the MSCI Emerging Market Index, saying that “it is better to be a big fish in a small pond, the third largest after China and Brazil, than to emerge into a much larger sea of developed economies, where its weighting would be very small.”

What is the FTSE?

Where does Korea standing in the FTSE?

Korea’s stock market was upgraded from an “advanced emerging” to a “developed” by FTSE last September. Upon joining the developed category in the FTSE index, Korea was able to stand shoulder to shoulder with advanced countries like the United States, United Kingdom, Norway, Netherlands, etc.

FTSE placed Korea into a developed market category but why not MSCI?

Experts explain what FTSE and MSCI value when evaluating a country’s stock market differs. According to Carl Delfeld, managing partner of iGlobalStrategist.com, FTSE focuses more on macro numbers like Gross Domestic Product, per capita GDP, market capitalization, whereas MSCI cited technical factors such as the Korean currency not being readily traded in some offshore markets as one of the reasons behind the rejection.

What benefits can Korea get by entering a developed group in these indices?

An entry to a developed market category in these indices provides a greater opportunity to attract more global investors for the Korean stock market. Let’s say one investor has $1 million investment funds. He wants to expand his funds but has no idea which country’s stock market would generate profits while safely securing his funds. Then he would go to these global equity indices to determine which country would be the best fit for his investment. Investors would have more credibility in countries classified as developed ones. In fact, Korea’s upgraded status as a developed market in the FTSE index raked in around $17 billion. In addition, a status upgrade to a developed group enhances stability in the stock market since short-term speculative investment funds flow into emerging markets whereas long-term and stable investment funds are drawn into advanced markets.