Q. Why are prices changing so much these days?

Q. Why are prices changing so much these days? 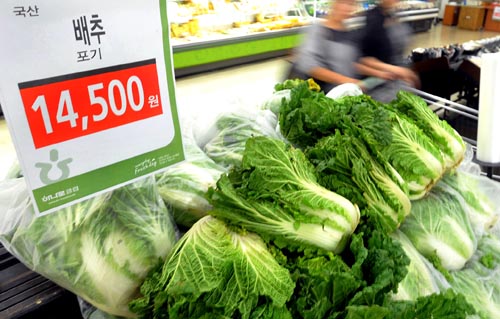 The price of cabbage has increased to 14,500 won (12.80 dollars) per head, which is so high that restaurants are refusing to give customers extra servings of kimchi. [JoongAng Ilbo]


If you’ve gone grocery shopping with your mother recently, you might have heard her grumble in the aisles about how expensive vegetables and fruits have become.

And because of the hike in prices, she might not be buying fresh goods like cabbage or spinach that she used to buy without hesitation.

If you’re a teen starting to wonder how outside forces affect your own household, you may be wondering what actually affects cost of living. One day a sack of potatoes might cost 3,000 won ($2.65) per kilogram, and the next day the price goes either up or down.

If the price of a certain good goes up, the value of money falls because it means you have to pay more for it - and vice versa should the price go down.

The recent hike in the price of fresh produce can be understood in such a context.

Recall this summer when the weather was extremely sultry. The average temperature went up to more than 30 degrees Celsius (86 degrees Fahrenheit). We also experienced heavy rainfall and typhoons Dianmu and Kompasu, which devastated not only households but also the farms that cultivate fresh produce and fruit.

Because of the abnormal weather, 15 percent of Korea’s farmlands that cultivate cabbage, the vegetable that’s gotten the most pricey, were destroyed, according to industry sources. Supply also decreased immensely in Gangwon Province, where a large amount of vegetables are grown.

Normally from August to October, the supply of cabbage is about 252,000 tons. But this year, due to abnormal weather and excessive rain, supply was only 151,000 tons, which is 40 percent less than the overall demand.

The vicious cycle of lack of supply is likely to continue as the demand for cabbage keeps growing in the remaining months of this year because this is when Korean families make kimchi for the winter.

The supply of cabbage is normally 1.4 million tons beginning in late October, but this year, supply will be decreased to 1.2 million tons.

The price of cabbage hit an all-time high of 13,800 won per kilogram (2.2 pounds). And spring onions also jumped to 6,000 won per kilogram this week, which is 50 percent more than it was just before the Chuseok holiday, when it was at 4,000 won.

“The price of spinach and lettuce might gradually stabilize as time goes by, but in the case of cabbage, prices will continue to rise,” said an official at the Ministry for Food, Agriculture, Forestry and Fisheries.

Increasing prices of farm goods is affecting the entire retail industry as well as you and your family.

Large discount stores that sell packaged kimchi are having a difficult time getting enough stock and kimchi-makers can’t get enough cabbage from farms. And at the end of the day, this affects your dinner table.

An increasing number of Korean families are avoiding expensive fresh produce and instead are purchasing more dried goods.

Restaurants are also refusing to serve a second helping of kimchi to their customers, which is a rarity in Korea, where the side dishes are never left empty.

To keep track of prices, the Bank of Korea regularly announces various price indexes that measure the average price level of goods purchased by households.

Early this month, when the Bank of Korea announced the producer price index, the price of vegetables rose 45.4 percent on-year in August and the price of fruit rose 35.4 percent over the same period.

The increase in vegetable prices was the highest since October 2007. Vegetables that are vulnerable to weather changes - like radishes, garlic, pumpkins and lettuce - rose the most.

On Thursday, the central bank predicted Korea’s consumer prices will increase more than 3 percent in the fourth quarter.

What is the government doing to stabilize the price fluctuations? After all, price hikes can lead to inflation, which steadily decreases the value of money.

So far, the government hasn’t been involved in creating policies to stabilize prices for agricultural goods like vegetables and fruit. Rice prices have been its main concern.

Nonetheless, when the price of fresh produce rose in the past, the government imported produce from China to stop the price from rising further.

But industry experts say there is a limit to that action because vegetables spoil quickly and demand is rapidly growing in China. So there might not be enough supply for Korea. After the recent price hikes, the government said it will increase supply in the country by importing 100 tons of cheaper-than-domestic Chinese cabbage and radish. The wholesale price of Korean cabbage is 3,000 won per kilogram while Chinese cabbage is 400 won per kilogram.

The government also said it will reduce tariffs for Chinese imported goods. Currently, the tax imposed on imported radishes is 30 percent and is 27 percent for cabbage.

But the government plans on gradually bringing this down to zero by the end of the year.

Private firms are also busy trying to come up with emergency measures to maintain supply. Lotte Mart, a large discount store, said it will import 50,000 cabbages from China next month.