A farmer smokes a cigarette after finishing the harvest of his Napa cabbage crop in Haenam, South Jeolla, on June 3. As prices of Napa cabbage plunge, more than half the crops in Korea are being thrown away as farmers plow over their crops or only harvest good specimens. By Cho Yong-cheol


Going to the market is becoming a kind of game of chance, as rapidly fluctuating grocery prices confuse homemakers and offer both opportunity and hazards to farmers.

Take the case of Napa cabbage, which consumers were buying for more than 10,000 won ($9.30) a head last September. Today, you get that cabbage for 1,000 won and farmers who expanded their Napa cabbage crops last year are suffering.

Or take eggs. They’re suddenly expensive at exactly the same time that raw chicken prices are falling. How can that be?

There is no easy solution to stabilizing prices, but analyzing eggs, chickens, cabbage and watermelons shows how and why prices fluctuate. And discount store chains are doing more and more on-the-ground research to get ahead of the roller coaster prices. 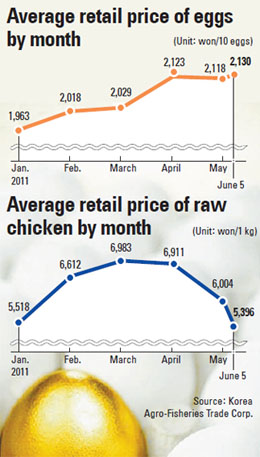 The cost of 10 eggs, which sold for 1,834 won last November, have climbed 16 percent in six months and 29 percent from a year ago to reach 2,135 won as of June 3, according to the Korea Agro-Fisheries Trade Corp.

And the price isn’t going down soon. According to the Korea Rural Economic Institute (KREI), the price of eggs is expected to increase from June to August between 19 and 49 percent from a year earlier.

The price hike is the result of a decrease in the number of egg-laying hens. Farmers had to cull them because of the avian influenza (AI) outbreak last year, and the number of laying hens decreased by 1.7 percent compared to last year. KREI predicts that egg production will decrease by 2.5 percent this year.

At the same time, demand has increased. The sky-high price of pork in the aftermath of foot-and-mouth disease (FMD) over the winter is driving some consumers to buy more eggs as an alternative. Other consumers are buying eggs instead of fish because of concern over radiation from Japan.

However, despite also being affected by AI, the price of raw chicken has stabilized. As of June 3, the price of one kilogram (2.2 pounds) of raw chicken was 5,220 won, below January’s 5,518 won and a peak of roughly 7,000 won in March. Analysts are saying farmers “need to voluntarily control their [chicken] supply in the face of impending overproduction.”

Why are eggs getting more expensive while raw chicken prices fall? The key lies in the period of growth. Chickens grown for consumption can be bagged and sold after just 30 days, allowing for a rapid turnaround in production. In fact, the number of chickens grown for consumption in June has increased by 8.3 percent on-year according to KREI, making a full recovery to pre-AI levels, and then some.

Meanwhile, it takes roughly 18 months to raise an egg-laying hen. Naturally, getting the hen population back to pre-AI levels is slow going.

Many agricultural products with mismatches in supply and demand in the past have had long periods of growth. Farmers who grow produce like Napa cabbages can respond once a year to changing demand when they plant the crop. Such products have a greater danger of reaching extremes in price, and call for closer monitoring.

Imports also played a role in the diametrical movements of egg and chicken prices. In June, the volume of imported raw chicken reached 12,662 tons - an on-year increase of 12.1 percent - as the government eliminated tariffs on 50,000 tons of imports in April and May when the price of chicken began to increase after FMD hit other meat supplies.

However, there are virtually no eggs imported to Korea because they easily break. In fact, 99.7 percent of eggs in Korea were domestic as of 2009, according to the Korea Poultry Association. Because eggs are a basic ingredient in cooking, when domestic supply dwindles, eggs do not have a viable alternative - imports or otherwise - that can fill the void.

“The effect of the high price of pork after FMD spread in a chain reaction to other food items,” said a representative of a top food company. “Higher raw material costs are serving as pressure to increase product prices.”

Hong Cheon-pyo, a farmer who has 11,281 square meters (2.8 acres) of watermelons planted in Nonsan, South Chungcheong, has a spring in his step when he goes out to tend his fields. The asking price for watermelons has exceeded 15,000 won per head, steadily climbing from a month ago.

The situation is a far cry from just four months ago, when Hong’s neighboring farmers said he was making a mistake by not planting Napa cabbages. Between January and February, the price of winter Napa cabbage had reached 4,800 won - despite it being off-season for cabbage. Expecting prices to skyrocket, Hong’s neighbors planted Napa cabbages, a bet that proved wrong as a head of Napa cabbage now costs 900 won at Nonghyup Hanaromart.

Hong avoided that mistake when he was signed on to plant watermelons on a contract by a representative of E-Mart, the nation’s largest discount store chain. Four months ago E-Mart locked down some 1.65 million square meters of fields around Nonsan and Daegu for the contract cultivation of some 1 million watermelons.

E-Mart predicted the supply of watermelons this summer would decrease by 20 to 30 percent from an average summer. Lee Ho-jeong, E-Mart’s buyer in charge of watermelons, postulated this from decreasing sales of watermelon seeds.

In February, Lee visited seven large-scale seed markets around the nation and discovered that farmers were buying 30 percent fewer watermelon seeds than in previous years. Checking E-Mart’s regional suppliers, Lee confirmed that many farmers had switched from watermelons to Napa cabbages. Predicting that there will be a watermelon crunch, Lee hurried to lock down farmers on contract for watermelons.

Watermelons are a key summer product for discount stores. Among some 70,000 items sold at E-Mart, watermelons are the single biggest seller in June, and total revenue is affected if stocks run low.

E-Mart utilized its previously cultivated network of regional suppliers, such as Nonsan’s own Agro-Fisheries Trade Corp., to sign up farmers like Hong without having to search for them individually.

Although E-Mart sourced watermelons through contract farming last year, it had failed in quality control. Customers said E-Mart’s watermelons were as “bland as water” and demands for refunds flooded the chain’s customer complaint lines. To address this problem this summer, E-Mart is implementing a two-tier sugar content test, before harvest and at the packing stage, and the watermelon must exceed 11 brix, a unit of sugar content.

E-Mart has 11 buyers specializing in sourcing fruit. Each buyer is in charge of about three different fruits that do not overlap in season. A big part of their job is predicting the size of the harvest.

“Watermelon prices will be more expensive than last year this June, but E-Mart will be able to source them at 30 percent less than the going price,” said Lee. “It’s because we focused on setting up a response system through the belief that if it can be managed, it’s not a crisis.”

Such a management system is needed in a wider scale, as fruit prices are expected to skyrocket during this year’s Chuseok holidays, which falls more than a fortnight earlier than usual, on Sept. 12. “Most of the 30,000 boxes of pears I shipped last year had been for the Chuseok season, but I fear that I might not even be able to ship half the amount by this year’s Chuseok” said Choi Jong-gi, a 64-year-old pear farmer who owns a 66,000-square-meter pear orchard in Naju, South Jeolla. “I’ve been trying to hurry the ripening by heating my greenhouses, and have already spent some 100 million won on heating bills.”

To combat a fruit crunch that is expected to raise prices by 15 to 20 percent over last year’s record-breaking prices, Lotte Mart, the third-largest discount store in Korea, has expanded their sourcing farms beyond key fruit growing regions such as Mungyeong and Andong in North Gyeongsang and Chungju in North Chungcheong, to regions that can meet earlier delivery dates such as Jangsu and Muju in North Jeolla and Geochang in South Gyeongsang. Lotte Mart has also increased its volume of fruit imports.

“Basically, bad spring weather has pushed back the flowering period, and we expect less than half the fruits as in previous years,” said Shin Kyung-hwan, Lotte Mart’s buyer in charge of fruit. A further concern is fruit prices nose-diving immediately after Chuseok, as demand contracts while fruit that has just ripened hits the market.