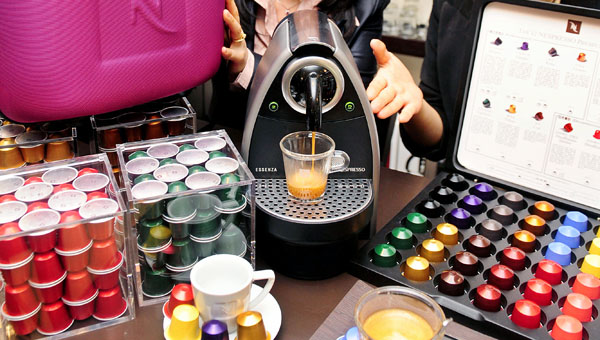 Capsule coffee machines and related products at a Nepresso store. The home-brewing segment has grown popular recently in Korea. Provided by the company


Demand for capsule coffee, or coffee from airtight capsules brewed in a dedicated machine, is rapidly growing in Korea where coffee used to come in instant form or brewed at specialty coffee houses.

After Nespresso introduced capsule coffee machines to Korea in 2007, other players have crowded in, including both Dongsuh, a local company known for instant coffee mixes, and the cafe chain Coffee Bean & Tea Leaf.

“Korea’s capsule coffee market is growing fast, between 20 and 30 percent every year,” said a spokesman with Nespresso Korea. “Korea is now the second largest capsule coffee market in the Asia region after Japan. Even executives at Nespresso’s headquarters are surprised because we’ve been doing business in Japan for over 20 years, but we’ve been in Korea for only five.”

Capsule coffee was first developed in 1986 by a Nestle researcher who wanted to bring the quality of espresso in Italian coffee bars to homes and offices. Capsule coffee now accounts for eight percent of the world’s coffee market, according to the industry.

According to Nielson Korea, instant coffee is still the top-selling product in Korea’s coffee market, which was worth 1.4 trillion won ($1.22 billion) last year.

The industry estimates the value of the capsule coffee market to reach around 130 billion won this year as work places start buying the machines to offer their employees better quality coffee in a range of flavors.

Capsule machines use high pressure infusions of water to make espresso and cappuccino as good as that at a professional coffee bar. Some, like the CBTL model, also brew teas. The capsules are more expensive than instant coffee or home-brewed coffee.

In March, it released a Tassimo capsule coffee machine targeting the home market.

“We have decades of know-how in coffee and we know Koreans’ taste in coffee,” said Ha Chi-soo, a marketing official at Dongsuh Food. “We will expand our presence in the market by continuously releasing products that meet customers’ needs.”

When first released, capsule coffee makers targeted offices but they have shifted their focus to homes by rolling out machines under 200,000 won.

The machine makers are doing well too, industry sources said.

JURA, a Swiss automatic coffee machine maker, said it saw a 20 percent growth in sales in Korea every year for the past five years.

According to data released by the Korea Food and Drug Administration (KFDA), a total of 123,029 tons of coffee was imported here last year, meaning Koreans consumed around 300 tons of coffee beans a day. It said the economically active population of 24 million is consuming 1.5 cups of coffee a day.