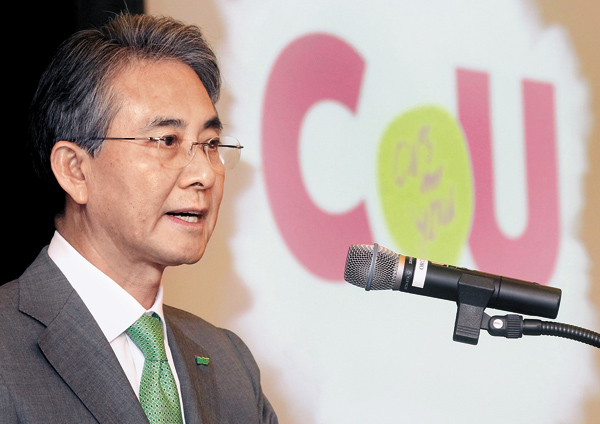 BGF Retail Chairman Hong Seok-jo announced that Family Mart will be renamed CU at a press conference on Monday. Provided by the company 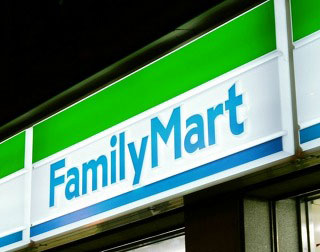 The move is aimed at expanding the franchise's business globally under an independent brand, he said.

BGF Retail is a joint venture between Japan's Family Mart and Korea's Bo Gwang Group. It also changed its name from Bo Gwang Family Mart at a general shareholders meeting on June 7.

"The name CU, an abbreviation of 'Convenience for You,' represents the transformation into an independent convenience store rather than just an imitation of Japanese models," said Hong in his first official press meeting since taking office in March 2007.
BGF Retail will invest "all of its resources" in setting up a clear brand identity as the competition between retailers intensifies, said the 59-year-old. More than 7,200 Family Marts have sprung up in Korea since the first one was established here in 1992.

"The new name and in-shop displays that say 'with Family Mart' [to try and maintain customer loyalty] will be applied to all shops nationwide from August to October," said Ahn Nang-kyun, an employee at BGF Retail.

At the moment, Family Mart stores in Korea pay royalties to the Japanese retail brand under their licensing agreement.

It is unclear whether these will continue to be paid in the wake of the rebranding. BGF Retail merely said it will maintain "cooperative relations" with the Japanese franchise to contribute to mutual growth.

The joint venture said it will begin tailoring its Korean stores more to Korea's burgeoning ranks of one-person households by expanding the variety of food products and scaling back other commodities. As most of the existing stores are fairly small, averaging 66 square meters (710.4 square feet), new emphasis will be placed on squeezing more out of the available space, it said.

BGF Retail said it will retain ownership rights to the brand name Family Mart in Korea to prevent copycats from piggybacking on its success.

BGF Retail established its goal of operating 8,000 CU stores and more by the end of this year with the net profit of 10 trillion won ($ 8.66 billion).