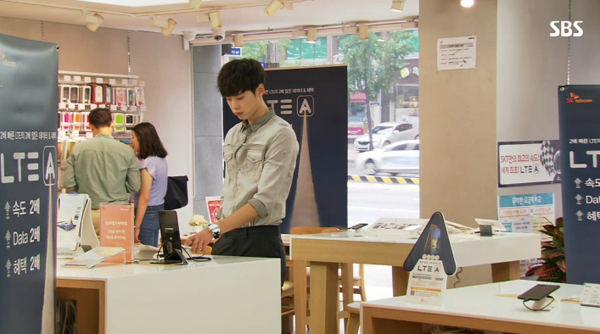 The drama series “I Hear Your Voice,” which ended earlier this month, came under fire for promoting a mobile service provider’s LTE service. [Screen capture]

A supporting actress walks into her house and abruptly yells at her parents who are talking in the living room. She says, “How many times do I have to tell you to turn on the air cleaner [referring to a function of an air-conditioner]? The yellow storm is serious.”

With her lines, the camera zooms in on the logo of the off-white air-conditioner, then pans down to show the latest air-conditioner. For that moment, the air-conditioner literally steals the spotlight in the run-of-the-mill soap opera that ended earlier this month.

The scene from the drama series “Your Lady” is a good example of rampant and irrelevant product placement in TV programs on national networks.

Almost all drama series and TV shows these days begin with a subtitle that reads, “This show may contain some product placement.” Some drama fans and critics, however, say the subtitle should be, “This commercial may contain some dramas.”

In the new drama series “Good Doctor” 3-D TV is used as an important prop. The protagonist, Park Shi-on, who is suffering from savant syndrome, is fascinated by 3-D TV, which motivates him to become a good doctor so that he can buy the most up-to-date TV for children in an orphanage.

One of the reasons the regulations were eased was to promote Korean products through K-pop and K-dramas, which were becoming increasingly popular overseas.

Declining viewership also played a role, as the nation’s advertising market received a boost after the rules were relaxed.

Upon its introduction, product placement indeed functioned as a relief pitcher for broadcasters.

In 2009, the total advertisement sales of KBS, MBC and SBS were 1.9 trillion won ($1.7 billion), but those sales soared to 2.3 trillion won in 2011 with the advent of product placement, said Lee Su-beom, a professor of mass communication at Incheon National University.

Broadcasters are aiming to cover between 10 and 20 percent of production costs from product placement marketing.

The most-watched 12 drama series last month saturated their shows with about 10 products in a 60-minute episode on average.

After deals between broadcasters and advertisers, viewers were left surrounded by TV shows and drama series jumbled with commercials.

In a recent drama series “I Hear Your Voice,” which ended earlier this month with a viewership rating of more than 20 percent, countless products were placed, from washing detergent to sneakers to chocolate to the LTE service of one mobile service provider.

Now, publishers are signing deals to get their books in front of the cameras in order to turn them into best-sellers. Industry insiders estimate that it costs 100 million won to show a book up to three times in a single drama episode. 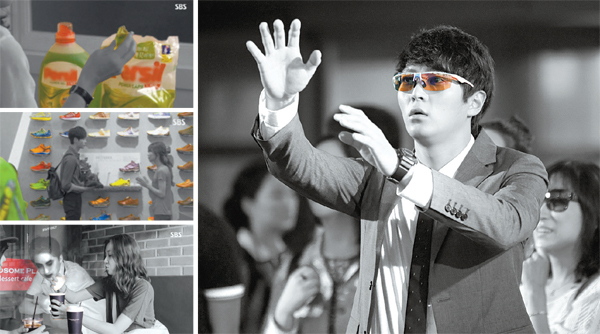 Top and middle are from the recently-ended drama “I Hear Your Voice.” Bottom left is from the drama “The Master’s Sun.” The drama promotes a coffee franchise’s brand in a witty way by featuring a ghost who is addicted to coffee. Right: In the new drama, “Good Doctor,” a 3-D TV is used as an important prop. The show’s protagonist is motivated by a 3-D TV to become a good doctor so he can buy the most up-to-date TV for children in an orphanage. [JoongAng Ilbo]

Viewers getting turned off

Lim Mi-ah, who had watched every single episode of the recently ended drama series “I Hear Your Voice,” once considered quitting watching the drama because she felt the series became like a lengthy commercial toward the end of its run.

“I like everything about the drama, from the characters to their meaty performance to the mixture of various genres, but frequent product placement really irritated me,” said the 33-year-old self-proclaimed drama queen, who lives in Bundang, Gyeonggi.

As the fantasy drama, in which the lead male character reads the mind of others, earned higher viewership in the latter half of the drama series, the number of product placements sharply soared.

In a couple of episodes, the lead characters praised the excellence of a mobile service provider’s LTE service.

Later, another example occurred when a supporting actor dropped by a chocolate store. The salesperson says, “It tastes good when it is cold. I’ll wrap it with ice.”

The Korea Communications Standards Commission issued a disciplinary warning to the drama series earlier this month for the chocolate product placement.

“Under the product placement law, displaying brand logos and products are permissible, but actors are not allowed to mention about certain products or suggest the use of the products to another character in the drama or TV show,” said Kwak Jae-seong, the vice team head of terrestrial networks department at the KCSC.

Adding chaos to the mix is that there are two organizations in charge of monitoring product placement.

“We only monitor contents of product placement. For example, we keep an eye on actors - whether they mention about certain brands or do an act of promoting certain products in the drama series or shows,” added Kwak.

The Central Radio Management Office monitors the specific size of the product placement on the screen or the duration of exposure time.

Under the current law, the total exposure time of product placement should not exceed 5 percent of the show’s total airtime and the product should be depicted smaller than one-fourth the size of the screen.

Professor Lee at Incheon National University wrote in his column that, “With two organizations, it is hard to expect them to be working efficiently over the same issue.”

The column was published in the May edition of “Newspaper and Broadcasting.”

Along with product placement, which is enforced by broadcasters, there is another type of marketing called sponsorship that is done by independent production companies.

By law, the two are technically different but they are actually the same on the set.

With sponsorship, drama series or TV shows can’t display corporate logos, but products can be used as props. At the end of the episode, the company or brand name is displayed in a banner at the bottom of the screen.

Before product placement was introduced to the broadcasting scene in 2010, sponsorship was widely used as one way to cover production costs but now the two are regularly used by broadcasters and production companies, causing further chaos for viewers.

“Since functions of the two are quite similar, there is more chaos on the set,” said Yun Tae-jin, a professor of communications at Yonsei University.

And its market is growing bigger and bigger. The product placement market was 3 billion won in 2010 but it is expected to reach 35 billion won this year.

An increasing number of reality TV shows that are themed around travel also played a decisive role in expanding the market.

Entertainment show guests from children to men in their 60s and 70s are busy taking photos with their smartphones and finding their way to the next destination by using navigation functions.

“Grandpa Over Flowers,” a popular reality show on tVN, even used the signature ringtone of a certain smartphone as background music for one episode.

“Such product placement is understandable in reality shows but when real products are featured in fictional stories, the overall quality of drama is downgraded,” said culture critic Kim Ju-ok.

Another industry expert, Kim Ji-yeon, a producer at an independent production company, said, “What we need is placing products in natural ways as much as possible.”

Some drama writers try to weave natural stories with products that are placed in stories.

Most recently, Hong Jung-eun and Mi-ran, who paired up as a writing team for “The Master’s Sun,” revealed a coffee chain’s brand in a witty way.

The drama series centers upon a woman named Tae Gong-sil who sees ghosts drops by a coffee shop in which her sister works as a manager.

Because Tae orders two cups of black coffee for herself, her sister worries and asks, “You haven’t slept well last night because of ghosts.”

And Tae answers, “No, this kid [referring to a teenage ghost who sits next to her but who is invisible to her sister] says he needs some caffeine.”

“Since functions of product placement and sponsorship overlap, the urgent thing we have to do first is revise the related law to minimize chaos on the set,” said Yun, professor of communications at Yonsei University.