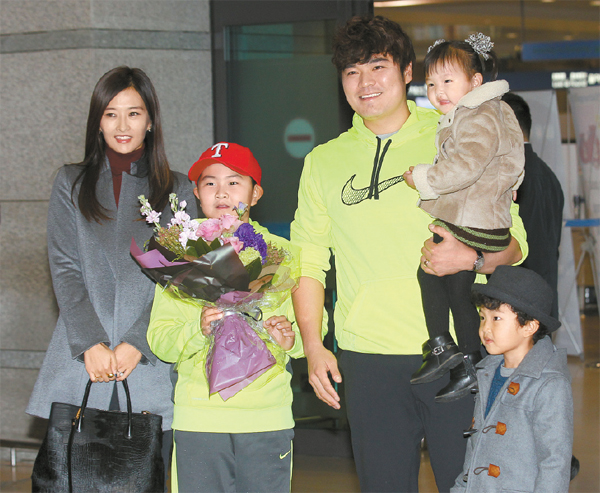 Choo Shin-soo of the Texas Rangers and his family arrive at Incheon International Airport yesterday. [NEWS1]

INCHEON - Outfielder Choo Shin-soo said he wants to play on a team that truly appreciates his value as a player, a winning team that can win a World Series title and a team based in a region where his family can settle while staying out of crowded cities. He said the Texas Rangers was the only team that satisfied all those conditions. Choo, 31, returned to Korea with his family yesterday and revealed details about his megadeal with the Rangers to Korean media outlets.

Choo said his goal is to win the World Series next season, and he hopes to face Ryu Hyun-jin of the Los Angeles Dodgers in that quest. He also said he is quite excited about having big-name stars such as Prince Fielder and Adrian Beltre as his teammates. Earlier this month, the Korean baseball star signed a seven-year, $130 million contract with the Rangers and passed a physical exam last week, finalizing the long-term deal. The Rangers officially introduced Choo on Friday, with the team’s general manager, Jon Daniels, and manager, Ron Washington, in attendance, along with Choo’s agent, Scott Boras.

When Choo appeared at an arrival gate of Incheon International Airport yesterday morning with his wife, Ha Won-mi, 31, his two sons, Mu-bin and Keon-woo, and his daughter, So-hee, he was surrounded by more than 100 reporters and photographers. Hundreds of fans also welcomed the star, who has signed the sixth-largest contract for an outfielder in Major League Baseball history. Choo then hugged his father, Choo So-min, and mother, Park Yu-jeong, before moving to Lotte Hotel in Sogong-dong, central Seoul, for a press conference. Choo said he will be staying in Korea for the next few weeks to participate in a series of charity events and will return to the United States around Jan. 12 to prepare for next season.

“Considering my age, it could be my last time being a free agent, so I wanted to make the right decision,” Choo said. “I wanted to be on a winning team but also on a team that is placed where my family can live comfortably. Considering such things, the Rangers were the perfect fit for me.”

Choo said he will not aim to win any personal titles in batting categories. He said he will try to play more than 150 games next season, just like this past season, because that durability gave him the chance of becoming one of the league’s best leadoff hitters. When the Rangers introduced Choo in Arlington, Texas, manager Washington indicated that he will make Choo the team’s leadoff hitter and put him as the team’s left fielder.

“I think I did a fine job in there [leadoff] and the reason he [Washington] wants to put me on the top of the order is because I can get on base well,” Choo said. “I don’t care where the manager puts me in the lineup, but I know what I should give to the Rangers’ lineup and what I am capable of. Fans in Korea and in Arlington may expect to see the Choo of the 2013 season or a better one in the next season.”

When reporters asked about U.S. media outlets’ reports of Choo rejecting a $140 million offer from the New York Yankees, he said: “Neither I nor my agent [Boras] rejected the offer that the Yankees have made because the Yankees just signed a deal with Carlos Beltran a day after they made an offer. It isn’t true that I or Boras demanded so-called Jacoby Ellsbury money [$153 million]. And there was a team that offered a bigger deal than the Yankees.”

However, he said that didn’t influence his decision to sign with the Rangers.

“My wife told me that she was touched when Daniels gave Rangers jerseys with my last name on them to my kids. That showed us how much the Rangers want me. I will try my best to win the World Series and will beat Ryu if I see him in that stage.”