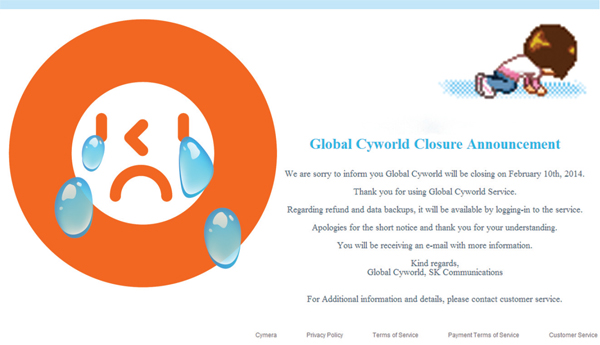 Cyworld, once Korea’s largest social networking service, decided to end its global service on Feb. 10 after failing to compete against global SNS sites such as Facebook, Twitter and Instagram.

Collapsing after less than three years, Cyworld plans to maintain its Korean service, but it is currently reviewing an employee buyout plan and is parting from SK Communications, which acquired it 2003.

According to the IT industry, SK Communications has already notified Cyworld users that it will terminate the service and has posted a notice on its home page.

Cyworld went international in November 2011 with the hope of benefiting from the Hallyu, or Korean Wave, of cultural exports. It provided lots of content regarding Korean music groups and actors and interviews with celebrities as part of its marketing strategy. It offered its services in seven languages.

The number of its subscribers peaked at 35 million.

But premature expansion outside of Korea, a slowness to move onto mobile platforms like smartphones and tablets, and a security breach in which the personal information of its 35 million users were hacked helped bring Cyworld down.

“Almost everyone in the country once used Cyworld, and some people still have more than one Cyworld account,” said a spokesperson for SK Communications.

“Even though they moved to Facebook and Twitter, people still have their photos and journals left on their Cyworld accounts and we have a tremendous amount of data to proceed and maintain. Thus, the cost of running the service and still maintaining their data is quite burdensome.” No Internet service enjoyed such heady success in the domestic SNS market as Cyworld.

When Cyworld’s “minihompi,” equivalent to Facebook’s Timeline, first appeared in 2001, established by the EBIZ Club run by students of the Kaist Graduate School of Technology Management, it attracted enormous popularity.

Virtual money called “dotori” allowed users to purchase music to put on their minihompi and buy decorative items, too. They posted photos, videos, journals and interacted with friends. Koreans used Cyworld both at home and abroad to get in touch with people.

Even political figures such as President Park Geun-hye, as a lawmaker during the 2004-5 period, communicated with people through Cyworld.

But with the spread of smart phones, the popularity of Cyworld went downhill.

After a cyberattack got the personal information of its users, more than 7 million people closed their accounts.

Cyworld was in the red for eight consecutive quarters until the third quarter of last year, and SK Communications has already cut the number of Cyworld employees by half, reducing the 64 teams at the company’s headquarters to 19.

“As its failure and weakness mainly resulted from its slow adaptation to the mobile era, quick decision-making is the key to its restructuring,” the company spokesman explained.

SK Communications plans to concentrate on its portal Nate and messenger Nate On.

It will also try to make Cymera, a camera and photo editing app, a new growth driver and establish foreign subsidiaries in the United States

Cymera has been posting a high number of downloads from Southeast Asia, the United States, South America and Europe.