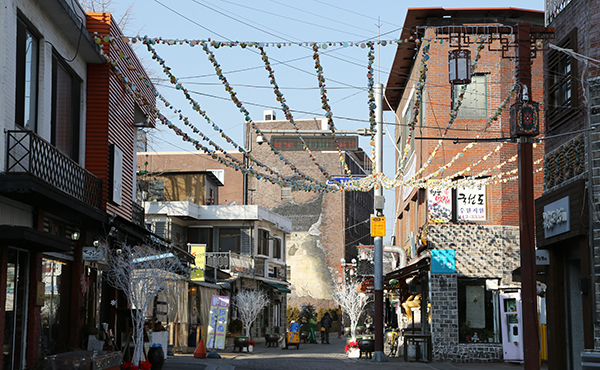 A dreary abandoned street near Haeng Palace in Hwaseong, Suwon, has become a haven of arts and crafts workshops in recent years. Provided by the Suwon Cultural Foundation

On a recent Sunday afternoon, inside an experience workshop, also known as gongbang in Korean, a mother and a teenage girl named Yeo In-hye were glancing at a miniature tteokbokki cart. 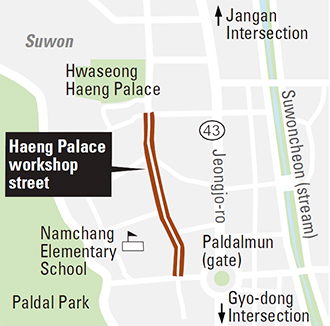 They spent about 30 minutes making the miniature, which even featured tiny boiled eggs and green onions on top of spicy-looking tteokbokki, the name for a Korean red pepper rice cake dish. Each plate on the cart was about the same size as a 100 won coin and the rice cakes were thinner than earphone cords. It cost them 7,000 won ($6.50) to learn how to make this miniature decoration out of clay from Yang Hye-min, 40, who owns the workshop Susuhan in Hwaseong, Suwon.

“My daughter loves making miniatures, so I asked around and found this workshop,” said Eom Geum-ok, 50, the mother. “It was fun making the miniature, but we were also immersed in looking at other miniatures on display, like a tiny little bag that’s only about 3 millimeters in diameter or a tiny cart that goes on top of your palm.”

Another workshop called Namu Ajeossi, which translates into “tree man,” attracts passers-by with the “tak, tak, tak” sound of a chisel striking wood. 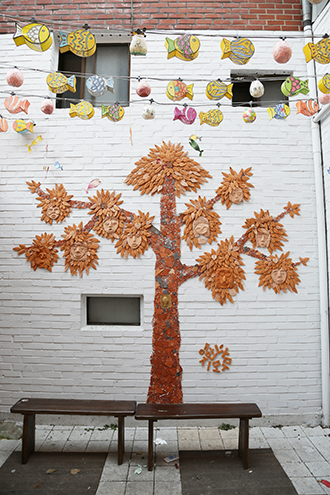 A wall decoration on one of the buildings was made using broken pieces of clay.

Park Young-hwan, 52, the owner, was engraving Chinese characters onto a wooden board. Park said he’s engraving 100 letters of bok, which means “fortune,” onto the board with different calligraphic styles.

“This piece will wish for fortune to enter our lives,” said Park. The bystanders watching Park said they couldn’t “believe all the ‘bok’ written on there.”

“Women in their 50s and 60s who look for wooden boards with carvings of four-character idioms or famous sayings or phrases are major customers at the workshop,” said Park.

The street connecting Suwon Hwaseong’s Paldalmun Gate and Haeng Palace used to be dreary, with many shuttered shops. But in recent years, the street got back its vitality as workshops of all kinds started popping up.

Amateur artists opened their workshops on the street, letting visitors have hands-on experiences with arts and crafts. Although the artists here are dubbed “amateurs,” many of them are serious about what they do; some have abandoned their jobs and found new careers in what used to be their hobby. 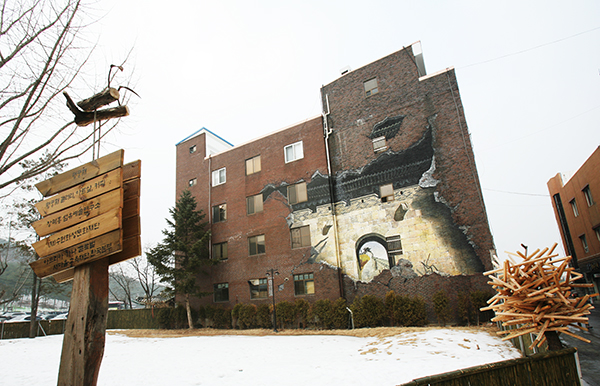 An old building on this cultural street in Hwaseong has become colorful thanks to some trick art painted on the wall.


In the 1970s and 1980s, the area around Paldalmun Gate was Suwon’s main street. It was like today’s Myeongdong in Seoul, the place where people gather in swarms.

But in the ’90s, it began to lose its vigor due to the establishment of a new commercial area in Yeongtong. About 200 shops that used to fill the street began closing their doors. By 2010, only about 50 shops were still open and much of the area was neglected.

In 2011, things began to change. Amateur artists began opening up their workshops on the street because the rent was cheap and there was a quiet atmosphere that allowed them to concentrate on their work. With the artists came the customers. 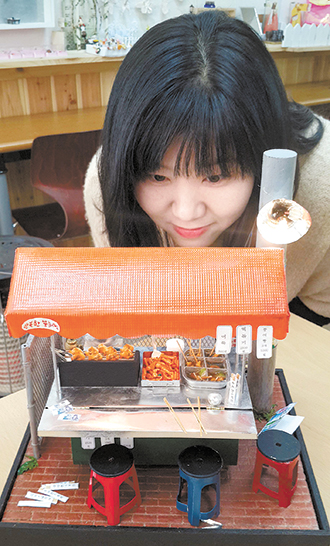 Yang Hye-min, owner of the Susuhan workshop in Hwaseong, Gyeonggi, stares at her miniature cart bar. The street connecting Haeng Palace and Paldalmun Gate is filled with about 30 workshops as unique as Yang’s.

When the number of workshops began to increase, the Suwon city government and the Suwon Cultural Foundation took notice. They decided to “turn the slums into a street of culture and arts.” A narrow asphalt walkway was replaced by widened paved blocks, adding quaint beauty to the area. The gray walls were decorated with colorful paintings.

Around 2012, the residents began to roll up their sleeves as well. Using donations, they installed streetlights. The streetlights, which have LED lamps that use less power, are also considered artwork because they were mounted on dead trees.

Today, workshops ranging from leather, hanji (handmade traditional paper) to cloisonne and many more, have opened up on the street. Visitors can have a go at making their own or buy ready-made artworks.

From time to time, residents and artists organize small festivals to promote the street and attract people from other neighborhoods. Now, about 30 to 50 people visit each workshop a day.

Jeong Seon-hwa, 40, the artist at a leather workshop Sweet Art said, “When I opened up the workshop here in 2011, the street was called the ‘dead zone.’ But now, liveliness fills it up.”

Ra Su-heung, director of the Suwon Cultural Foundation, said, “We are planning to establish an outdoor area where people can watch performances and experience culture and arts. It’s our goal to turn this street into the specialty of our town, like Insa-dong in Seoul.”

Carlos Jacanamijoy keeps communication with nature alive through his work