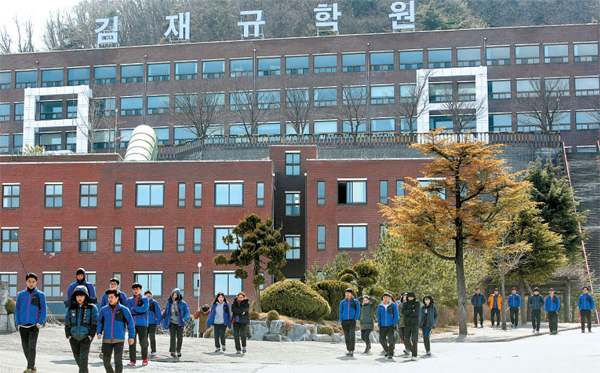 Students at a private preparatory school head to its cafeteria Thursday in Andong, North Gyeongsang. Kim Jae-kyu Academy was originally a four-year university named Kundong University, which voluntarily closed in February 2013 after years of financial trouble and government pressure to rein in its academic programs. By Gong Jeong-sik

Late last month, a junior student studying to become a nurse was one of less than a dozen people seen on a university campus in Gyeongsan, North Gyeongsang. It was winter break, but the girl, surnamed Kim, decided to go to school anyway.

“I came to school today for nursing training, but there was no one on campus,” she said.

“I knew my school was one of the ‘underperforming schools,’” Kim continued, adding that she enrolled at the school because of her major, which has a high employment rate.

Because of the university’s poor management system, the Ministry of Education has limited the scope of the student loans available to those at Kim’s university, and the school’s president, who took over the institution in 2008, wants a way out.

“I want to wrap up the school’s management and liquidate the [school’s assets],” said the 67-year-old president, speaking on the condition of anonymity. “But I have held back on that plan because I wouldn’t be able to recoup the investments I have put into the school following the liquidation.”

The president added there are likely other private school heads who wish to close but are reluctant to do so because there is no exit plan.

As a series of government reforms aim to rein in an expansive higher education network, calls for the government to present an exit strategy for financially troubled private schools are on the rise.

As of last year, there were 433 registered higher education institutions in Korea, including two-year colleges. And yet, only 11 schools have closed. Of the 11, only four schools, including now-defunct Kundong University and North Gyeongsang University of Foreign Studies, have voluntarily shut down.

“The government should come up with a measure that will encourage troubled schools to voluntarily close, as forced closure by the government often takes many years in the process because the issue is often brought to court,” said Hong Seoung-yong, president of Duksung Women’s University, who served as a director on the university structure reform committee at the Ministry of Education.

Education experts say the center of the problem lies in the current law on education, which promises no financial compensation to founding members of the school.

“Many private school founders set up those institutions with money out of their own pockets,” said Choi Yong-sub, the deputy president of Gwangju Health College. “But because the current law gives back no money after the liquidation process, school owners refuse to end their businesses while their schools are in an irrecoverable state.”

Under the current law governing private education, money left over after the liquidation process goes toward the state or into the account of another school rather than the pockets of the institution’s founders.

One chairman of a private university board complained that the government only labels schools as “underperforming” but doesn’t provide an alternative plan for school officials to take.

One president of a two-year vocational college sternly remarked that no school would choose to voluntarily close unless its president is promised by the government that they would be compensated at least for the initial investments in the foundation.

Another president of a two-year college noted that the Education Ministry should consider giving back at least a portion of the money left after liquidation to school owners if the corruption did not result in academic failure.

“Those who oppose this plan have no other alternatives to encourage voluntary closure at a time when restructuring of the college and university network is urgently needed,” the president said.

However, such a contention is not without an objection.

“The moment they start a university with funds out of their own pockets, those funds become a donation to the society,” said Ahn Jin-geol, a policy team director at People’s Solidarity for Participatory Democracy, a civic group. “While they run an institution of higher education, they enjoy all sorts of social respects and fortunes thanks to student tuition.”

He argued that providing compensation to an individual school owner for the voluntary shutdown of the school would essentially amount to a special favor.