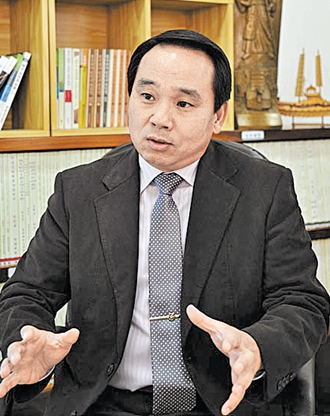 But did the hand-to-hand combat really happen?

The JoongAng Ilbo asked professor Lim Won-bin, director of the Yi Sun-sin Research Institute of Soonchunhyang University, about what is true and false in the record-breaking movie.

A. The numbers vary, depending on documents, but the most widely accepted theory is that Yi had 13 vessels and that there were 133 Japanese ships. Yi’s naval forces destroyed 31 ships among 133 in the Battle of Myeongnyang.

It’s true that Yi said he had 12 ships in a report to King Seonjo before the battle, but in his report to the king after the victory and in the Annals of the Joseon Dynasty, it is stated that Yi had 13 ships. Perhaps Yi obtained or built another ship directly before the Battle of Myeongnyang.

Before the battle, the Japanese naval forces destroyed the Joseon Navy, led by Won Kyun [a Joseon admiral well known for slandering Yi and taking his position as Naval Commander of the Three Provinces during Yi’s imprisonment] in the Battle of Chilcheonnyang. Japan then concentrated its 330 ships in Eoranpo, Haenam. Among the 330 ships, 133 ships passed through Myeongnyang and took part in the battle. The rest of the ships were put on standby.”

In the film, naval commander Bae Seol, who became scared of the Japanese navy, tries to murder Yi, who was pushing for a battle against the Japanese instead of retreating and joining the army in the rear. But Bae gets killed while running away. Did this really happen?

It’s a fact that Bae ran away, but it isn’t a fact that he attempted to kill Yi. Bae suffered from seasickness, was scared of water and wanted to avoid ocean battles. He ran away all the time when under Won’s command.

Bae also took a passive attitude while serving Yi, and he finally ran away just before the battle. Differently from in the film, he was caught and killed while hiding in his hometown.

The scene where Bae tries to murder Yi is not based on reality. Yi was able to win the Battle of Myeongnyang with a few ships because Bae came back with vessels after running away, which is very ironic.

Before Bae ran away, he set fire to the turtle ship (a large war ship used in Joseon times). Is this true?

That’s also fictional. After being defeated in the Battle of Chilcheonnyang, there were no turtle ships left.

According to the “Nanjoong Ilgi” [Yi’s War Diary], Yi told Jeolla naval commander Kim Eok-choo to turn a vessel into a turtle ship before the Battle of Myeongnyang.

Yi wanted to scare the Japanese navy with a fake turtle ship, because his turtle ship was seen as an object of fear. In Yi’s former battles, the turtle ship fought on the front line against enemy ships. In the Battle of Myeongnyang, Yi’s flagship took the role of a turtle ship.”

In the movie, a hand-to-hand fight takes place on the deck of Yi’s ship. Did this truly happen?

This did not happen. Joseon’s naval forces were strong in artillery battles, while the Japanese navy was old-fashioned, focusing on climbing onto enemy ships and fighting hand-to-hand. In the Battle of Myeongnyang, Yi’s flagship only used cannons and arrows. There were no hand-to-hand fights.

But a hand-to-hand fight happened on Captain Ahn Wi’s ship. Three of the Japanese ships attacked Ahn. The Japanese tried to climb up onto the vessel, and soldiers on the Joseon ship pushed the Japanese off. The Joseon soldiers fought them with spears, clubs and rocks to stop them from climbing up, according to the war diary.

During the combat on Ahn’s ship, other Joseon soldiers attacked the enemy. If the Japanese had made it onto Ahn’s ship, it would have been difficult for Korean soldiers to win the battle as the Japanese navy was good at sword fighting. The Joseon strategy was to avoid direct combat.

In order to stop the Japanese from climbing onto their ships, the Joseon’s naval forces built vessels about twice the size of Japan’s. Japan fought with swords, whereas Joseon fought with arrows. The strategy of both naval forces reflected their strong points.”

Did Kurushima, the leader of the Japanese naval forces, get his head cut off by Yi during a fight?

According to the war diary there was a Japanese general, Madashi, who fell into the sea while attacking Ahn’s ship. The Joseon navy dragged him from the water, cut his body into pieces and hung his head on the front of the ship to discourage Japan.

However, we are not sure if Madashi and the film’s Kurushima are the same person. According to Japan’s record, Kurushima died during the Battle of Myeongnyang, but it is very possible that Kurushima and Madashi are two different people.

In the film, there was a Japanese sniper with a rifle. Was the accuracy rate of a rifle from that era high?

Yes, the accuracy rate was quite high, so the sniper action in the movie is not entirely made up. Japanese rifles were small, personal weapons back then that could efficiently defeat Joseon’s cavalry tactics on the ground.

However, in naval battles in which soldiers have difficulty shooting straight and thus choose to shoot randomly in large quantities, Joseon’s arrows were more powerful than Japanese rifles because reloading a rifle took more than 30 seconds but an arrow could be shot every five seconds.

Were there Japanese soldiers like Junsa who worked for Joseon?

There were quite a few of them. They were called Hangwae, which means surrendered soldier. There were many Hangwae working for Yi, and there was a soldier named Junsa. Most of Hangwae’s duties were to translate and act as a lookout.

The Joseon’s navy would hold parties to complement their labor. Back then, there were many Japanese soldiers involuntarily working, building castles in Joseon. Some would surrender to the Joseon’s naval forces because of the forced labor. Junsa takes an active part in the film, but there were no Hangwae actually fighting in battles.”