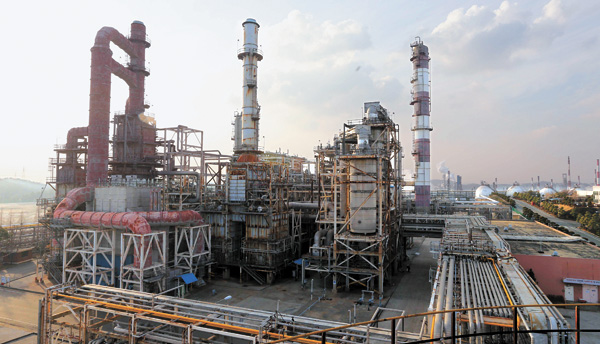 A styrene monomer plant of a major conglomerate in Ulsan is idle after its production was halted last July as the company struggles with falling orders and a shrinking business. By Song Bong-geun

ULSAN - The mood at a production plant in Ulsan’s petrochemical complex hasn’t been the same since July.

This was a plant that used to produce 260,000 tons yearly of styrene monomer, which is used in countless applications including thermal insulation and vegetable and fruit containers.

But since July, the plant, which cost 170 billion won ($157 million) to build, has stopped production.

Most of the management staff has been reassigned to other positions. Only eight out of 32 remain, and they just maintain the facility. 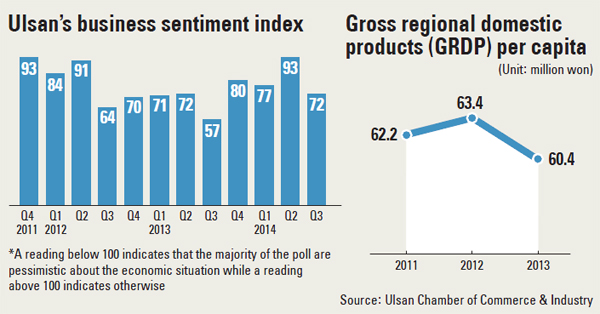 “We’re not sure when the plant will be up and running again,” said Kim Joon-ho, who used to be responsible for plant operation.

The situation of a nearby plant that manufactures terephthalic acid (TPA) is not much different. TPA is the main component in manufacturing plastic bottles and clothes. The plant used to produce 520,000 tons of TPA annually. Currently, all production is on hold.

“In 2013, the self-sufficiency of Chinese companies in production of synthetic fibers was only 61 percent,” said Lim Gu-ha, the production team leader of the TPA plant.

“In just a year, it rose somewhere in the mid-90 percent level. The more we operate the plant, the larger our deficit. For that reason we have decided to shut down the plant.”

The city of Ulsan, the heart of the nation’s manufacturing sector and home to leading heavy industries from automobiles to ships and petrochemicals, has fallen into a critical slump as orders from home and abroad have shrunk.

The city is holding up thanks to Hyundai Motor, whose sales have been better than other heavy industries.

The petrochemical industry is suffering the most among the three economic pillars of Ulsan.

Capro, a company that manufactures caprolactam, which is a key ingredient for nylon, has completely stopped operation of one of its three plants since October 2013. Additionally, the company had to reduce the capacity of one of its two remaining plants down to 20 percent.

The shipbuilding industry is also struggling for survival.

Hyundai Heavy Industries, which dominated the world market and has been a major economic contributor to Ulsan, recently suffered major losses. In the first three quarters of last year, the shipbuilder reported a net loss of 3.2 trillion won. The company is currently accepting the voluntary retirement of 1,500 non-factory employees.

As major conglomerates struggle, so do their small suppliers and business partners.

Ubec is a midsize company based in Ulsan that runs a plant maintenance service.

The company had revenue of 130 billion won in 2012. That figure plummeted to 86 billion won last year.

“I think our revenue could even fall to 50 billion won if the [conglomerates] continue to stop production lines,” said Kim Hyung-shin, Ubec’s CEO.

A packaging company that specializes in export goods recently reduced the number of its employees from 38 to 15.

The company struggles to pay the salaries of its remaining employees.

Its woes are a direct result of conglomerates reducing their exports.

Factories and other companies in Ulsan aren’t the only ones feeling the economic downturn.

On a recent Friday, the owner of a pork belly restaurant closed the shutters of her store at 9 p.m. In the past, the place was packed with customers after 9 p.m., especially on Thursdays and Fridays. The owner said all 15 tables at the restaurant used to be filled with employees from Hyundai Heavy Industries.

“Around this time last year, we had customers until 11 p.m.,” said the 44-year-old owner. “This year we don’t get many customers and there is no reason for us to be open late. We’re directly impacted by the struggles of Hyundai Heavy Industries.”

As many manufacturers in Ulsan struggle and the economic sluggishness continues, many young talents are leaving town and heading overseas.

It’s no longer news in Ulsan that engineers that used to work at the petrochemical complex are landing new jobs abroad.

“When it comes to the technology of operating the plants, we are as competitive as any country,” said a plant official. “But at this point, even our plant operation abilities are being spirited out of the country in the form of a brain drain. At this pace, I’m worried that our nation’s manufacturing industries will die out.”

A Korean chemical fiber company recently realized that a newly built Chinese plant was more than 95 percent similar to its own plant. The Chinese company also recruited one of the Korean company’s main engineers.