Pizza Bocca Lupo in San Jose, California, checks the freshness of the ingredients through a portable electronic nose known as Peres.

Peres, developed by ARS Lab, detects whether ingredients like meat and fish are fresh based on temperature, humidity, ammonia and flammable organic compound content levels.

Restaurant manager Patrick Dunne said that the portable electronic nose is efficient and affordable, at $120. Instead of difficult jargon, the freshness reading is displayed via an easy-to-understand graph.

Development of technologies that replicate sight, hearing, touch, smell and taste has been under way for decades. But the industry seems to be seeing a sudden boost thanks to the rapid development and application of the Internet of Things (IoT) and big data.

The sensor industry is considered to be the next big technology evolution. It was one of the hottest areas at the Consumer Electronics Show (CES) in Las Vegas earlier this month, where The Eye Tribe’s $99 eye tracker received the best innovation award. The sensor reads eye movements and executes commands on computers and other devices.

Previously, a user playing a musical score on the screen of a tablet PC had to stop to turn a page. Now the eye tracker senses how far the player has read and automatically turns the pages. According to a report released Monday by Korea Electronics Technology Institute, the convergence of sensors and the latest IT technology could have applications in finance, medical, education and health care sectors.

It is said that using a smartphone, sensor technology allows us to read the temperature, humidity and even atmospheric pressure. Back in the 2000s, mobile phones had only about four or five sensors, compared to 20 today.

In cars, there are roughly 200 sensors of as many as 30 different types. That is four times more than the number of sensors found in cars in the 1990s.

Thanks to the sensors, smart cars are being developed in a way that they can maintain a specified distance from vehicles at the front and the back when in motion.

Even at the heart of the so-called financial technology, or fintech, there is sensor technology.

Apple Pay, the payment system introduced by Apple last year, uses fingerprint recognition technology. The payment is automatically made when a buyer puts a finger on the touch ID.

Korean researchers and developers have been making progress of their own. In 2010, Seoul National University professors Park Tai-hyun and Hong Seung-hun developed the world’s first bioelectronic tongue made of protein.

The tongue’s electronic sensor can detect different tastes, including even the faintest bitterness from vegetables like kale.

Even if a particle that creates sweet or savory tastes is mixed with other ingredients, the sensor could still distinguish the hidden bitterness.

The research team that developed the bioelectronic tongue says its sensors are 100 million times more sensitive than the human tongue.

Once the technology is commercialized, IT equipment will be able to replace people in checking and maintaining the quality of testing in food and beverage products.

For example, through sensors a winery could maximize the maturity of a wine by calculating the sugar content and acidity. They could also be used to detect low-quality wine.

Fido is an electronic nose developed by the company Nomadic. It detects landmines through the scent of gunpowder.

The Korea’s Rural Development Administration is currently working on an electronic nose analysis system that could sort different orchids based on variations in their scents.

Researchers say once the technology develops further, it could be used to prevent everything from terror attacks to gas explosions by detecting the faintest of smells.

It could also be used to detect gunpowder and drugs.

Other than taste and smell features, technology developments involving the other three senses - visual, audio and touch - have shown progress.

In a recent report, IBM projected that by 2019, computers will be capable of replicating human senses. 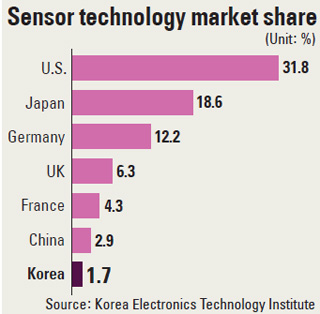 It is said that in the near future, people will be able to “feel” the texture of fabric materials used in a cloth via their smartphone screens when going shopping, and the digital device will be able to analyze the emotions and health condition of a baby just by listening to its cries.

“We’re right on the edge of technology development that can realize telepresence, which allows people to experience things that are actually located a long distance away as if they were right in front of you,” said Kim Kyung-hoon, head of the Korea’s Trend Research Institute.

“Blended sense that maximizes the five human senses with digital technology will surface as a new trend.”

As the urge for convenience and safety continues to grow, demand for the latest sensor technology is expected to rapidly expand, according to industry experts.

Incorporating such sensor technologies not only in automobiles and mobile equipment but also in robotics and medical devices is considered necessary for strengthening the competitiveness of the country’s industry in the future.

The Korea Electronics Technology Institute study projected that the world’s sensor market would expand from $64.1 billion in 2010 to $141.7 billion in 2020.

Especially as the IoT, which is considered the next generation growth engine, becomes more generally used, sensor technologies are expected to grab more interest.

Sensors installed in every corner of a building and connected to the IoT will be able to manage power use more efficiently. Sensors installed in parking lots or dangerous places will be used in preventing criminal activities by analyzing the data collected.

Because such technology holds huge potential, global IT companies are rushing to take the lead.

Such competitors include Honeywell, Bosch and ST Microelectronics, as well as software giants like Google and Apple. All are making huge investments.

Korean tech giant Samsung Electronics is also jumping in. It recently introduced a smell detecting microsensor that can distinguish different smells on 20 pieces of paper. It also introduced a movement cognition sensor that could spot even the slightest movement.

“Sensors are more important than anything else in ushering in the era of IoT,” said Yoon Boo-keun, Samsung’s CEO of consumer electronics. “If a sensor company secures the fundamental technology, in the next few years it will see huge success.”

However, although Korea is considered one of the major players in the world when it comes to IT, it is believed to be half as far along as United States, Japan and Europe in the development of core sensor technologies.

“For Korea to become one of the leading IoT nations, it needs very aggressive investment in sensor technologies on the national level.”