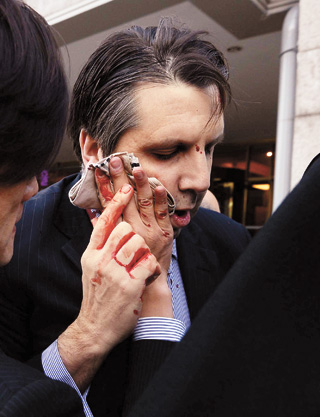 U.S. Ambassador to Seoul Mark Lippert is taken to a hospital on Thursday, holding his bleeding cheek, after he was injured in the face and wrist in a knife attack by an anti-America activist in the Sejong Hall of the Sejong Center for the Performing Arts in central Seoul, where Lippert was to give a lecture. [NEWSIS]

U.S. Ambassador Mark Lippert was attacked by an anti-American activist wielding a 25-centimeter (9.8 inch) knife at a breakfast function Thursday morning and sustained wounds to his face and wrist.

Lippert was rushed to a nearby hospital for initial examination and then moved to Yonsei University’s Severance Hospital for two surgeries, including 80 stitches on his face. The surgeries were successful and Lippert was tweeting a positive message by 4:34 p.m.

Lippert, 42, is known to have close personal ties with the White House and an extensive network within the National Security Council and the Pentagon. He has been highly engaged with the public in Korea, even setting up a twitter account in the name of his basset hound pet, Grigsby.

“The suspect shouted slogans about peace and unification of the Korean Peninsula, against war and against the Korea-U.S. military drills,” said Shin Jae-hyun, director-general for North American Affairs at the foreign ministry. “Kim used a 25-centimeter-long knife to attack the ambassador and he sustained five injuries including an 11-centimeter cut on his right cheek.” 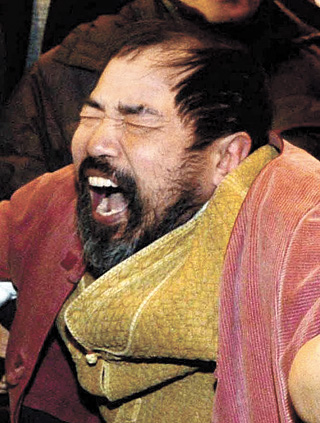 The knife-brandishing attacker Kim Ki-jong is arrested at the scene. [NEWSIS]

According to Shin, Lippert was first sent to Kangbuk Samsung Hospital around 7:50 a.m. and then moved to Severance Hospital at 9:22 a.m. for surgeries. According to the plastic and orthopedic surgeons who performed the operations, two surgeries were carried out simultaneously and they took about two and a half hours.

A group of doctors who treated Lippert held a press conference in the afternoon and said it took 80 stitches to close the wound on Lippert’s face. The 11-centimeter-long cut was about 3 centimeters deep, they said. The ambassador also suffered a penetration wound, about 3 centimeters long, on his left arm.

Professor Choi Yun-rak, who performed the surgery on his arm, said the nerves of Lippert’s pinkie were damaged, and that the tendons of thumb and index finger were also partially cut. “The nerve repair went successfully, and the fingers will fully recover their functions after about six months,” he said.

When Kim arrived at the police station at 12:30 p.m., journalists again asked why he attacked Lippert. Kim said, “Only in this way will the Americans come to their senses.”

“Because we sent the unit without an official request, we could not search the participants unless the event organizer, the Korean Council for Reconciliation and Cooperation, or the U.S. Embassy makes a request,” he said.

According to the Korean Council for Reconciliation and Cooperation, Kim was invited to the event, but did not RSVP. The organizer allowed Kim’s entry.

The police assigned four police officers to protect Lippert as of 10 a.m. Thursday and three to protect his wife Robin.