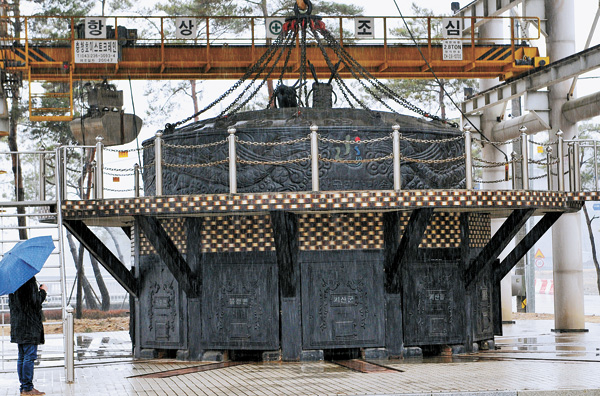 After failing to make it into the Guinness Book of World Records as the largest iron cauldron when it was completed in 2005, the 450,000 dollars rice pot in Goesan County, North Chungcheong, is a lonely landmark. By Kim Seong-tae

Goesan County, a rural area 160 kilometers (99 miles) southeast of Seoul in North Chungcheong, is home to 40,000 people proud of their main local product: rich gold corn. But corn isn’t much of a draw for outsiders, and former county chief Kim Mun-bae wanted to attract visitors to boost the regional economy through tourism.

Kim’s solution was to build the world’s largest gamasot, an iron cauldron used for cooking. Kim believed it would become a landmark that would attract tourists from around the world. He vowed to get it certified by the Guinness Book of World Records. Locals, he said, would also get great joy in gathering for casual rice-cooking events.

But people haven’t come to see Goesan’s pot. One problem is that Kim hadn’t done his research. There’s a bigger pot in Australia. 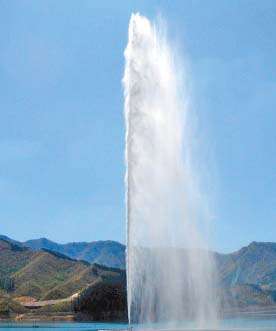 A fountain in Jinan County, North Jeolla, has been abandoned. [JoongAng Photo]

Another is that not many people travel to see big rice pots.

“At the back of our minds, some of us wanted to vote down the project,” recalled Lee Gil-jun, 74, a former official at the Goesan County Office. “The plan to register it with Guinness is what eventually made us go along with the plan.”

Tourists don’t come to see the pot. When the locals tried using it for cooking rice, it did a poor job. Sometimes it’s used to cook corn.

Many regional governments are having budget problems and ill-conceived schemes are often to blame.

“It’s a crime,” said Yoon Jong-bin, a political science and diplomacy professor at Myongji University in Seodaemun District, northwestern Seoul. Heads of regional governments are “wasting taxes” to boost their own profiles by initiating such wasteful projects, he said, and the taxpayers are the losers.

“If they’re caught overstating the expected benefits of those projects, they should be forced to compensate for the financial losses to some degree.”

Reporters from the JoongAng Ilbo recently tracked down regional governments across the country that pushed ahead with costly projects that didn’t pan out the way they said they would.

In Seo District, Daegu, a hiking trail stretching 2.2 kilometers along the Dalseo Stream is currently under construction and should be finished late next year. The project, first introduced by former district chief Seo Jung-hyun, was started in 2012 in the hope that it would become Daegu’s version of Cheonggye Stream in central Seoul.

What also runs along the 6.5 billion won project, though, is an industrial zone of some 140 factories.

“Who would ever want to go hiking there when people usually make a detour around that area?” asked Choi Seong-jin, a 37-year-old Seo District resident. The pungent odor of ammonia is definitely going to keep hikers away, he predicted.

Over half of the hiking trail’s budget of 3.9 billion won is funded by the central government.

In Icheon, Gyeonggi, 80 kilometers west of Seoul, an agricultural theme park opened last November was supposed to draw people eager to learn about rice produced there, according to the plan presented by Mayor Cho Byeong-don.

Spread across 150,460 square meters (37 acres), or the size of more than 20 soccer fields, the Icheon Agricultural Theme Park cost 20 billion won to construct.

The average number of visitors per day is less than 20 - and admission is free.

On a recent sunny Sunday last month when the temperature reached a fine 18 degrees Celsius, JoongAng Ilbo reporters counted the number of people strolling through the park. Roughly 30 were spotted the entire afternoon.

In the four months since its opening, only 2,000 people visited.

“We made a long trip here, but there’s really nothing much to enjoy,” said Kim Yeong-ho, who was at the park with his whole family that Sunday. The 41-year-old from Yongin, Gyeonggi, continued, “I think it’s just a [meaningless] establishment that drained our tax money.”

The central government subsidized 2 billion won of the park’s cost.

Inefficient budget-planning was also at work in Jinan County, North Jeolla, where a fountain that cost 4 billion won currently lies dormant. Built in 2005 at Yongdam Lake, what supposed to be the highest water fountain in Asia turned out to be a burden for the county office when its maintenance bills came in.

To operate the fountain at a full height of 170 meters, 200 million won worth of electricity was required per year, prompting Jinan government officials to completely ditch the landmark a year after it was completed.

Plans to decompose the fountain and sell it for scraps this year also fell through when no one volunteered to buy them. The country expected to get 700 million won.

That idea, he says, “would be a shortcut to reducing tax money going wasted, and will also bring fairness to the country’s budget-funding system.”

Yook dong-il, a local administration professor at Chungnam National University, said the waste will likely continue as long as regional government chiefs desire to add to their list of achievements, and local councils turn a blind eye to their foolish ambitions.

A policy that would put a break on that, to some extent, would be the central government reclaiming funds it offered to regional governments when it turned out they amplified the expected impacts their projects would have on the community, said Yook.