Surf’s up at spots all over Korea

Surf’s up at spots all over Korea 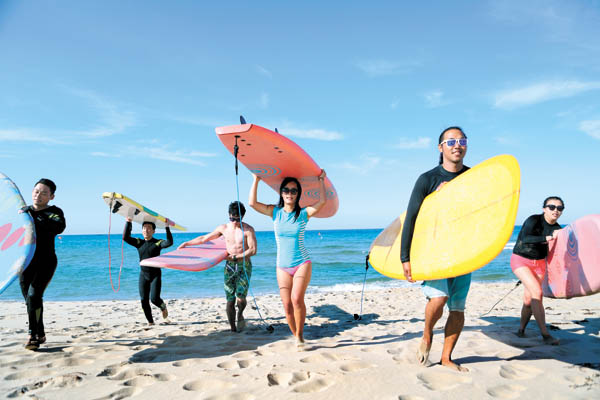 Surfers carry their boards on the Surfyy Beach, Korea’s first beach exclusively for the sport, in Yangyang, Gangwon. Provided by GEOCM

BUSAN, JEJU, YANGYANG, Gangwon - Add another water sport to a to-do list for this summer: surfing.

Korea might not be world-renowned as a major surfing destination due to its typically small waves, but avid surfers are trying to use that to attract more first-timers.

All the coastal areas of the peninsula, as well as Jeju Island, offer places to surf. Since the conditions don’t differ very much, surfers can simply choose the beach closest to their home.

But since there is a rising number of novice surfers, Korea now has its first beach reserved exclusively for surfers, in Yangyang, Gangwon. The area on the East Sea has become popular in recent years, especially among Seoulites, due to its proximity to the capital. 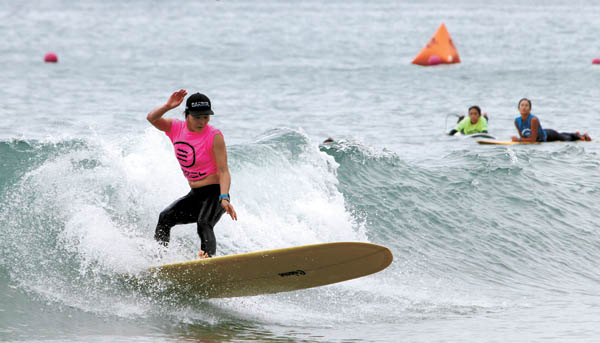 A surfer rides a wave in Busan. [JoongAng Ilbo]

One indicator of the sport’s popularity is the increasing trendiness of rash guards, the quick-drying shirts that prevent abrasions caused by surfboards. But these days, the threads are a must-have component of vacationers’ beach looks, whether or not they’re actually riding the waves.

“People look for diverse options to enjoy their leisure time, and that naturally led them to seek out all kinds of water sports,” said Eugene Lee, one of the founding members of the Korea Pro Surfing Association, saying about one million people in Korea have surfed at least once.

“As the sport has been enjoyed by many celebrities recently and gained a lot of media exposure, it’s getting more and more popular” 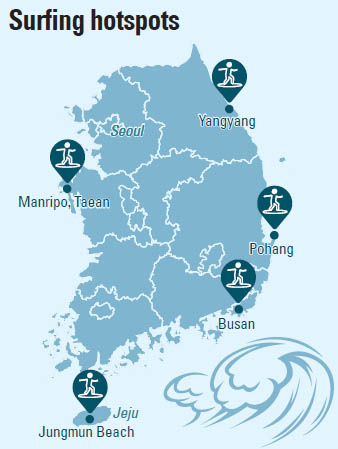 It’s been five years since shops catering to surfers started popping up around Korea’s coastal areas, and now there’s an entire beach reserved for those who want to ride the waves without worrying about clashes with beach dwellers.

Named Surfyy Beach, it is about one-kilometer-long (0.6 mile-long) so that surfers of different levels won’t interfere with one another. Depending on the wind and weather conditions, the beach can be perfect for beginners with small waves, or can offer more of a challenge to skilled surfers with larger swells.

“We try to invite surfers of all level as we intend to make the sport better known in Korea,” said Park Jun-kyu, CEO of Surfyy Beach.

“With the amount you’d pay to go to a local water park, you can have a fun time in the water and by the beach, a place to sleep and a free concert at night. It’s more like an all-inclusive package for summer vacationers.”

Visitors can drive to the entrance of the beach, and across the road from the sands are camping spots where visitors can stay overnight. There’s no need to bring camping gear or supplies, as Surfyy Beach staff will set up a cozy tent for visitors on request.

Camping cars are also available for those who want a more comfortable and slightly more private experience. The cars can fit two people comfortably and have a bathroom with shower, a dining table and a bed. An air-conditioning unit is set up to fight the summer heat and a small TV can entertain you when you don’t spend time outside mingling with others.

Since the area by the East Sea is protected by many regulations to preserve the land, it is not possible to cook in front of your camp. Instead, food trucks serving all types of barbecued meat or popular Korean-style snacks such as tteokbokee, sticky rice cake covered in spicy sauce, will open up around the camping area. A juice bar and a coffee shop have already opened.

“We want people to feel the night breeze by the sea and get some experiences they don’t get in the city when they’re out here,” said Park.

The beach was supposed to be set up with food trucks and music concerts by the time it opened about three weeks ago, but the outbreak of the Middle East respiratory syndrome (MERS) caused many of the vendors and musicians to cancel.

Things seem to be picking back up, however, as Surfyy Beach announced its lineup of musical acts scheduled to perform for the rest of the month.

Upcoming highlights include performances by rappers MC Sniper on Aug. 8 and Verbal Jint on Aug. 15.

Another merit of Surfyy Beach is that it’s been relatively untouched; for the past 40 years, it’s been designated as a military zone.

There are still wire fences all along the beach to make people feel like they are going somewhere forbidden. The government is planning to remove the fences soon, but the beach’s staff are considering keeping them around to make the atmosphere more distinctive and to be used in future art projects.

Experienced or professional surfers are always on the lookout for bigger and better waves, preferring the shapes of the swells at certain spots over others.

But to the less experienced - and less picky - laymen, most spots will do just fine as long as the day is calm and the wind isn’t blowing too hard.

The spots on the East Sea are especially popular among people living in or near Seoul, as it takes less than three hours by car without traffic. However, the water is frigid even during the steamy summer season, so surfers are urged to wear wetsuits to stay warm. Alongside Yangyang in Gangwon, Pohang in North Gyeongsang is also a popular surfing spot.

Compared to the East Sea, the South Sea offers much warmer water. Busan and Jeju, both well-known vacation spots, offer the most resort-like atmosphere of any surfing destination in Korea, with amenities galore. The downside is that because the locales are already popular among all types of vacationers, their beaches are often crowded with sunbathers and others in the water. This can make it difficult to find a place to surf without risking an accidental collision.

Jungmun Beach in Jeju is also popular among surfers. Due to its proximity to the Jungmun Resort Complex where hotels are concentrated, some of the luxury hotels offer surfing lessons as part of their programs.

Although it is possible to surf in the West Sea, the region is not very popular because there are few waves. Occasional swells draw surfers, and while the lack of thrills won’t appeal to those with experience, the area can be a solid choice for beginners.

Manripo in Taean, South Chungcheong, is one of the most popular destinations in the western coastal area.

To get started, beginners need to first choose a shop where they can rent a board, wetsuit or rash guard, as well as a qualified instructor. The 25 shops registered with the Korea Pro Surfing Association are all safe bets, and can be found by checking with the organization. If you go with a different shop, be sure to check its qualifications and safety regulations.

In the very first session, which will last about two hours, beginners will start on the beach, practicing the series of movements necessary to hop up onto the board when a wave comes.

After the movements have been mastered on land, the surfer-to-be will catch waves with the help of the instructor, who will give the student’s board an extra push to get them out and going.

Once the student is comfortable getting waves with their instructor, he or she is free to try to grab a wave solo - but most are too exhausted to spend any more time in the water.

The Korea Pro Surfing Association provides a five-step training program for those who want to advance further. Once the first-level is done, novice surfers can go to any surf shop and rent a board without getting more training. The training program isn’t internationally used, but experienced local surfers set up the rules to ensure the safety of beginners.

Surfing is a whole-body workout, with surfers jumping onto the board, swimming or paddling the whole time. First-timers can expect some soreness in their back and upper thighs after their first session on the water.

Besides making you physically fitter, surfing is also a great way to foster patience. Surfing is an active sport, but it also requires a lot of waiting for the right wave.

Before you make a trip out to a coastal area, make sure to call a local shop by the beach for the weather conditions for the day of the scheduled trip. Most surfing shops will refund any advance purchases if the weather makes it impossible to go out in the water.

For more general information about surfing in Korea, reach out to the Korea Pro Surfing Association at (070) 4209-7314, or go to www.surfingkorea.org. For more detailed information about Surfyy Beach, go to surfyy.com.