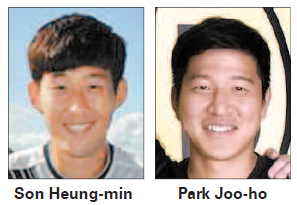 Expectations are high that the two Koreans who signed for major league teams in Europe will help transform the fortunes of their new sides.

Within 24 hours of each other, Son Heung-min completed his anticipated move to Tottenham Hotspur and Park Joo-ho signed with Borussia Dortmund.

Tottenham announced on Friday that it has signed a five-year deal with Son from Bayer Leverkusen in the German Bundesliga. The transfer fee is reportedly 22 million pounds ($34 million), making the 23-year-old forward the most expensive Asian player in history.

The previous record was held by retired Japanese midfielder Hidetoshi Nakata, who moved to Italian side Parma from Roma in 2001 for a reported fee of 25 million euros ($28 million). Son previously cost 10 million euros for his transfer to Leverkusen from Hamburger SV in 2013.

Son, who had 29 goals in 87 matches with Leverkusen, was officially introduced to home fans on Saturday at White Hart Lane before Tottenham faced Everton in their fourth match of the English Premier League (EPL).

Son, who was given jersey No. 7, did not play in the match because there is still some outstanding paperwork to be completed before he can make his debut on the pitch.

He watched the game from the stand, where his new team could only manage a 0-0 draw against Everton.

“I am very pleased and honored to work together with good players such as Harry Kane, Christian Eriksen and all the players at Spurs,” Son was quoted saying on the team’s official website. “I’d like to help them perform and, together with them, make our team even more successful.”

In the match against Everton, Son’s position was played by Belgian international Nacer Chadli, who failed to produce threatening moments during the match.

Korean football fans hope Son will break the goal-scoring record for a Korean player in the EPL. Ki Sung-yueng of Swansea City last season scored eight goals in the league, having the most goals in a single season, while retired footballer Park Ji-sung amassed 27 goals and 26 assists in his 205 matches with Manchester United from 2005 to 2012.

“In the Premier League there are a lot of good players, so I have to really work hard and be prepared to show my ability,” Son said on the Hotspur website. “Bold and daring - this is how I like to try to play.”

While showing killer instincts is a task for Son, Park is hoping to become a regular member for the eight-time Bundesliga champion Borussia Dortmund.

Dortmund on Saturday announced the signing of 28-year-old Park from Mainz 05 on a three-year deal, making him the third Korean to play for the club after Lee Young-pyo and Ji Dong-won. The reported transfer fee is 3.5 million euros.

Park, who previously played with Swiss club FC Basel and Japanese clubs Kashima Antlers and Jubilo Iwata, is expected to play mainly as a left back, though he can also play in midfield.

Dortmund’s sport manager Michael Zorc said, “Park Joo-ho is a perfect addition to our squad at left back.”

The left back position is currently taken by German international Marcel Schmelzer, and if the injured Erik Durm returns to the squad, the competition for the position is likely to be fierce, with some worrying that Park may just be a bench-warmer. However, Park has trust in Dortmund manager Thomas Tuchel. The 42-year-old manager brought Park to the German Bundesliga when he was coaching Mainz 05. Park joined Mainz from FC Basel in 2013.

“He is open, funny and helps unite the team”, Tuchel said on the Dortmund website. “He can defend well, is good on the ball and is able to counterattack”.

The two players were originally included in the national team squad for both of the World Cup regional qualifiers.

The KFA said that national team coaching staff, including head coach Uli Stielike, met on Saturday and decided to exclude them because of their personal situations after their transfers.

The KFA said that since Son needs to complete paperwork in Korea to get an English work permit, it decided to leave him out of the national team’s trip to Lebanon. The KFA said Park needed time for personal issues, such as finding a new home, and allowed him to join the national team next week.