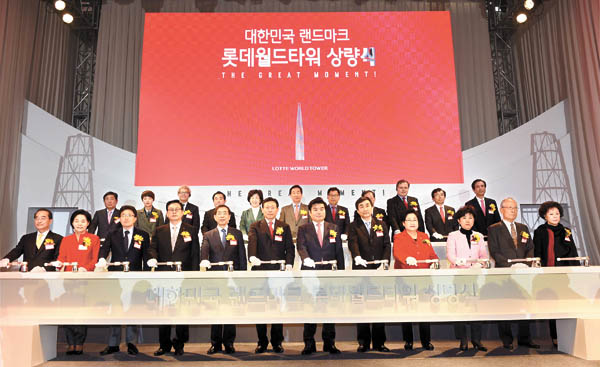 Exterior construction, as part of the project known as the “second Lotte World,” has now wrapped up five years after it started in November 2010. The high-rise is set to be completed a year from now to become the world’s fifth-tallest building.

Even though the second Lotte World project was the brainchild of 94-year-old Lotte founder Shin Kyuk-ho in 1987, he did not show up at the ceremony to put up the ridge beam, a symbolic act traditionally carried out by builders in Korea to wish luck and prosperity to a building. A 64-ton tower crane on the top of the building dragged the 7-meter (23-feet) H-beam from the ground to the top, which took half an hour.

“It will be more meaningful if the general chairman attends the opening ceremony next year,” a Lotte spokesman said, adding that Shin’s health and the cold weather were factors involved in his staying away.

His son, Lotte Chairman Shin Dong-bin, expressed his respect and appreciation for his father at the ceremony, which was attended by some 200 business and government representatives.

The completion of the exterior of the building comes as the Shin family feud over the control of the retail conglomerate continues. The power struggle began in July when Shin Dong-joo, the patriarch’s older son and former vice chairman of Lotte Holdings in Japan, attempted to have his younger brother Shin Dong-bin ousted from Lotte, only to see the scheme backfire. The father was sidelined to the honorary position of general chairman, and the younger brother assumed the chairman post.

The Lotte founder earlier pledged to move his residence and offices to the 114th floor of the skyscraper from the Lotte Hotel in Sogong-dong, central Seoul. Shin Dong-bin is considering moving into the new building, too.

“Lotte World Tower, which has been established under my father’s will to leave a landmark in his homeland, will become an architectural landmark loved by the world,” Chairman Shin said in a speech during the ceremony.

Lotte World Tower is known as the “dream of Shin Kyuk-ho.” He came up with the idea in 1987, a year before Korea hosted the 1988 Seoul Olympics, to develop the Jamsil area into a tourism magnet. He thought it was time foreign tourists have other places to visit in Seoul than ancient palaces.

Lotte broke ground for the then-named Lotte Super Tower in 2006. But construction was suspended until 2009 after hitting various snags, including safety concerns over military aircraft taking off and landing from Seoul Air Base, which is only 5.7 kilometers (3.5 miles) away.

Public fears over safety have haunted the project over the past five years, as cracks were discovered on the floor and ceilings of the Lotte World Mall, and minor accidents followed.

The tower is now 508 meters high and will be as tall as 555 meters when a steeple is added. Lotte will work on interiors in the coming year. The tallest buildings in the world include the Burj Khalifa in Dubai, Shanghai Tower, Abraj Al-Bait Clock Tower in Mecca and One World Trade Center in New York.