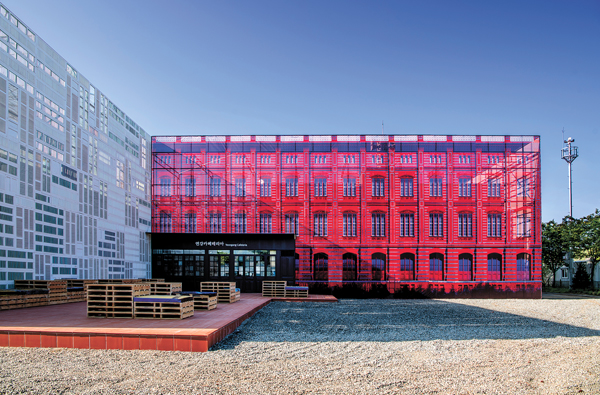 What was once a security exhibition center has been renovated into Yeongang Gallery, the first-ever art gallery within the civilian control line. It is covered with photo-printed screens and walls made of 680 doors from around the world. [THE GONG GAM]

YEONCHEON COUNTY, Gyeonggi - Landscapes of surreal and paradoxical beauty unfold when visitors pass a security checkpoint and cross the civilian control line in Yeoncheon County, whose northern border is the demilitarized zone (DMZ).

The Imjin River, fields and mountains along the river, with less human impact than other rural areas of Korea, make such idyllic and peaceful scenes that they look unreal sometimes. But from time to time, the sounds of gunfire, sirens and North Korean broadcasts toward the South interrupt the tranquility.

The standoff between the two Koreas, as evidenced by those sounds, has kept the region from industrial development, ironically protecting its unique nature.

Unsurprisingly, this area is inspiring to artists. The paradoxical beauty of the place is exquisitely represented in artist Han Sungpil’s photograph “Observation” and video work “Uncanny Serenity,” now on display at Yeongang Gallery in Yeoncheon. 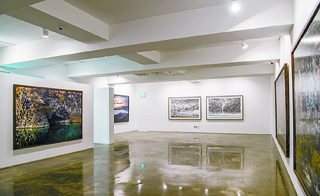 On the second floor of Yeongang Gallery are hanging photographic works by Han Sungpil as part of the gallery’s inaugural exhibition, “Innocence.” [THE GONG GAM]

The first-ever art gallery within the civilian control line opened on Thursday with the inaugural exhibition titled “Innocence.” It is Han’s solo show featuring 11 of his photos and the video piece.

The gallery, with an air-raid shelter next door, was once a security exhibition center. As part of the renovations, Han and designer Cho Sang Gi covered the walls of the building with photo-printed screens and walls made of 680 doors from various countries. The walls will also bear messages of peace from 17 countries including Canada and Turkey. And Han will replace the photo-printed screens every three years. Now, some of the screens feature photos of Yeoncheon’s unique volcanic landscapes, including columnar jointing. The photos are also exhibited inside the gallery.

“Working in Yeoncheon is re-understanding a place I once thought I knew somewhat,” the artist told reporters at a preview on Wednesday. “The tensions between the two Koreas isolated this area from Korea’s rapid postwar industrial development. As a result, it preserved Yeoncheon’s columnar jointing and other geographical features that were formed by lava even before humans appeared. They embody the sublimity of accumulated time - much longer than the history of tensions between the two Koreas.”


The exhibition runs through Nov. 20. The museum is located at Hoengsan-ni 243, Jung-myeon, Yeoncheon County. A valid photo ID is required to pass the security checkpoint. For details, call (02) 2268-1973 or e-mail info.yeonganggallery@gmail.com.