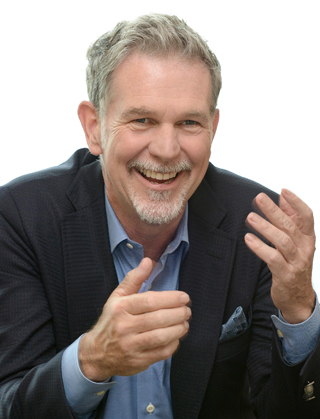 Reed Hastings, co-founder and CEO of Netflix, speaks during an interview on Thursday at the Conrad Seoul in Yeouido, western Seoul. [NETFLIX KOREA]

Netflix has attracted an estimated 100,000 subscribers since it entered Korea at the beginning of this year, less than one-tenth the figure of homegrown video-streaming services.

But Reed Hastings, co-founder and CEO of Netflix, says such early numbers don’t worry the company, which considers Korea a “super important market” and a key source of content.

“Korea has two important values,” he said in an interview Thursday on his first official visit to Seoul. “First, it has enormous broadband usage, and people love entertainment.

The CEO noted that Netflix is making “zero profit” in Korea because it is investing much more in content than it gets in revenue, which is true, too, in other countries it entered recently.

It will take roughly seven years for Netflix to break even in global markets, he added.

The home of “House of Cards” launched in Korea in early January with three monthly plans costing $7.99, $9.99 and $11.99 as part of its push to expand its horizon beyond home. The video-streaming giant currently has 81 million subscribers across 190 countries, including 58 million within the United States.

As part of its long-term strategy to grow by betting on original content, the nine-year-old internet TV network company has been shooting director Bong Joon-ho’s “Okja,” a feature film starring Tilda Swinton and Jake Gyllenhaal, since April, and the movie is scheduled for global release next year. The film deals with a Korean girl’s friendship with a massive, eccentric animal named Okja.

The latest mega-hit Korean TV drama “Descendants of the Sun” will be released on Netflix in the United States, Canada and South America near the end of this summer.

Shooting for the second season of “Sense8,” Netflix’s American science fiction television series created by Lana and Lilly Wachowski and featuring a handful of Korean actors, is starting imminently in Seoul.

In regards to Netflix’s shortage of Korean films and dramas when compared to other internet video services - a major complaint among Korean subscribers - Hastings said the company is still learning and analyzing the Korean market, and vowed to provide additional content over time.

There have also been grumbles from users here about Netflix requiring users to prove their dates of birth to watch R-rated content. That process only applies to the Korean market. Not even Singapore, notorious for rigid rules when it comes to adult content, requires it. Korean users are also disappointed with pixelation over nudity.

But Netflix appears more cautious about its relationship with Korean authorities than satisfying its subscribers, whereas some multinational operators try to fight red tape that does not exist in other markets.

“We comply with government regulations because they reflect social standards of the countries in which we operate,” Hastings said.

The Los Gatos, California-based company currently has its Singapore office as headquarters for its Asia-Pacific operations, and Hastings said it has no plan to establish another office in Korea. He refused to confirm news reports that the company is getting ready to add a new feature that would allow users to temporarily download content.

The entrepreneur who launched Netflix initially as a flat-rate DVD rental-by-mail service in 1997 was making his first official visit to Seoul on Thursday for a large-scale press conference and interviews with the Korean media. Three days earlier, he vowed to offer more non-English dramas, including Japanese shows, in front of the press in Tokyo, where Netflix began last September.

The company has yet to be allowed into China, which Hastings described as a “very complicated market.”