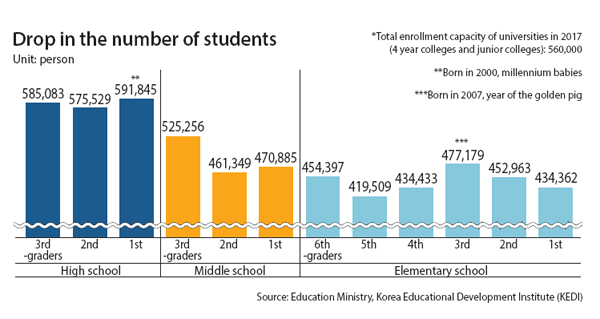 The low birthrate, which plummeted drastically after the year 2000, is now alarming schools as they are seeing a clear drop in their numbers of students.

There were 634,501 newborns in 2000, according to the Education Ministry and the Korea Educational Development Institute (KEDI). Of these, 591,845 entered high school this year. But the number drops sharply with younger students. There were, for instance, 525,256 middle school third-graders born in 2001.

The number of current students hits its lowest point with 419,509 students born in 2005, then rises to 477,179 born in 2007, and drops again, the KEDI said. The rise is perhaps the result of the symbolic meaning associated with 2007, marked as the “year of the golden pig,” and thought to be a lucky year.

This year’s average number of students per class is 22.4 for elementary school, 27.4 for middle school and 29.3 for high school, according to the Education Ministry and the KEDI. As for high school, this is the first time for the number to drop below 30. Before 1990, when the parents of these students attended schools, there was an average of 41.4 students per class in elementary school, 50.2 in middle school and 52.8 in high school.

While the population decrease has resolved the long-lasting problem of overcrowded classes, schools are now having a hard time keeping their students. Kyodong Elementary School in Jongno District, central Seoul, currently holds a total of 118 students. Having a history of holding 5,600 students in 1967, the school feels emptier than ever.

Facing the difficulties of keeping the student capacity full, Kyodong Elementary School Principal Bae Chang-sik has permitted newcomers regardless of their residence, whereas normally, children may only attend elementary schools in the school district of their residence, but with the permission of the school principal, those living in other districts may transfer in, as well.

“Nearly 30 percent of our students come from other districts such as Seocho, Eunpyeong, and Seongbuk District,” said Bae. “We are trying to attract students by enhancing the quality of classes and after school activities.”

Universities are the most worried. In 2019, 590,000 millennium babies will graduate from high schools and enter universities. But in 2020, the number of high school graduates will drop to 520,000, lower than the total enrollment capacity of all universities in Korea, which is 560,000 for the freshmen of 2017.