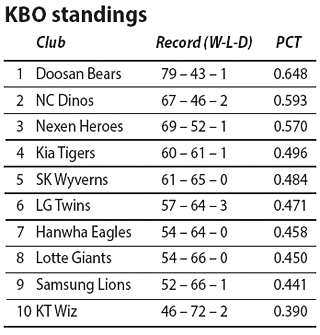 After defeating Lotte Giants 4-3, KIA Tigers are now one step away from 50% winning rate

The KIG Tigers are only one victory away from reaching a winning rate in the 50s.

The Tigers defeated the Lotte Giants on Sunday 4-3 to finally reach the 60-win mark this season. Adding that one win turned out to be tougher than the Tigers expected, who lost to the Giants just a day earlier by 1-2, despite starting Yang Hyeon-jong, the team’s ace pitcher. But the win on Sunday came as a milestone for the Tigers as they prepare themselves for the coming postseason.

The Tigers had reached the 50 percent margin before but it all went south when they lost to the SK Wyverns on April 13. Since then, the Tigers struggled and at one point in June, were ranked as low as ninth in the league. But since then, the Tigers piled on one win after another to finally climb back to the top. Were it not for the loss on Saturday, Sunday could have been the day to break 50 percent for the first time in five months.

Still, the Tigers now have some room to breathe. In the second half of the season, the Tigers are recording 21 wins and 17 losses.

While the Wyverns struggled, recording a winning rate in the meager 40s, the Tigers pushed forward and finally recaptured fourth place past the Wyverns.

The win over the Giants on Sunday is meaningful in a number of ways. The Tigers were ranked seventh in terms of team earned run averages after August and the slump by the pitchers continued to haunt the club. It was the batters that kept the team going by tallying 1.54 home runs per game on average. But the ever-struggling pitchers of the Tigers looked solid Sunday.

It was the relievers that shared the burden of the win. Starter Kim Yun-dong climbed down the mound without completing five innings after conceding three runs. But Ko Hyu-jun, Kim Jin-woo, Yoon Suk-min, Sim Dong-sub and Lim Chang-yong did more than their share, pitching for four and 1/3 innings total while giving out only one win and no runs, an impressive feat that was the engine of the Tigers’ victory.

The Tigers now travel to Incheon to play against the Wyverns. The two are still in rivalry for the fourth-place in the standings so the two-away games series comes as quite a burden for the Tigers. 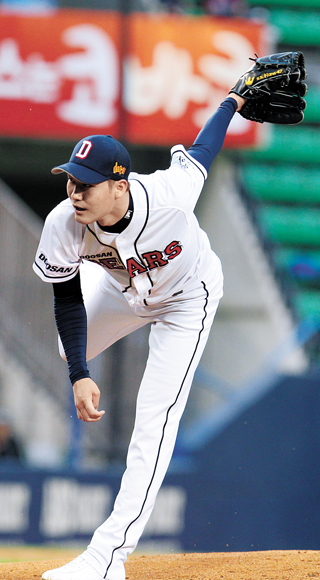 
Doosan Bears’ Hong Sang-sam is back from the military and he is in good shape.

The 26-year-old righty marked his return on Sunday against the Samsung Lions at the eighth inning as the closer for the Bears. He pitched for one and 2/3 innings, grabbing three strikeouts and giving out two hits while tallying a save.

Hong had just been discharged after completing his military service on Saturday and was listed on the Bears’ roster a day after on Sunday, just before the game. The Bears had lost Jung Jae-hoon because of an injury and closer Lee Hyun-seung struggled on the mound so Hong’s return came as good news for the team. And, his first game back was more than enough to satisfy the Bears and their manager Kim Tae-hyeong.

Although Hong had just re-joined the team, he was given an assignment at a pivotal moment of the game. In a seesaw match, the Bears just grabbed a two-run lead and that’s when Hong came into the picture. “I did not know I was going to be substituted in at such a crucial moment,” Hong said later. “I was so nervous I couldn’t think straight.”

But as soon as he came aboard, Hong sprayed 150-kilometer-per-hour (93 mile-per-hour) fastballs and struck out Lee Seung-yuop. He also ran down the runner on base to close out the eighth inning. He came back in the ninth and grabbed back-to-back strikeouts. Although he yielded two hits to the third and fourth batters of the Lions, he flied out the Lions designated hitter, Bae Young-seop, to conclude the inning and the game.

“I thought I would do more harm to the team than good,” he said. “But I am glad to have done a decent job. Hopefully, I can be more help to the team now that I am back.”