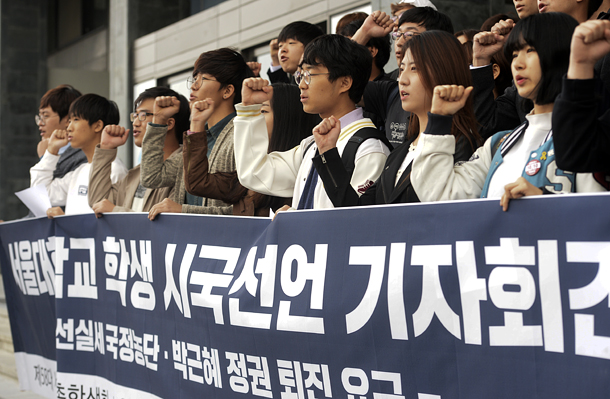 The leadership crisis of President Park Geun-hye escalated as public clamor for her resignation over her friend’s undue influence in state affairs continued on Friday, while her approval rating plummeted to hit a new unprecedented low.

Students of major universities issued statements to demand Park’s resignation on Friday and professors joined the move. Massive rallies to demand her resignation are planned for the coming weekend.

Park and her administration are reeling from their biggest scandal after Choi Soon-sil, her longtime friend, was exposed as having far more influence than she should have - to the point of possibly being a power behind the throne. Park was forced to issue a public apology on Tuesday, but Choi, a daughter of Park’s mentor, the late Choi Tae-min, pleaded her innocence and refused to cooperate with an investigation, though she has since hired a lawyer and said she will cooperate, after all.

The student association of Seoul National University held a press conference on Friday and demanded Park’s resignation. “Democracy and rule of law, the basis of the Republic of Korea, which we earned with our own blood, have been shaken to their roots,” they said. “Choi and other secret allies abused the administrative power of the president.”

Student associations of other universities, including Yonsei, Dongguk and Hongik, also issued similar statements on Friday. Since Ewha Womans University made the first statement on Wednesday, student associations of 40 schools demanded Park’s resignation as of Friday afternoon. Korea University is scheduled to announce its statement on Sunday. Professors for Democracy, an association of professors established in 1987 to fight authoritarian rule, also urged Park to admit her responsibility, lay bare the truth and step down immediately.

Protest rallies were held across the nation throughout this week and a massive demonstration is scheduled to take place on Saturday in central Seoul. An alliance of civic groups hosted its demonstration on Friday and planned a larger candlelight vigil at the Cheonggye Plaza for about 200,000 participants. It warned that it will continue hosting rallies until Park resigns.

According to a Gallup Korea poll released on Friday, after Park issued a 90-second apology on Tuesday, public rage snowballed and her approval rating nosedived to 14 percent, the lowest ever. On Wednesday and Thursday, the approval rating in Park’s political strongholds of Daegu and North Gyeongsang plunged to 19 percent, and older voters, considered key supporters of Park, also withdrew their backing. The Saenuri Party’s approval rating was 26 percent in the latest survey, the lowest ever since the Park administration was launched. The Minjoo Party of Korea recorded 29 percent, beating the ruling party for the first time since Feb. 2013. In addition to stepping down, both ruling and opposition parties are suggesting that Park also dismiss her entire Cabinet and Blue House secretariat.

Ahn Cheol-soo, former chairman of the People’s Party, warned of severe consequences if Park and her aides do not act immediately to take responsibility. “I am strongly warning that the presidential chief of staff and the prime minister must step down immediately,” he said. “How can you ruin this country? How can you betray the people? If this isn’t taken care of, we’ll take care of it for you.”

He also said time is running out and Park’s plummeting approval rating show that she is no longer capable of running the country. Saenuri Chairman Lee Jung-hyun said he visited the Blue House and urged Park to act swiftly to overhaul her secretariat and cabinet. He, however, did not say how Park responded.

The ruling party’s floor leader, Rep. Chung Jin-suk, said he and his counterparts of the opposition Minjoo Party of Korea and the People’s Party will meet with National Assembly Speaker Chung Sye-kyun early next week to consider how to handle the power vacuum in the administration.

“Opposition parties share the responsibility about state affairs,” he said. “Since the administration is hit with the leadership crisis, the National Assembly must act to cope with it.”

The minority opposition Justice Party went further, formally demanding Park’s resignation. The Minjoo Party and the People’s Party, however, said they will not join the move to force her out. Park, however, remained silent and gave no sign of a reshuffle as of Friday afternoon.

“She is deeply reflecting on the people’s insecurity and how to steadfastly run the country,” a senior Blue House official said Friday.

Since the aide said the president was thinking about a way to “steadfastly run the country,” speculations grew that she is not considering the politicians’ demand to surrender by appointing a bipartisan prime minister to manage state affairs. Park was scheduled to host a luncheon with members of the Presidential Committee for Unification Preparation on Friday, but the event was canceled.

At the Local Autonomy Day ceremony in Busan on Thursday, her first public activity outside the Blue House since her public apology on Tuesday, 200 of the 1,000 chairs placed at the venue remained empty.