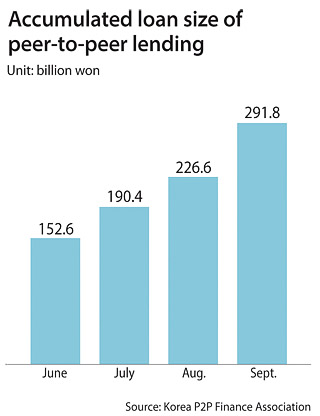 The market size of Korea’s peer-to-peer (P2P) lending industry, which directly connects borrowers with investors, has grown six-fold in just two years, but financial regulators and industry players have barely reached a consensus on how to regulate this nascent business.

The Financial Services Commission issued a guideline on Wednesday that bans individual investors from investing more than 10 million won ($8,750) a year in a P2P lender. The regulatory agency has come under fire for being too draconian and hampering the industry’s growth.

For its part, the Financial Services Commission said the move was intended to protect investors following cases of unauthorized use of funds and illicit fund-raising by market pioneers like Lending Club in the United States.

The Korea P2P Finance Association, a group that represents the country’s P2P business, immediately objected to the guideline, arguing it was too restrictive.

“For many companies, investors who put in more than 10 million won make up more than 60 percent of total investment,” said Lee Seung-haeng, head of the association and CEO of Midrate, a Seoul-based P2P lender.

“This means that clients who invested more than 10 million won are the main customer base for the business,” he said. “If the government caps the maximum investment to 10 million won, the companies are forced to shell out more money for marketing to lure more customers.”

With increased marketing cost, Lee warns that many companies will resort to raising commission fees or interest rates to offset the expense, a pattern that he says will turn away many users from the lending platform.

Lee added that the regulator’s ceiling on the amount of investment is not directly related to the proclaimed purpose of consumer protection.

“To enhance transparency in fund management, there are other measures, such as requiring the companies to hand over users’ funding to a third-party institute,” he said.

At the beginning of last year, when the P2P industry was just beginning to take shape, total investment in the sector stood at 50 billion won. The size then ballooned to nearly 300 billion won by the end of September.

As the market size of the new lending scheme grows, industry players have called for specific guidelines to keep up. “The P2P lending business is a new sector, and we hoped that the financial authorities would draw up specific guidelines,” said a source at a local P2P company who wished not to be named. “But the announced guideline will likely hamper the growth of the industry rather than regulate or protect consumers.”

Ha added that the new rule will make investors diversify their investment, which will lead to lower risk.

For all the ire it has provoked, the guideline does allow for larger investment depending on income. Those earning more than 100 million won a year can invest up to 40 million won.

Lee of the P2P association said the group will continue discussions with the financial regulator since the rules do not reflect the viewpoints of the industry.

“We acknowledge that there needs to be some degree of consumer protection and regulation,” he said, “but the guideline is too excessive and has the possibility of limiting the growth of the P2P business altogether.”

There are currently more than 50 P2P companies in Korea, but the vast majority only began operating last year.