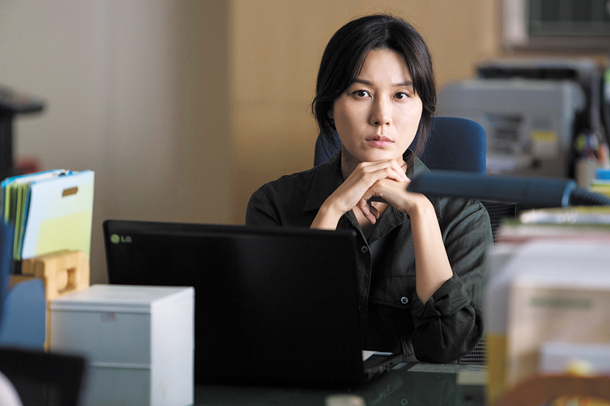 Actress Kim Ha-neul has played teacher roles multiple times over her 20-year career. Kim is set to extend that record by starring as a teacher in “Misbehavior.” [FILAMENT PICTURES]

For audiences, it is no surprise seeing actress Kim Ha-neul playing a teacher on screen. Since the 38-year-old made her debut in 1996, the actress has played a teacher multiple times. And Kim is set to extend that record by playing another teacher in her upcoming movie “Misbehavior,” which is slated to drop on Jan. 4.

Revolving around contracted high school teacher Hyo-ju (Kim), director Kim Tae-yong’s upcoming film unfolds as Hyo-ju’s chance to become a full-time teacher is taken away by Hye-yeong, the rich daughter of the school’s board president played by Yoo In-young. Full of jealousy towards Hye-yeong for having everything she ever dreamed of, Hyo-ju tries to take away one thing that she believes she can - a student dancer named Jae-ha (Lee Won-keun) who is having a secret relationship with Hye-yeong.

“While acting, I paid the biggest attention on my relationship with Hye-yeong,” said Kim during an interview with M Magazine, an affiliate of the Korea JoongAng Daily.

“Hye-yeong threatens Hyo-ju without having specific intentions. There are always those people who seem to have everything that you desire. I tried to highlight and exemplify those feelings towards [Hye-yeong] while acting.”

Although Kim has played teachers three times over her 20-year career, the latest teacher role sets itself apart from the previous ones in that it shows a much darker personality than in her previous parts in the 2002 MBC series “Romance,” the 2003 comedy “My Tutor Friend” and the 2012 SBS drama “A Gentleman’s Dignity.”

In “Romance,” the actress plays a high school’s Korean language teacher that falls in love with one of her students. Although she gets kicked out of the school and is treated poorly by her family once the relationship is discovered, she doesn’t give up on the student she loves. This drama hit a viewership rating of up to as high as 30 percent and led Kim to stardom.

In director Kim Kyung-hyung’s “My Tutor Friend,” Kim’s student once again becomes her love interest. Kim plays a nice tutor that struggles with teaching a defiant student of the same age. Although the film focuses more on comedy rather than romance, her love with the student once again comes true. 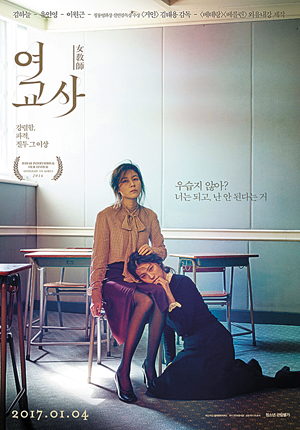 In the SBS series “A Gentleman’s Dignity,” Kim is featured as a high school teacher, teaching ethics. Although her love life gets entangled with a grown-up man, there also is a student character in the series that has a crush on Kim’s character.

Although there are some differences, the roles she had played in the aforementioned three works are all cute and warm-hearted teachers, which is why the character Hyo-ju from her upcoming “Misbehavior” may come as a surprise to those who have become used to Kim’s usual iconic characters.

Although the movie touches on Hyo-ju’s relationship with the student Jae-ha, the reason she approaches him is far from innocent. In one scene, while Hyo-ju is talking to Jae-ha in the teacher’s office, she gives Hye-yeong a boastful look when their eyes meet, which illustrates Hyo-ju’s vicious heart.

“[“Misbehavior”] is a movie that has put me on a new start line,” said Kim when asked what this film means to her. “The very thing that I’m afraid of the most is being perceived as a boring actor, which could make you look as if you have played the same old role from the previous works even if you haven’t. I want to become an actor that can pull off any role in a cool and refreshing way just like [veteran actress] Yoon Yeo-jeong.”