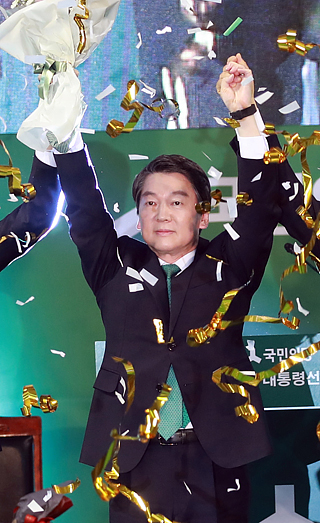 Rep. Ahn Cheol-soo reacts to supporters in Chungmu Gymnasium in Daejeon on Tuesday after he won the nomination of the People’s Party for the upcoming May 9 snap presidential election. [YONHAP]

Ahn Cheol-soo won the People’s Party primary Tuesday by a landslide, placing him in direct competition with Moon Jae-in of the Democratic Party in the presidential election on May 9.

In an acceptance speech at Chungmu Gymnasium in Daejeon, where the Party’s final primary round was held, Ahn promised he would be a president of the people, by the people and for the people, a reference to Abraham Lincoln’s landmark Gettysburg Address.

Promising to overcome political factionalism and avoid any form of strongman rule, he said he would not seek political alliances based on political calculations. “I will not form such a calculated alliance among politicians. I will not help those who opposed impeachment [of former president Park Geun-hye] by including them in an alliance. I will not form an alliance just for the sake of opposing someone.” Ahn’s speech was an obvious rebuttal to growing speculation that he would join forces with the conservative bloc — including pro-Park Geun-hye politicians — to compete against Moon.

The software mogul-turned-politician’s winning of the nomination was inevitable given his sweeping victories in the previous six rounds, in which Ahn prevailed with nearly 70 percent of the votes.

With his clinching of the nomination, the 55-year-old has entered a high-stakes contest to claim the highest elected public office, which both Ahn and Moon aspired to in 2012 but lost despite a short-lived alliance. Four and a half years after the bitter defeat of the 2012 race, which was won by the now detained former President Park Geun-hye, the two men are facing against each other to become the next occupant of the currently empty Blue House.

Park is in jail for investigation, indictment and eventual trial.

Ahn’s victory came just a day after Moon became the Democratic Party nominee. This year’s election is shaping up to be a de facto two-way contest between Moon and Ahn, considering the marginal support for two conservative parties — the Liberty Korea Party (LKP) and the Bareun Party — and the minor progressive Justice Party.

Moon has sustained a solid lead in most polls over the past few months, creating the perception among DP supporters that he will win the presidency no matter what. But Ahn’s approval has been rising over the past few weeks to a point that he actually beat Moon in one poll earlier this week, a feat that shook the Moon camp.

In a hypothetical two-way race between the two, Ahn was ahead of Moon 43.6 to 36.4 percent in a poll conducted by The Opinion this Sunday. The poll had what some saw as a far-fetched premise: that the two conservative parties would consolidate with Ahn to prevent Moon from taking power. But the fact that Ahn scored higher than Moon came as a surprise to the DP, which downplayed the poll by saying the conservative bloc would not drop their bids to join forces with Ahn.

In another virtual two-way race conducted by Research and Research late last month, the two were neck-and-neck: Moon led Ahn 41.7 percent to 39.3 percent, which was within the margin of error.

Sensing the threat from Ahn, the DP is already framing a potential alliance among conservatives and the People’s Party as an attempt by the conservative bloc to extend their grip on power after Park’s downfall.

The Ahn camp insists it is not pursuing such an alliance.

Ahn is more moderate in his political ideology than Moon, a mainstream liberal who served in the administration of the last liberal president, Roh Moo-hyun.

Born in 1963 in Busan, Ahn was admitted to the country’s best medical school, the College of Medicine at Seoul National University. While pursuing a Ph.D degree in medical school in 1988, the soft-spoken Ahn created a vaccine program combating computer viruses. It was his first encounter with the computer world. For the next seven years, Ahn spent days tending patients and nights scrambling to come up with antivirus programs that he would later distribute for free.

Ahn also became the youngest dean of a medical school at the age of 28 at Dankook University in 1990.

“As a doctor who cures people’s illnesses, I discovered that fixing computer viruses with antivirus software was a perfect fit for me,” he said in an interview in 2009. “I took satisfaction and pride in the fact that I was able to help others by letting them use my program for free.”
In 1995, Ahn gave up his medical career and launched the antivirus software firm AhnLab Inc. As a businessman, Ahn did not stop his academic endeavors. Ahn achieved a master’s degree in engineering from University of Pennsylvania and an MBA from the Wharton School of Business in 2008.

In September 2012, the successful entrepreneur threw his hat into the political ring, declaring his bid for the presidency after months of speculation. But it didn’t take long for Ahn to realize his impressive resume had not prepared him for the hardball world of politics. Twenty-seven days before the election, Ahn withdrew from the race after being consistently outmaneuvered by Moon. He tepidly endorsed Moon and actually left Korea for a few weeks.

Fast forward to 2017: Ahn says he will never back down like he did four and a half years earlier. He says he is better in every aspect than Moon as a candidate to become Korea’s next president.

“When I think about chances for victory, hard-needed reform, national unity, a future and development for the Jeolla region, I am the only answer to achieve these goals,” said Ahn last month.